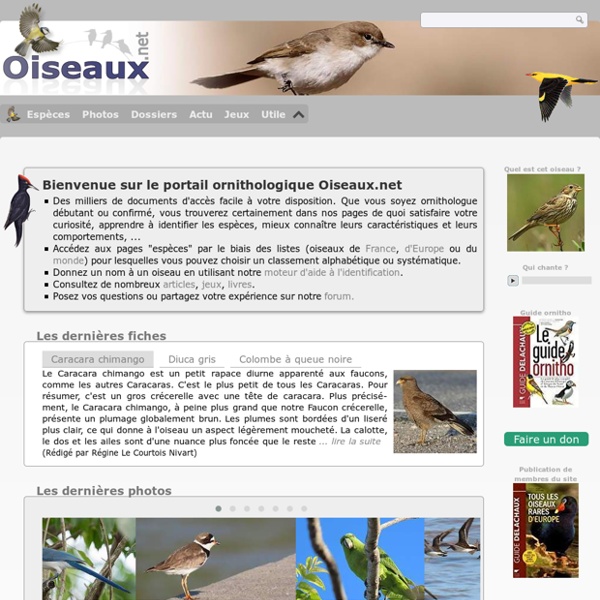 Discover the world's most endangered species Wildscreen's Arkive project was launched in 2003 and grew to become the world's biggest encyclopaedia of life on Earth. With the help of over 7,000 of the world’s best wildlife filmmakers and photographers, conservationists and scientists, Arkive.org featured multi-media fact-files for more than 16,000 endangered species. Freely accessible to everyone, over half a million people every month, from over 200 countries, used Arkive to learn and discover the wonders of the natural world. Since 2013 Wildscreen was unable to raise sufficient funds from trusts, foundations, corporates and individual donors to support the year-round costs of keeping Arkive online. Larus michahellis (Yellow-legged Gull) ARKive {{legendclass}} Protected Areas Imagery Imagery with Labels

Identifying Rooks Top left: Juvenile Rook by Breffni Martin. Bottom left: Adult Rook by John Harding. Right:Carrion Crow by Jill Pakenham. Your online guide to birds and bird watching Cornell Lab of Ornithology All About Birds Search in: Share on facebookShare on emailShare on pinterest_shareShare on twitterMore Sharing Services Features Avibase - La base ornithologique mondiale I am excited to announce a new important addition to Avibase, called myAvibase. This is a new section of the site that provides tools for planning your next birding trip and manage your own personal checklists. You can use maps and graphs to quickly see how many species can be found in a given region and at various times of year, for instance. South Africa: Don't strip protections for elephants! Antony Mcgowan, United Kingdom Nov 21, 15:32 Morgaine Wakelin, New Zealand Nov 21, 15:26

Elachuridae: Ornithologists Describe New Family of Passerine Birds A group of ornithologists led by Dr Trevor Price of the University of Chicago has described a new family of birds that is represented by just one species, the Spotted wren-babbler. The Spotted wren-babbler (Elachura formosa), a painting by John Gerrard Keulemans, 1892. The Spotted wren-babbler is a small perching bird found in China, India, Nepal, Bangladesh, Bhutan, Laos, Myanmar and Vietnam. This bird measures about 10 cm in length and has a short tail. It is brown above, white below, with rufous wings. It also has white speckles all over its body.

4 Poisonous Birds Toxins: they're not just for snakes and spiders! While no bird currently known to science wields a venomous bite, a fair number do in fact release noxious poisons from their skin, making them dangerous to consume... including one species upon which humans have been precariously dining for centuries. Here's a quartet of toxic avians. 1. Hooded Pitohui (Pitohui dichrous) Though New Guinea natives have long known that these stunning orange and black songbirds (above) are indeed quite poisonous, the scientific community didn't catch on until relatively recently as explained in this video:

Cecil the lion's killer joins long list of big game hunters skewered on social media In the jungle, the mighty jungle, poor Cecil the lion no longer sleeps tonight. After news broke that the beloved big cat was killed by a dentist from Minnesota, the hunter, Walter Palmer, quickly became “the most hated man in America who never advertised Jell-O pudding on television”, according to Jimmy Kimmel. Palmer is reportedly receiving death threats and a deluge of horrible Yelp reviews, and it probably goes without saying that his patients are likely hunting themselves – for a new dentist. But Palmer is by no means the first big game trophy hunter to get skewered online for their exploits. The Trump Kids