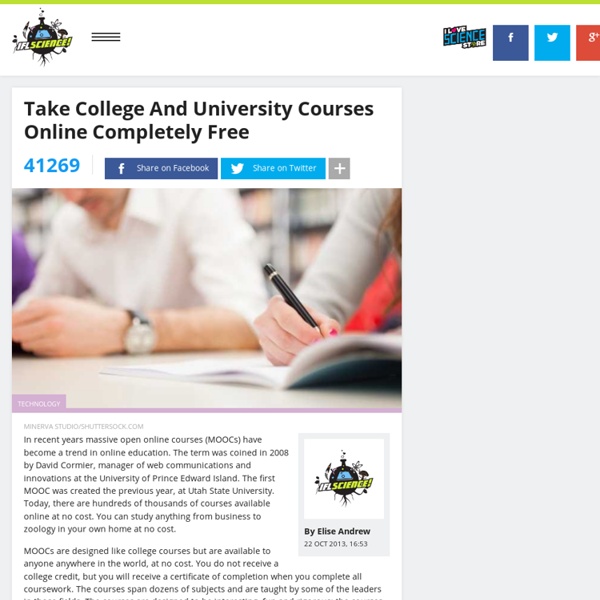 In recent years massive open online courses (MOOCs) have become a trend in online education. The term was coined in 2008 by David Cormier, manager of web communications and innovations at the University of Prince Edward Island. The first MOOC was created the previous year, at Utah State University. Today, there are hundreds of thousands of courses available online at no cost. You can study anything from business to zoology in your own home at no cost. MOOCs are designed like college courses but are available to anyone anywhere in the world, at no cost. Coursera is perhaps the most well-known of the online education facilitators. EdX is another non-profit course site created by founding partners Harvard and MIT and based in Cambridge, Massachusetts. MIT has their own open courseware, where most of the materials used in the teaching of almost all of MIT's subjects are available on the Web, free of charge. European institutions are also getting in on the act.

FREE Interactive Learning OpenCourseware from MIT, UC Berkeley, Harvard, Yale, Stanford, U Houston, USC, UCLA, Khan Academy, NPTEL General description: Language may refer either to the specifically human capacity for acquiring and using complex systems of communication, or to a specific instance of such a system of complex communication. The scientific study of language in any of its senses is called linguistics. The approximately 3,000–6,000 languages that are spoken by humans today are the most salient examples, but natural languages can also be based on visual rather than auditory stimuli, for example in sign languages and written language. Codes and other kinds of artificially constructed communication systems such as those used for computer programming can also be called languages. A language in this sense is a system of signs for encoding and decoding information. The English word derives ultimately from Latin lingua, "language, tongue", via Old French.

History: Free Online Courses Advertisement Get free History courses online from the world's leading universities. You can download these audio & video courses straight to your computer or mp3 player. For more online courses, visit our complete collection, 1,250 Free Online Courses from Top Universities. mechanisms-steampunk-armored.html?fb_action_ids=10151937692971805&fb_action_types=og Vladimir Gvozdeff's illustration series Mechanisms depicts a wonderful bestiary of armored, mechanical creatures in steampunk style, surrounded by the detritus of contrafactual Victorian inventorship. Some of my favorites after the jump: владимир гвоздев & gvozdariki (via Pipe Dream Dragon) "But it's not fair!" Teach Your Kids How to be "Fair Aware" One of the first protests children shout when they feel upset is, “That’s NOT FAIR!” Parents can tire themselves counting an even number of Cheerios into bowls or making sure each child gets a turn pressing the elevator button, but children might still feel life is unfair until they understand the underlying root feelings and what fair and equal mean. To help children understand the concept of fair and equal and the intense emotions often driving those beliefs, parents can use these steps to grow fairness awareness. Explain the difference between equal and fair. Equal is when things are exactly alike, whereas fair is when decisions are made based on individual needs. It is equal to put all the kids to bed at the same time, and fair when parents decide on bedtime based on the age and activity level of the child.

About The third is community. We believe learning should be as rich and varied as the world you're learning about. So with our community we're building a kind of multimedia wonderland of learning, where videos, audio, usage, mnemonics, etymologies and much more bring your learning to life. We believe that every learner is partly a teacher, and we hope that once you get started, you'll soon be supplying little nuggets of wit and wisdom to help the rest of the community as they learn!

How to Do What You Love January 2006 To do something well you have to like it. That idea is not exactly novel. We've got it down to four words: "Do what you love." But it's not enough just to tell people that. 10 Career Tips From ASOR Members ASOR’s membership spans across many fields of study. We’re fortunate to have historians, geologists, archaeologists, and so many more among our ranks. Every year, we come together to discuss discoveries in the field and our research at the ASOR Annual Meeting. The Annual Meeting is not only a place to present scholarly work, but also a place for networking and catching up with old friends – or making new ones.