Sieve of Eratosthenes : nrich.maths.org. You will need to print one copy of this 2-100 master grid, and a copy of this sheet of smaller grids. 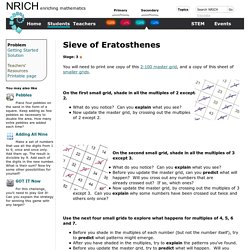 On the first small grid, shade in all the multiples of 2 except 2. What do you notice? Can you explain what you see? A mind-bending atlas of all the weirdest sh*t in mathematics is now online. Mathematicians from around the world are working together to do something that's never been done before - build a huge atlas full of all the most mind-boggling ideas at the cutting edge of mathematics and science. 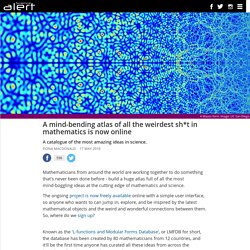 The ongoing project is now freely available online with a simple user interface, so anyone who wants to can jump in, explore, and be inspired by the latest mathematical objects and the weird and wonderful connections between them. So, where do we sign up? LMFDB - The L-functions and modular forms database. Mathematician pair find prime numbers aren't as random as thought. (Phys.org)—A pair of mathematicians with Stanford University has found that the distribution of the last digit of prime numbers are not as random as has been thought, which suggests prime's themselves are not. 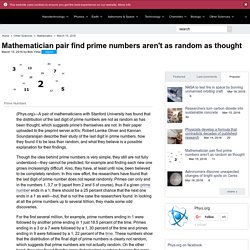 In their paper uploaded to the preprint server arXiv, Robert Lemke Oliver and Kannan Soundararajan describe their study of the last digit in prime numbers, how they found it to be less than random, and what they believe is a possible explanation for their findings. Though the idea behind prime numbers is very simple, they still are not fully understood—they cannot be predicted, for example and finding each new one grows increasingly difficult. Also, they have, at least until now, been believed to be completely random.

In this new effort, the researchers have found that the last digit of prime number does not repeat randomly. "What Is 0 Divided By 0" Is The Most Google Searched Question Of 2015. Google has been our savior at multiple occasions and 2015 was no exception in this regard. 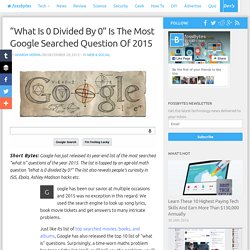 We used the search engine to look up song lyrics, book movie tickets and get answers to many intricate problems. Just like its list of top searched movies, books, and albums, Google has also released the top 10 list of “what is” questions. Surprisingly, a time-worn maths problem has topped the list. Well, as I’ll tell you the problem, you’ll be a little bit disappointed: What is 0 divided by 0? While we expect the most people to answer this question instantly, it looks like this isn’t the truth.

The Wikipedia answers this question in following words: In mathematics, division by zero is division where the divisor (denominator) is zero. Earlier in June, it was discovered that Siri gets sassy when she’s asked this question. Imagine that you have zero cookies and you split them evenly among zero friends. See? Mathematical equations that changed the world. Binary number. History[edit] The modern binary number system was discovered by Gottfried Leibniz in 1679 and appears in his article Explication de l'Arithmétique Binaire. 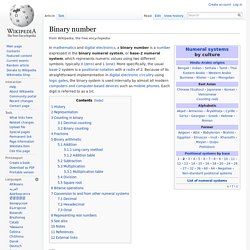 The full title is translated into English as the "Explanation of the Binary Arithmetic", which uses only the characters 1 and 0, with some remarks on its usefulness, and on the light it throws on the ancient Chinese figures of Fu Xi.[1] (1703). Leibniz's system uses 0 and 1, like the modern binary numeral system. As a Sinophile, Leibniz was aware of the Yijing (or I-Ching) and noted with fascination how its hexagrams correspond to the binary numbers from 0 to 111111, and concluded that this mapping was evidence of major Chinese accomplishments in the sort of philosophical mathematics he admired.[2] Leibniz was first introduced to the I Ching through his contact with the French Jesuit Joachim Bouvet, who visited China in 1685 as a missionary. 0 0 0 1 numerical value 20 0 0 1 0 numerical value 21 0 1 0 0 numerical value 22 Fractions[edit] Heron's formula.

This article is about calculating the area of a triangle. 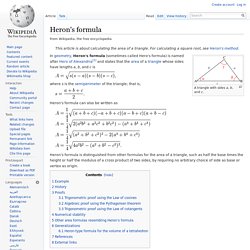 For calculating a square root, see Heron's method. A triangle with sides a, b, and c. List of things named after Leonhard Euler. In mathematics and physics, there are a large number of topics named in honor of Leonhard Euler, many of which include their own unique function, equation, formula, identity, number (single or sequence), or other mathematical entity. 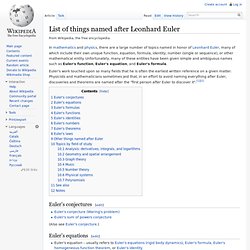 Unfortunately, many of these entities have been given simple and ambiguous names such as Euler's function, Euler's equation, and Euler's formula. Euler's work touched upon so many fields that he is often the earliest written reference on a given matter. Physicists and mathematicians sometimes jest that, in an effort to avoid naming everything after Euler, discoveries and theorems are named after the "first person after Euler to discover it".[1][2] Euler's conjectures[edit] Euler's equations[edit] Center of mass. This child's toy uses the principles of center of mass to keep balance on a finger. 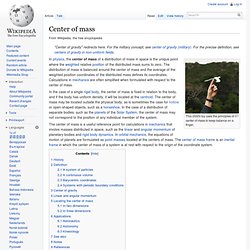