32 Books That Will Actually Change Your Life 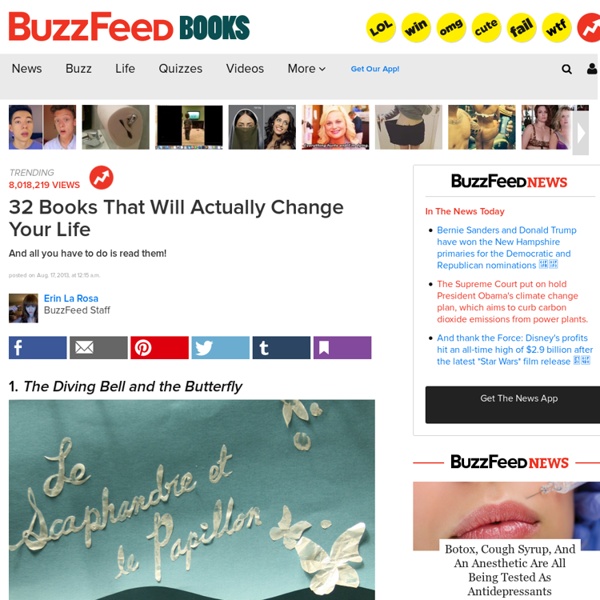 Related:  books etc • cyclecat • And Exhale • So many books, so little time... • Literature

8 Excellent, Must-Read, Non New-Agey Spiritual Books We live in a paradoxical, postmodern culture of overstimulation and shallowness — obesity next to hunger; superficial celebrity gossip next to ignored people living in or near poverty; cheap fast food next to prohibitively expensive, genetically modified, supposedly organic gourmet cuisine; 24/7 fake news media next to endless hours of “reality” TV; bloggers blogging blasphemies next to twits tweeting trivialities. It all comes down to seeking a sense of control and instant gratification. Reading is great because it slows us down.

The Plusses and Pitfalls of Teaching Online By Dan Ariely Dan Ariely is not just a great and funny teacher, but he’s dedicated his life to making the world a somewhat better place. To that end, he’s produced an online course on behavioral economics that already has attracted 140,000 students.

Designer Alexandra Khitrova Discovers a New Career through Her Stunning Fantasy Concept Art Early last year motion graphics artist and Alexandra Khitrova decided to utilize some of the digital tools she had acquired in her profession to explore concept illustration. While she did study art in school, this was an entirely new creative realm, a pet project to explore realms of science fiction and fantasy where flying dragons mingled with terrifying storms and otherworldly beings were brought to life on the screen. The reaction online and off was swift, and Khitrova soon found herself working on increasingly complex drawings as she suddenly began to get commissions. Now, only a year later, she is already working with a team of writers and artists on a feature film.

The Greatest Books of All Time, As Voted by 125 Famous Authors by Maria Popova Why Tolstoy is 11.6% better than Shakespeare. “Reading is the nourishment that lets you do interesting work,” Jennifer Egan once said. This intersection of reading and writing is both a necessary bi-directional life skill for us mere mortals and a secret of iconic writers’ success, as bespoken by their personal libraries. The Top Ten: Writers Pick Their Favorite Books asks 125 of modernity’s greatest British and American writers — including Norman Mailer, Ann Patchett, Jonathan Franzen, Claire Messud, and Joyce Carol Oates — “to provide a list, ranked, in order, of what [they] consider the ten greatest works of fiction of all time– novels, story collections, plays, or poems.” Of the 544 separate titles selected, each is assigned a reverse-order point value based on the number position at which it appears on any list — so, a book that tops a list at number one receives 10 points, and a book that graces the bottom, at number ten, receives 1 point.

#YesAllWomen Should Read These Books—and Men Should Too Told only not to “burn the house down,” a Maryland scientist invented a revolutionary pancreatic-cancer detection test in his parents’ basement, and he has already won hundreds of thousands of dollars in prizes. He’ll graduate from high school next year. A Washington, D.C., athlete has gone from homeless to the brink of pro tennis stardom but is too young to drive himself to matches. Neither can an 11-year-old golfer in California who just qualified to compete against adult professionals more than twice her age. Nothing like child prodigies—whiz kids who have accomplished more in a few short years than many of us will in a lifetime—to stir feelings of underachievement. This article was created in association with the social action campaign for The Internet’s Own Boy, which is being released by TakePart’s parent company, Participant Media, and filmbuff.

Chalking the Door: An Epiphany Tradition - Building Faith “We celebrate the themes of this season and once again to seek God’s blessing on their homes and on those who come and go through its doors.” What is Chalking the Door? This short liturgy is a way of marking our homes, usually at the front or main entrance, with sacred signs and symbols as we ask God’s blessing upon those who live, work, or visit throughout the coming year. In Exodus, the Israelites marked their doors with blood so that the Lord would pass over their homes; but in this service, we mark our doors with chalk as a sign that we have invited God’s presence and blessing into our homes In Great Britain, the service commonly takes place on Twelfth-Night, January 6th. This date is also observed as Epiphany, commemorating the visiting of the Christ Child by the three Magi (Wise Men) with their gifts of gold, incense, and myrrh.

How to Travel the World on $35 a Day: 100 Resources for Broke Globetrotters Probably the best time for traveling the world is when you’re young. You’ve got little to no real responsibilities and you’re still spontaneous enough to try almost anything. The down side? 10 Books That Have Never Left You – What Are Your 10? Recently a friend tagged me on Facebook and challenged me to, without thinking too hard, make a list of 10 books that have stayed with me in some way after reading them. This really gave me pause, as I feel like most books I read stick with me long after I’ve read them—but that’s the beauty of books. One of the best parts of this challenge, I’ve noticed, isn’t so much the championing of my favorite books, it’s seeing the lists that others are posting. Some are classics, some are books I’ve read, and some are books I’ve never even heard of.

Food Foraging: Find and Enjoy Wild Edible Plants We owe a lasting debt of gratitude to the desperate soul who “discovered” the oyster or stewed that first possum. In the early, hit-or-miss days of foraging, our ancestors learned the hard way about the laxative properties of the senna plant, and to eat only the stems of rhubarb and not the poisonous leaves. Through trial and the occasional fatal error, we sorted the edible from the inedible, the useful from the harmful.

Eleven Untranslatable Words From Other Cultures, by Ella Frances Sanders The relationship between words and their meaning is a fascinating one, and linguists have spent countless years deconstructing it, taking it apart letter by letter, and trying to figure out why there are so many feelings and ideas that we cannot even put words to, and that our languages cannot identify. The idea that words cannot always say everything has been written about extensively -- as Friedrich Nietzsche said, "Words are but symbols for the relations of things to one another and to us; nowhere do they touch upon the absolute truth." No doubt the best book we’ve read that covers the subject is ‘Through The Language Glass’ by Guy Deutscher, which goes a long way to explaining and understanding these loopholes -- the gaps which mean there are leftover words without translations, and concepts that cannot be properly explained across cultures. Somehow narrowing it down to just a handful, we’ve illustrated 11 of these wonderful, untranslatable, if slightly elusive, words.

How to set up a password manager. iStock You use the same password for lots of different websites. It’s OK. Everyone does it. The Stereotype Map Of Every U.S. State — According To British People Liberal Americans love the Brits. We think they’re hella cool, especially their sense of humor. BuzzFeed U.K. asked its staff to share the stereotypes that they have of every state in the U.S. Top 10 Best Novels of the Last 20 Years Books The ten novels on this list all substantiate the belief that books are the most elastic, introspective, human and entertaining form of media that exist. Not movies, not music, not art, not the theatre. A famous author once said that novels are the best way for two human beings to connect with each other. I believe this, and I believe that people who do not find pleasure in words have never had the opportunity to read one of the great novels.

Related:  Books to read • libros • Moleskine Made • Readlist
Related:  Books, articles and more   -  liVIIdeos   -  life-changing?   -  books etc   -  cyclecat   -  And Exhale   -  So many books, so little time...   -  Literature   -  changing the world   -  4 Sites with LOTS Of Completely Free Ebooks That Don't Suck   -  102 Resources for Fiction Writing « Here to Create   -  276 QUESTIONS TO ASK BEFORE YOU MARRY   -  25 Reasons Why You Should Dress Up Every Day – College Fashion   -  Neil deGrasse Tyson Lists 8 (Free) Books Every Intelligent Person Should Read   -  THE WORLD GEOGRAPHY: 9 Unique & Unusual Travel Destinations   -  PoeWar | 10 days of character building wrap up   -  How to Travel the World on $35 a Day: 100 Resources for Broke Globetrotters | Travelhacker   -  Five Books That Changed My Life - Remy Carreiro   -  Map It: DIY It | The Row House Nest   -  The Gallipoli campaign - The Gallipoli campaign | NZHistory, New Zealand history online   -  Well, At Least There Was Good Stuff to Read: The Books of the Decade | Books | The L Magazine - New York City's Local Event and Arts & Culture Guide   -  Vintage Ads for Libraries and Reading | Brain Pickings   -  GF2045 - Future Human Evolution Uses Advanced Technology to Achieve Immortality   -  Transhumanist Values   -  Personalize Learning: 10 Predictions for Personalized Learning for 2013   -  A Printable Guide to Social Media [#Infographic] | EdTech Magazine   -  Ten Tips for Becoming a Connected Educator   -  The Psychology of Language: Which Words Matter the Most When We Talk   -  How to Become a Morning Person | Greatist   -  100 Greatest Free Fonts Collection for 2013   -  Esoteric Agenda - Full Documentary - YouTube   -  Advent of Google means we must rethink our approach to education | Education | The Guardian   -  The Ultimate Towel Folding Guide [Infographic]   -  Stock Photography, Royalty-Free Images, Motion and Talent | National Geographic Creative   -  The onrushing wave   -  Google for Education   -  Playfully Adorable Illustrations That Will Make You Smile - My Modern Metropolis   -  No cookies?   -  50 Soups : Recipes and Cooking : Food Network   -  AI, Robotics, and the Future of Jobs