AI, Robotics, and the Future of Jobs 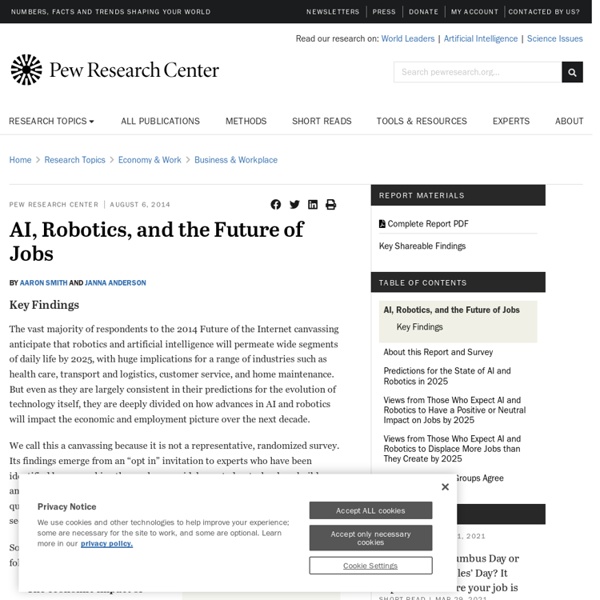 Key Findings The vast majority of respondents to the 2014 Future of the Internet canvassing anticipate that robotics and artificial intelligence will permeate wide segments of daily life by 2025, with huge implications for a range of industries such as health care, transport and logistics, customer service, and home maintenance. But even as they are largely consistent in their predictions for the evolution of technology itself, they are deeply divided on how advances in AI and robotics will impact the economic and employment picture over the next decade. We call this a canvassing because it is not a representative, randomized survey. Its findings emerge from an “opt in” invitation to experts who have been identified by researching those who are widely quoted as technology builders and analysts and those who have made insightful predictions to our previous queries about the future of the Internet. (For more details, please see the section “About this Report and Survey.”)

Oakland Pilot Project The idea of “Basic Income” is as follows: give everyone a basic, livable wage without any restrictions, and society’s poverty problems will work themselves out. It’s an expensive thesis that is surprisingly more complex than just “give everyone money,” and Silicon Valley incubator Y Combinator is ready to give the hypothesis a test run in Oakland, California. Y Combinator’s brand new research division, YC Research, has chosen the “Basic Income” plan as its first major project. To help study its efficacy and feasibility, the incubator has chosen Oakland as the site of its new pilot project test.

The Next Evolution of SCOTUS Predictions: Predicting 7,000 Cases Over 60 Years with 71% Accuracy In 2009, I created FantasySCOTUS. What started off as a joke, and began as a hastily-put-together website, has grown beyond my wildest imagination. Now, we have over 20,000 players who make predictions about how the Justices will decide cases. In an article I co-authored in 2011, we found that our prediction market was strikingly accurate, with the power predictors hitting a 75% accuracy rate in a given year. Today, I am proud to announce the next evolution in Supreme Court prediction. Rather than relying on human predictions, my colleagues and I have developed an algorithm that can predict any case decided by the Supreme Court, since 1953, using only information available at the time of the cert grant.

Does your leadership team understand the true impact of intelligent technology? Pat Chapman-Pincher posted this on Professor Stephen Hawking believes artificial intelligence could spell the end of the human race. Others are less pessimistic. Rollo Carpenter, creator of Cleverbot, says: “I believe we will remain in charge of the technology for a decently long time and the potential of it to solve many of the world problems will be realised”.

Martin Luther King's Economic Dream: A Guaranteed Income for All Americans - The Atlantic One of the more under-appreciated aspects of Dr. Martin Luther King, Jr.'s legacy is that by the end of his career, he had fashioned himself into a crusader against poverty, not just among blacks, but all Americans. Jason Kottke: How does a computer program compare to the Web's best link blogger? I asked my colleague Chris Wilson to build a robotic Jason Kottke because the human version looked like he could use a break. Kottke launched his eponymous site in 1998, back when blogging was just getting started. The Web has changed enormously in that time, but Kottke.org remains as vital as ever. The future of jobs: The onrushing wave IN 1930, when the world was “suffering…from a bad attack of economic pessimism”, John Maynard Keynes wrote a broadly optimistic essay, “Economic Possibilities for our Grandchildren”. It imagined a middle way between revolution and stagnation that would leave the said grandchildren a great deal richer than their grandparents. But the path was not without dangers.

Nixon’s Basic Income Plan Our new issue, “Between the Risings,” is out now. To celebrate its release, international subscriptions are $25 off, and limited prints of our Easter 1916 cover are available. It was the summer of ’68, the end of the decade that brought us flower power and Woodstock, rock and roll and Vietnam, Martin Luther King and a feminist revolution. Futurium Advances in robotics, artificial intelligence, machine learning and natural user interfaces will have wide repercussions for society and economy in the coming 20-30 years. Future robotic systems, for instance, will operate autonomously alongside humans and assist them in complex manufacturing tasks. Also, they will be able to conduct certain service tasks such as cleaning or maintenance completely on their own. The Human Impact Of The Industrial Internet Of Things Editor’s note: Bruno Berthon is the managing director of digital strategy at Accenture. Will digital technology be positive for workers and jobs? Amid today’s public debate about the consequences of artificial intelligence and advanced robotics, along comes the industrial Internet of things (IIoT). Little understood but potentially very significant for multiple industry sectors, this next wave of technology will create more jobs than it will destroy, according to the majority of business leaders Accenture has surveyed. The industrial Internet of things is a fast-growing network of intelligent connected devices, machines and objects. It will certainly automate and drive efficiencies, but the optimism of employers reflects their recognition that, more importantly, it will enable the creation of entirely new products and services and markets.

The Next Big Social Idea: Unconditional Basic Income In 2014, serious voices from Pope Francis to Thomas Piketty, in his book Capital in the Twenty-First Century, have lamented ever-widening inequality. Others have expressed concern that “the second machine age“ of digital technologies will entail the massive elimination of jobs. Few, however, have proposed policy solutions equal to the scale of the problem. But there is one proposal — perhaps the next big social idea — that has emerged: Unconditional Basic Income. The UBI is a monthly monetary income granted every month, unconditionally, by a political community to each of its members from birth.

R is for "robot": interview with Tom Bonkenburg Material Handling November 10, 2014 thought leaders | The DC Velocity Q & A R is for "robot": interview with Tom Bonkenburg We're likely to see more robots in DCs within the decade. Analysis & opinions Half a century of growth and modernisation have increased average life expectancy in the Gulf by over 30 years. But it has also shifted lifestyle patterns, bringing new health challenges due to poor diet and sedentary lifestyles, with a sharp rise in diabetes, cancer and cardiovascular disease. See our info graphic, sponsored by Philips, on the modern history of health in the Gulf. From The Economist Intelligence Unit