The future of jobs: The onrushing wave 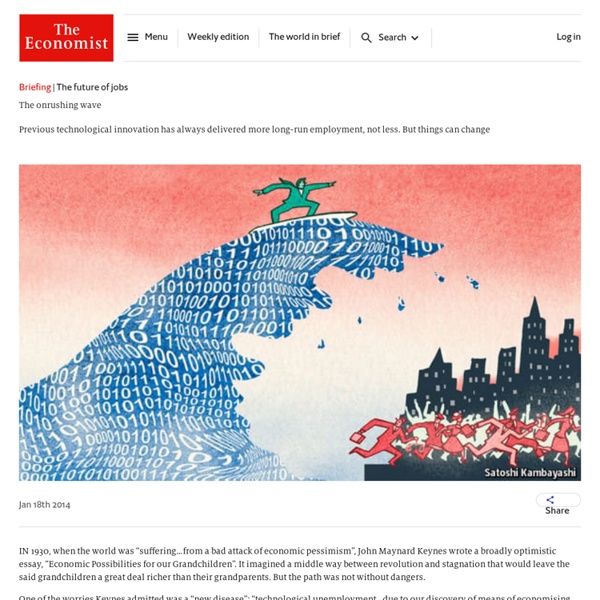 IN 1930, when the world was “suffering…from a bad attack of economic pessimism”, John Maynard Keynes wrote a broadly optimistic essay, “Economic Possibilities for our Grandchildren”. It imagined a middle way between revolution and stagnation that would leave the said grandchildren a great deal richer than their grandparents. But the path was not without dangers. One of the worries Keynes admitted was a “new disease”: “technological unemployment…due to our discovery of means of economising the use of labour outrunning the pace at which we can find new uses for labour.” His readers might not have heard of the problem, he suggested—but they were certain to hear a lot more about it in the years to come. For the most part, they did not. For much of the 20th century, those arguing that technology brought ever more jobs and prosperity looked to have the better of the debate. When the sleeper wakes Be that as it may, drudgery may soon enough give way to frank unemployment. The lathe of heaven Related:  Future Work

The Rich and Their Robots Are About to Make Half the World's Jobs Disappear Two hugely important statistics concerning the future of employment as we know it made waves recently: 1. 85 people alone command as much wealth as the poorest half of the world. 2. 47 percent of the world's currently existing jobs are likely to be automated over the next two decades. Combined, those two stats portend a quickly-exacerbating dystopia. As more and more automated machinery (robots, if you like) are brought in to generate efficiency gains for companies, more and more jobs will be displaced, and more and more income will accumulate higher up the corporate ladder. The inequality gulf will widen as jobs grow permanently scarce—there are only so many service sector jobs to replace manufacturing ones as it is—and the latest wave of automation will hijack not just factory workers but accountants, telemarketers, and real estate agents. That's according to a 2013 Oxford study, which was highlighted in this week's Economist cover story.

What is a Book Sprint? | BookSprints.net A Book Sprint brings together a group to produce a book in 3-5 days. There is no pre-production and the group is guided by a facilitator from zero to published book. The books produced are high quality content and are made available immediately at the end of the sprint via print-on-demand services and e-book formats. The Sprint Table Zero to book in 5 days. There are three important outcomes from Book Sprints: * Producing a book* Sharing knowledge* Team/community building Books Sprints produce great books and they are a great learning environment and team-building process. This kind of spectacular efficiency can only occur because of intense collaboration, facilitation and synchronous shared production environments. There are five main parts of a Book Sprint (thanks to Dr D. 1. Here are some interesting articles that provide more detail on the process: * 0 to Book in 3 Days? BookSprints.net is where the Book Sprint methodology all started.

Meet "Smart Restaurant": The Minimum-Wage-Crushing, Burger-Flipping Robot With a seemingly endless line of talking-heads willing to ignore essentially every study that has been undertaken with regard the effects of raising the minimum-wage; and propose what is merely populist vote-getting 'benefits' for the ever-increasing not-1% who benefitted from Ben Bernnake's bubbles - we thought the following burger-flipping robot was a perfect example of unintended consequences for the fast food industry's workers. With humans needing to take breaks, have at least 4 weekend days off per month, and demanding ever-increasing minimum-wage for a job that was never meant to provide a 'living-wage', Momentum Machines - a San Francisco-based robotics company has unveiled the 'Smart Restaurants' machine which is capable of making ~360 'customized' gourmet burgers per hour without the aid of a human. First Jamba Juice, then Applebees, next McDonalds... No human hand touched this hamburger. It was made entirely by robots

Quantum computing and new approaches to Artificial Intelligence could get the resources to achieve real breakthroughs in computing Ramez Naam made a case against a technological Singularity will take longer. Ramez gives examples and problems to achieving an intelligence explosion * the complexity of important problems like computational chemistry have exponentially increasing complexity - if designing intelligence is an N^2 problem, an AI that is 2x as intelligent as the entire team that built it (not just a single human) would be able to design a new AI that is only 70% as intelligent as itself * There are already entities with vastly greater than human intelligence working on the problem of augmenting their own intelligence. Let's focus on as a very particular example: The Intel Corporation. * should Intel, or Google, or some other organization succeed in building a smarter-than-human AI, it won't immediately be smarter than the entire set of humans and computers that built it, Quantum computers have the technological potential to more rapidly crack larger exponentially complex problems. Silicon quantum dots

Technology Isn't Destroying Jobs; It's Creating Them A study backed by over 140 years of data refutes the claim that technology is destroying the job market. Where one avenue closes in the jobs market, others open, states a report that studied job census data from England and Wales since 1871. That’s not to say that the fear that robots are taking over laborious processes is unjustified. From the 1800s, Luddites smashed weaving machines, and nowadays retail staff worry about being replaced by automatic checkouts. The battle between man and machine does indeed exist in the physical labor industry, with jobs such as agricultural labor and launderers plummeting over the decades. The decrease of agricultural laborers over time; Image by England and Wales Census records However, the study, conducted by economists at the consultancy Deloitte, argues that this debate is often skewed to highlight the job-destroying effects of technology. The shift in professions; Image by England and Wales Census records

Alejandro Jodorowsky Alejandro Jodorowsky (Spanish: [aleˈxandɾo xoðoˈɾofski]; born 17 February 1929)[1][2][3] is a Chilean[4][5] filmmaker, playwright, play director, actor, author, poet, musician, comics writer and spiritual guru. Best known for his avant-garde films, he has been "venerated by cult cinema enthusiasts" for his work which "is filled with violently surreal images and a hybrid blend of mysticism and religious provocation".[6] Born to Jewish-Ukrainian parents in Chile, Jodorowsky experienced an unhappy and alienated childhood, and so immersed himself in reading and writing poetry. Dropping out of college, he became involved in theater and in particular mime, working as a clown before founding his own theater troupe, the Teatro Mimico, in 1947. Moving to Paris in the early 1950s, Jodorowsky studied mime under Étienne Decroux before turning to cinema, directing the short film Les têtes interverties in 1957. Biography[edit] Early years (1929–1952)[edit] Dune and Tusk (1975–1980)[edit] Comics[edit]

Here's a group that's pushing for a universal basic income in the United States In Brief A new lobbying group focusing on the universal basic income has been launched in the United States. What It Is Basic Income Action claims that it is the first national organization in the United States to push for a universal basic income. The UBI is a concept that would give a certain amount of money to all of a country’s citizens regardless of whether they qualify for welfare or other means-tested entitlements. The lobby plans to borrow campaigning techniques from marriage equality and cannabis legalization to put on events in DC, New York, Massachusetts, Minnesota, Louisiana, Oregon, Washington, and California. The Implications The idea behind a UBI is old but has gained credibility in recent years as anxiety about automation brings into question whether there will be many good jobs in sectors like manufacturing in the coming years.

The future of medicine | Playlist Now playing One hundred sixty years after the invention of the needle and syringe, we’re still using them to deliver vaccines; it’s time to evolve. Biomedical engineer Mark Kendall demos the Nanopatch, a one-centimeter-by-one-centimeter square vaccine that can be applied painlessly to the skin. He shows how this tiny piece of silicon can overcome four major shortcomings of the modern needle and syringe, at a fraction of the cost. ‘Natural’ sounds improve mood and productivity, study finds (credit: iStock) Playing natural sounds such as flowing water in offices could boost worker moods and improve cognitive abilities in addition to providing speech privacy, according to a new study from researchers at Rensselaer Polytechnic Institute. An increasing number of modern open-plan offices employ sound masking systems such as “white noise” that raise the background sound of a room so that speech is rendered unintelligible beyond a certain distance and distractions are less annoying. “If you’re close to someone, you can understand them. Braasch and his team are currently testing whether masking signals inspired by natural sounds might work just as well, or better, than white noise. Recently, Braasch and his graduate student Alana DeLoach built upon those results to start a new experiment. The natural sound used in the experiment was designed to mimic the sound of flowing water in a mountain stream.