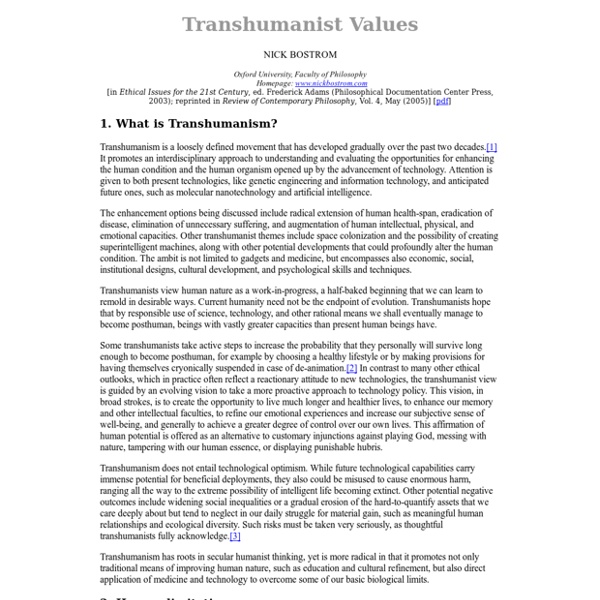 1. What is Transhumanism?Transhumanism is a loosely defined movement that has developed gradually over the past two decades.[1] It promotes an interdisciplinary approach to understanding and evaluating the opportunities for enhancing the human condition and the human organism opened up by the advancement of technology. The limitations of the human mode of being are so pervasive and familiar that we often fail to notice them, and to question them requires manifesting an almost childlike naiveté. Existential risk – one where an adverse outcome would either annihilate Earth-originating intelligent life or permanently and drastically curtail its potential. Several recent discussions have argued that the combined probability of the existential risks is very substantial. Related:  Changing humanity

Genetically Engineered Mosquitoes and Moths Ready to Spread Like Wildfire 21st December 2015 By Dr. Joseph Mercola Guest Writer for Wake Up World While countries around the globe are still assessing the risks – and experiencing the environmental backlash – of genetically engineered (GE) plants, biotech companies are moving on to their next targets – insects. The latest science project, courtesy of researchers from the University of California, is mosquitoes genetically engineered to stop the spread of malaria. ‘We Could Unleash Monsters’ The researchers injected Anopheles stephensi mosquitoes with a segment of DNA code that makes them resistant to the parasite that causes malaria. In a recent study, 99.5 percent of the GE mosquitoes’ offspring carried the malaria-blocking genes.[1] If the mutant mosquitoes are released into the wild, thereby mating with wild populations, their modified DNA would pass freely onto their offspring. But at what expense? “What’s scarier? Once ‘Gene Drive’ Technology Is Released, There’s No Going Back As reported by The Washington Post:

The 100 Best Web 2.0 Classroom Tools Chosen By You The Wordle of this list! (Click image to enlarge) One of the most popular posts on Edudemic in 2010 was The 35 Best Web 2.0 Classroom Tools Chosen By You and I felt it might be time for an update to that list for 2011. In order to put together a list of the best Web 2.0 classroom tools, I polled my Twitter followers, Facebook fans (are they still called fans? Likes?) and ran a contest to try and get as many submissions as possible. There were more than 900 submissions but many were duplicates. H-: Wrestling with Transhumanism Transhumanism for me is like a relationship with an obsessive and very neurotic lover. Knowing it is deeply flawed, I have tried several times to break off my engagement, but each time it manages to creep in through the back door of my mind. In How We Became Posthuman,1 I identified an undergirding assumption that makes possible such predictions as Hans Moravec’s transhumanist fantasy that we will soon be able to upload our consciousness into computers and leave our bodies behind. I argued that this scenario depends on a decontextualized and disembodied construction of information. There are, of course, many versions of transhumanism, and they do not all depend on the assumption I critiqued. How can we extract the valuable questions transhumanism confronts without accepting all the implications of transhumanist claims? As a literary scholar, I consider the locus classicus for re-framing transhumanist questions to be science fiction and speculative fiction, jointly signified by SF.

College students sign petition to ban 'White Christmas,' citing racial insensitivity (NaturalNews) "And so, my fellow Americans: ask not what your country can do for you – ask what you can do for your country." These are the words of President John F. Kennedy, spoken over 50 years ago, in his inaugural address to America. The importance of these words still rings true today, penetrating the dying soul of an entitlement-minded society that is suppressed by political correctness and suffocated by some tyrannical idea of equality. Millions of young people today have lost their way in mind and heart. College students marching for freebies, not freedom The exertion of the human spirit, the power of the human will and the ingenuity of the mind are being stifled, left behind, as millions of college students' march for handouts and freebies. Instead of asking what they can do for their country and their world, this new generation of dependents is too busy being offended and begging for things they think they are entitled to. How absurd! MRCTV.org PowerfulWords.info

Is Google Making Us Stupid? - Nicholas Carr Illustration by Guy Billout "Dave, stop. Stop, will you? Stop, Dave. Will you stop, Dave?” I can feel it, too. I think I know what’s going on. For me, as for others, the Net is becoming a universal medium, the conduit for most of the information that flows through my eyes and ears and into my mind. I’m not the only one. Bruce Friedman, who blogs regularly about the use of computers in medicine, also has described how the Internet has altered his mental habits. Anecdotes alone don’t prove much. It is clear that users are not reading online in the traditional sense; indeed there are signs that new forms of “reading” are emerging as users “power browse” horizontally through titles, contents pages and abstracts going for quick wins. Thanks to the ubiquity of text on the Internet, not to mention the popularity of text-messaging on cell phones, we may well be reading more today than we did in the 1970s or 1980s, when television was our medium of choice. Also see: Where does it end?

Technology is the Answer: What was the Question? -: UNESCO Education Education is one of UNESCO’s principal fields of activities. Since its creation in 1945, the Organization has worked to improve education worldwide believing it to be key to social and economic development. The Organization aims to help build a sustainable world with just societies that value knowledge, promote peace, celebrate diversity and defend human rights, achieved by providing Education for All (EFA). Its close links with education ministries and other partners in 193 countries place UNESCO in a key position to press for action and change. The Education Sector comprises some 400 staff members worldwide. The sector is under the authority of the Assistant Director-General for Education. Headquarters in ParisSome 150 staff members work in the Education Sector in Paris.

Steps toward Global Mind Control 1909. Five years after his release from a primitive "insane asylum," Clifford Beers, formed the U.S. National Committee for Mental Hygiene" and called for a network of mental hygiene societies throughout the world."1 1910. The Eugenics Record Office in Cold Spring Harbor in New York was funded by the Carnegie Institute, and would receive funding from the Rockefeller Foundation three years later. "The Rockefeller Foundation also will fund Nazi Dr. Ernst Rudin's eugenics research at the Kaiser Wilhelm Brain Research Institute in Berlin. "The responsibility for charting the necessary changes in human behavior rests clearly on the sciences working in that field. 1946.

OWL Coming Soon: A new look for our same great content! We're working hard this summer on a redesign of the Purdue OWL. Worry not! Our navigation menu and content will remain largely the same. If you are having trouble locating a specific resource, please visit the search page or the Site Map. The Online Writing Lab (OWL) at Purdue University houses writing resources and instructional material, and we provide these as a free service of the Writing Lab at Purdue. For more information about services for the Purdue University community, including one-to-one consultations, ESL conversation groups and workshops, please visit the Writing Lab site. Mission The Purdue University Writing Lab and Purdue Online Writing Lab (OWL) assist clients in their development as writers—no matter what their skill level—with on-campus consultations, online participation, and community engagement.

The destruction of the indigenous peoples of Europe is not an accident! | Knights Templar International Illegal Muslim refugee trafficking now creating chaos at the Greece-Macedonia border, and the constant flood of boats arriving from Libya, reveal a network that uses structured routes that seem unstoppable as they generate money for the mafia, corrupt politicians and the terrorist organisations involved like ISIS. Meanwhile, much of the migration flood through Libya is of Africans, all pouring in to a Western Europe whose population has already been dramatically transformed by six decades of mass Third World immigration and the relentless promotion of mixed marriages by the mainstream broadcasters and advertising agencies. This scenario seems to fit perfectly with a now not-so-secret plan of the New World Order known as the Coudenhove-Kalergi Plan for the most anti-human and anti-Christian elite schemes in history: The ‘painless’ but systematic genocide of the native peoples of Europe. This book is very hard to get a hold of today. Double attack