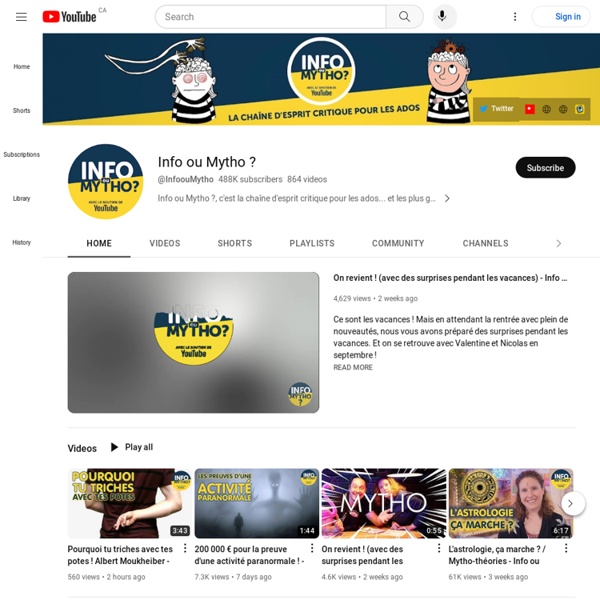 Top 10 french resources ideas and inspiration I LOVE using centres with my students! My students love them, and will choose many of the centres to play during indoor recess instead of lego and other toys. It rained this week and one of my boys chose to build with magnets on cookie trays! Setting clear routines is the most important part. Take the time to teach the games to your students so that they understand how to play properly. French words and nuances that don't exist in English - Linguistics - Eupedia English has the largest vocabulary of any language in the world (7 times more words than French, for example). English is so rich that well-educated people typically know less than 10% of all words in the language. Yet, despite having more synonyms, nuances and unique terms than other languages, it still happens occasionally that words exist in some other languages that do not have an exact translation in English, or at least not contained in a single word. This page gives examples of French words that cannot be translated easily in English or don't have a unique word keeping the same meaning. Since there are many varieties of English and countless regional and ethnic varieties, only standard (international) English was taken into account here, although translations sometimes exist in some variants of English or in slang.

6 Digital Tools for Differentiated Instruction As educators, we are always looking for ways to address the numerous academic needs of our students within the classroom. There are students who need more help, students who need to be challenged more, and those students somewhere in the middle. Technology can help both assess what students need as well as challenge them to grow. So keep reading to discover six digital tools you can add to your repertoire to help differentiate instruction within your classroom, in addition to Schoology of course. 1. Badaboom

(900) LEARN FRENCH WITH VINCENT #frenchwithvincent #learnfrench #frenchwithvincent #frenchlessonsFRENCH4ME.NET # THE BEST PLACE TO LEARN FRENCHDiscover my premium platform with 100 000's of videos, exercises, pdfs, audio files, apps, e-books to learn French: The platform is updated regularly, so be sure to visit it from time to time to benefit from the latest courses and products! AUDIO PLATFORMDownload the audio tracks and start learning French right away! SKYPE LESSONSSkype lessons just for you: CORPORATE THOUGHTS OR QUESTIONSIf you have any questions, don't hesitate to contact me:

300+ Would You Rather Questions For Teens — WYRQ Are you in need for fun and interesting would you rather questions for teens? Would You Rather Questions are a great way of quizzing one another, either for fun or as a conversation starter, and it’s a favorite for teenagers. It’s quite easy to play too – it’s simply choosing between two options, would you rather do this or do that. Tips and Tricks: Some Essential Basic Tools any 21st Century Teacher should Know About. Do you know how to download a video from youtube or convert a PDF or a website into an editable Word document? Do you know where to find free images and videos to use in your projects or how to record audio and create a QR code to share with your students and colleagues? Did you know that long URLs can be easily shortened so that they can be shared more easily? If you don’t, then this post might be for you!

Understanding French Pronouns First, let’s see how to pick the right French pronoun. What’s a Pronoun? A pronoun is a small word which replaces a noun. Angry, Mean Autistics Invading Autism Groups, Upsetting Parents Editor’s note: Heather is neurodivergent but not autistic; however, she is a fierce ally to autistics and a part of The Aspergian team. I’ve just read a third recently-released article written by parents of autistic children feeling hurt and saddened by what they were either “victims” of or how they were viewed on social media. The articles are written by well-meaning parents expressing something that happened in their life, where they are simply ranting or asking for advice regarding their autistic child. Instead of getting the anticipated support, some Autistic adults jump on their post, accusing them of being bad parents, doing something wrong, or simply appearing nasty.

What happened the night DJ Hancock died Here are some of the details of the two drinking and driving incidents involving Walter Carter which were read out in court Monday. About 1 a.m., Jan. 30, police officers investigating a report of a single-vehicle accident on Municipal Road 55 near Fielding Road, found a Sierra pickup truck about 15 metres in the ditch. Carter was behind the wheel with the engine running.

World map - interactive map of the world World Time Clock & Map World Map X en Interactive world map with countries and states 19 French Tv Channels You Can Watch Online From Anywhere This article contains affiliate links. This means French Together may earn a commission for purchases made through these links. Read affiliate disclosure. Watching French TV is one of the best ways to learn vocabulary and improve your understanding of the French language and culture. The only problem is that finding French TV channels you can watch online can be challenging, most of all if you don’t live in France. Parole for man behind deadly 2009 Hanmer crash The drunk driver who killed three teenagers in 2009 will be freed from prison in May, said the Parole Board of Canada. Nicolas Piovesan is serving a seven-year sentence after being convicted on three counts of causing death by criminal negligence. On June 21, 2009, Piovesan hit and killed Jazmine Houle, Caitlin Jelley and Steven Phillipe. Piovesan, who had been drinking at a bar, fled the scene and only stopped after crashing into a house. Piovesan serves one-third of his sentence in the community, said Cindy Golemiec, regional communications officer with the Parole Board of Canada Ontario. The Parole Board imposed a number of release conditions on Piovesan.

World: Large Countries The game World: Large Countries is available in the following languages: Seterra is an entertaining and educational geography game that lets you explore the world and learn about its countries, capitals, flags, oceans, lakes and more! You can access the Seterra online quiz site using your computer, phone, or tablet running the latest version of most web browsers, including Safari, Firefox, Chrome, and Internet Explorer.