How the Oil Industry Conquered Medicine, Finance and Agriculture 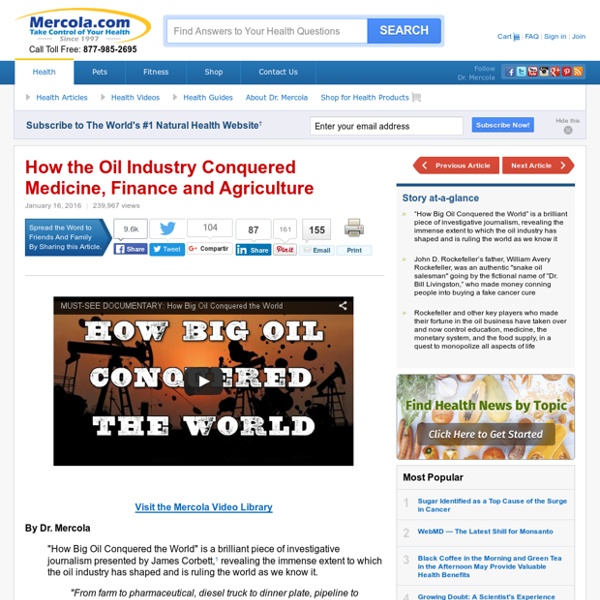 By Dr. Mercola "How Big Oil Conquered the World" is a brilliant piece of investigative journalism presented by James Corbett,1 revealing the immense extent to which the oil industry has shaped and is ruling the world as we know it. "From farm to pharmaceutical, diesel truck to dinner plate, pipeline to plastic product, it is impossible to think of an area of our modern-day lives that is not affected by the petrochemical industry. Corbett carefully details the sordid back story of today's "oiligarchy." Big Oil — An Industry Founded on Treachery and Deceit As noted by Corbett, certain details of the Big Oil story are well known. "When he wasn't running away from them or disappearing for years at a time, [William Avery Rockefeller] would teach his children the tricks of his treacherous trade. The Birth of the Oil Industry The Standard Oil Monopoly After a series of partnerships and mergers over a seven-year period, John D. By the time he was 40, John D. The Continued Squashing of Competition Related:  storia • Economia

Are You Aware Of Big Pharma’s Impressive Records? Catherine J. Frompovich, GuestWaking Times Everyone probably is familiar with the world population growth clock. Such a clock would not tick off Big Pharma’s earnings or profits, though. How much reality has to sink into human consciousness about the actuality of Big Pharma’s “medico-economics” harms—all done in the name of allopathic medicine championed by its super-duper trade unions like the American Medical Association? Consider just a few of the stunning (‘collateral damage?’) However, what are not included are all the HRSA vaccine damage claims that have been paid by Vaccine Court Masters to vaccine-damaged vaccinees or their parents in the case of deaths. Are you ready for the data and also the fact that Big Pharma is NOT liable for vaccine damages caused? This represents cumulative payouts for fiscal years 1989 to 2015 for the following categories:[1] A grand total of vaccine-damage-related expenses of close to 3.2 BILLION DOLLARS! How about a few other questions? Reference:

Is The ‘Saudi’ Royal Family Jewish? The Saudi Dynasty: Where Do They Come From and Who Is their Real Ancestor? by Muhammad Salaam Part IExtracted From Saudhouse.com, Research and Presentation of:Mohammad Sakher, who was ordered, killed by the Saudi Regime for the following findings: 1. 2. 3. The following facts will blot out all the allegations of the Saudi Family and will refute all the false statements made by those hypocrites who sold their conscience to this family by falsifying and interpolating the real history of the Saudi Family; I mean the Journalists and historians who, for a financial temporal reward, have inserted and attached the genealogy of this family to our Great Prophet Muhammad (PBUH) alleging that the Saudis are viceroys of our Almighty Allah on the Earth. The Saudi Family members know perfectly well the Muslims all over the world have already known their real Jewish Origin. “O Mankind! Who is the Real Ancestor of the Clan of Saud? So that (concealed) Jew reached Najd with the caravan. — End —

Dow Fails to Appear in Court for the Third Time over Toxic Disaster By Christina Sarich | Natural Society Leaders of 5 organizations representing survivors of the Dow Chemical (Union Carbide) disaster in Bhopal, India condemned the US government for protecting Dow from ongoing criminal proceedings in the Bhopal District court. Dow Chemical failed to appear in court for the third time recently to account for exposing half a million people to the deadly gas,methyl isocyanate. [1] Related Article: Enormity of Billowing Methane Plume in California ‘Cannot Be Overstated’ The December 2nd, 1984 incident involved a Union Carbide plant in Bhopal, India, a subsidiary of Dow, which began leaking 27 tons of the deadly gas. Representatives of the survivors of the Bhopal incident said the US Department of Justice decided not to serve the notices against Dow Chemical, stating that they could not be held liable for the Union Carbide disaster. Related Article: Near-Total Meltdown of Fukushima Reactor 2 Confirmed On behalf of the Bhopal Group for Information & Action, Mr.

How Corporations Killed Medicine Along the path toward the creation of a global capitalist system, some of the most significant steps were taken by the English enclosure movement. Between the 15th to 19th centuries, the rich and the powerful fenced off commonly held land and transformed it into private property. Land switched from a source of subsistence to a source of profit, and small farmers were relegated to wage laborers. In Das Kapital, Marx described the process by coining the term land-grabbing. To British historian E.P. More recently, a similar enclosure movement has taken place. Many people curse the for-profit medicine industry. It’s time now to reclaim this commons, and reestablish medicines as a public good. Medicines as a Public Good Most of us define public goods broadly. Non-rivalrous means that any one person can benefit from a good without reducing others’ opportunity to benefit as well. Non-excludable means what it sounds like: A person cannot be prevented from consuming the good in question.

20,000 billion dollars for banks, 1 billion for millions of Africans suffering from capitalist famine - Diary of a Walking Butterfly : Diary of a Walking Butterfly Posted by Liam O'Ceallaigh on Tuesday, November 29, 2011 · Leave a Comment For a bank “crisis”, the capitalists can raise 5, 10, 20 trillion dollars. For war they can always raise the same. Famine, like the so-called “housing crisis”, isn’t about a lack of food. From Al Jazeera: “Tens of thousands of Somalis have died and the UN warns that 750,000 others are at risk of dying before the end of the year”. “Famine is declared when acute malnutrition rates amongst children exceed 30 per cent and more than two people in 10,000 die per day”. “Children have borne the brunt of the disaster across the affected region, with an estimated 2.34 million suffering from malnutrition”. “Out of that, more than 566,000 children are severely malnourished and at risk of death”. Further Reading on capitalism’s absurd and perverse logic: “Financial Times: ‘Demolitions would boost housing market’“, by Liam O’Ceallaigh

The Complete History of Monsanto, “The World’s Most Evil Corporation” – REALfarmacy.com by E Hanzai Of all the mega-corps running amok, Monsanto has consistently outperformed its rivals, earning the crown as “most evil corporation on Earth!” Not content to simply rest upon its throne of destruction, it remains focused on newer, more scientifically innovative ways to harm the planet and its people. 1901: The company is founded by John Francis Queeny, a member of the Knights of Malta, a thirty year pharmaceutical veteran married to Olga Mendez Monsanto, for which Monsanto Chemical Works is named. Even then, the government knew saccharin was poisonous and sued to stop its manufacture but lost in court, thus opening the Monsanto Pandora’s Box to begin poisoning the world through the soft drink. 1920s: Monsanto expands into industrial chemicals and drugs, becoming the world’s largest maker of aspirin, acetylsalicyclic acid, (toxic of course). Monsanto’s Disneyfied vision of the future: A later internal memo released in a 2002 trial admitted Monsanto partners with I.G. Why? Notes

How an Army of Pharma Lobbyists in Washington Have Locked in One of the Biggest Corporate Ripoff Schemes in America Photo Credit: Shutterstock.com After an 18-month investigation into the high cost of Gilead's hepatitis C drug Sovaldi—initially listed at $84,000 for a course of treatment or $1,000 per pill—the Senate Finance Committee said the prices did not reflect the cost of research and development and that Gilead cared about "revenue" not "affordability and accessibility." That sounds like an understatement. Sovaldi and the related pill Harvoni cost Medicare and Medicaid more than $5 billion in 2014, charged senators. But Gilead is far from the only drug company camping out on our tax dollars. Taxpayer dollars are also churned by drug companies in military health programs. Drug companies have devised elaborate schemes for drug sales to states. In Texas, a Medicaid "decision tree" called the Texas Medical Algorithm Project was instituted that mandates doctors prescribe the newest and most expensive psychiatric drugs first.

15 Ways Being Jewish Is Meaningful | David Harris Surveys reveal a disturbingly large number of American Jews who feel disconnected from their Jewish identity. How painfully sad! In response, and with the High Holy Days just around the corner, let me share what being Jewish means to me. It means championing what is arguably the single most revolutionary concept in the annals of human civilization--monotheism--introduced to the world by the Jews, and its corollary, the inherent belief that we are all created in the image of God (in Hebrew, B'tzelem Elohim). Strikingly, Jews have never been satisfied with things as they are. And finally, as Nobel laureate Elie Wiesel once said, it means not necessarily seeking to make the world more Jewish, but rather more human. There's a story of an elderly woman in New York who asks her travel agent to book her on a trip to a remote part of Asia.

Don’t Believe Drug Studies: Most Are Funded By Big Pharma (and the Numbers Are Growing!) By Christina Sarich | Natural Society New research shows a 43% increase in clinical trials funded by drug companies during 2006-2014. Can you say “conflict of interest?” Concerns have been expressed over the past few years about the independence of clinical trials, due to the funding of some trials by corporations with vested interests. New data from Johns Hopkins University suggests that this is now the norm rather than the exception. The clinical trials that allow a drug to go to market are most often funded by the pharmaceutical industry. The U.S. Related Article: How Pharma Lobbyists Have Locked in One of the Biggest Corporate Ripoffs Ever The problem is that – with millions and sometimes billions of dollars at stake – there’s no requirement for these tests to be done by a third party. Clinical trials funded directly by the U.S. The number of NIH-funded trials fell by 24% from 2006 to 2014, from 1,376 trials to 1,048 trials. Source: DigitalJournal About Christina Sarich: