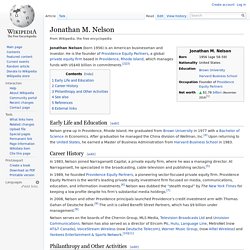 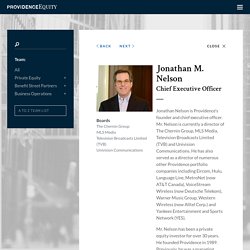 Formed in October 2010, GTS is the largest independent wireless tower company in Brazil, owning and operating over 6,000 towers throughout the country (pro forma for pending acquisitions). Prior to co-founding GTS, Mr. Eisenstein was chairman and chief executive officer of Optasite Holding Company, Inc. Mr. Eisenstein took over Optasite at the end of 2003 and transformed the company from a struggling wireless services provider into the nation’s second largest privately held wireless tower company, with nearly 600 strategically located towers in the United States, Puerto Rico and the U.S. 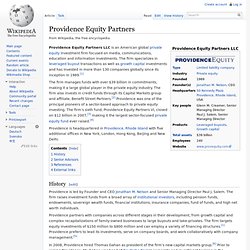 The firm specializes in leveraged buyout transactions as well as growth capital investments and has invested in more than 130 companies globally since its inception in 1989.[1] The firm manages funds with over $39 billion in commitments, making it a large global player in the private equity industry. The firm also invests in credit funds through its Capital Markets group and affiliate, Benefit Street Partners.[2] Providence was one of the principal pioneers of a sector-based approach to private equity investing. The firm’s sixth fund, Providence Equity Partners VI, closed on $12 billion in 2007,[3] making it the largest sector-focused private equity fund ever raised.[4] Blackboard Inc. 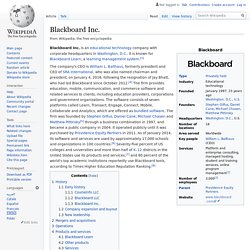 It is known for Blackboard Learn, a learning management system.[3] The company's CEO is William L. Open data: Unlocking innovation and performance with liquid information. Open data—machine-readable information, particularly government data, that’s made available to others—has generated a great deal of excitement around the world for its potential to empower citizens, change how government works, and improve the delivery of public services. 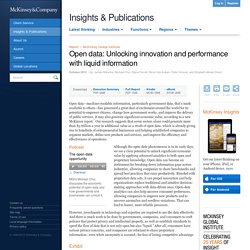 It may also generate significant economic value, according to a new McKinsey report. Our research suggests that seven sectors alone could generate more than $3 trillion a year in additional value as a result of open data, which is already giving rise to hundreds of entrepreneurial businesses and helping established companies to segment markets, define new products and services, and improve the efficiency and effectiveness of operations. 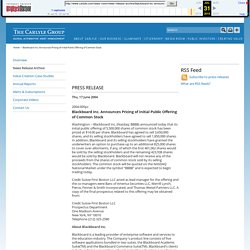 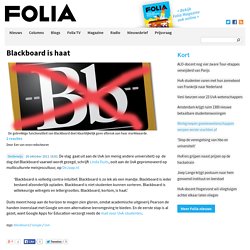 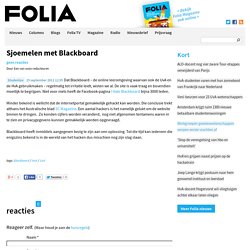 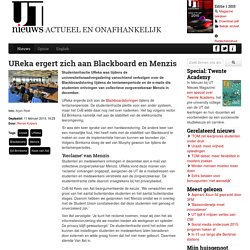 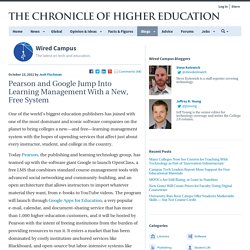 Today Pearson, the publishing and learning technology group, has teamed up with the software giant Google to launch OpenClass, a free LMS that combines standard course-management tools with advanced social networking and community-building, and an open architecture that allows instructors to import whatever material they want, from e-books to YouTube videos. The program will launch through Google Apps for Education, a very popular e-mail, calendar, and document-sharing service that has more than 1,000 higher-education customers, and it will be hosted by Pearson with the intent of freeing institutions from the burden of providing resources to run it.

Mr. Google to offer free ‘Blackboard’ Layoffs and reorganization at Blackboard. Bill Flook, who covers the DC technology scene for Business Journals, just interviewed Blackboard CEO Jay Bhatt about last week’s layoff. The full article can be found here. From a quick read, it looks like Blackboard is executing on two key priorities: Trimming the fat caused by years of acquisitions and redundant operations; andCompleting the acquisitions by centralizing core functions, particularly under new management.

From the article: Blackboard Inc. carried out a round of layoffs last week as part of a broader reorganization by CEO Jay Bhatt, the latest in a string of actions aimed at revitalizing the 16-year-old ed-tech behemoth.Bhatt, in an interview Tuesday evening, confirmed the job cuts, which he described as “a very small action we took to take some costs out of the business, primarily on things that don’t allow us to get where we need to go.” The reorganization is, in many ways, the culmination of what Bhatt has been talking about for the past few months.

Google+ Comments. Blackboard Brain Drain: One third of executive team leaves in past 3 months -e-Literate. In August 2013 Michael described Ray Henderson’s departure from an operational role at Blackboard. As of the end of 2014, Ray is no longer on the board of directors at Blackboard either. He is focusing on his board activity (including In The Telling, our partner for e-Literate TV) and helping with other ed tech companies. While Ray’s departure from the board did not come as a surprise to me, I have been noting the surprising number of other high-level departures from Blackboard recently. VOX: Blackboard. Frits Vaandrager is hoogleraar en onderwijsdirecteur bij Informatica. Will Big Data Compromise Student Privacy? The recent debate over the NSA’s surveillance policies shows just how much Americans care about privacy—perhaps on an unprecedented scale. “This is the power of an informed public,” Edward Snowden wrote of Congress’s decision this month to limit the agency’s data-collecting power.

“With each court victory, with every change in the law, we demonstrate facts are more convincing than fear.” But when it comes to the future of education in the United States, what if Americans’ privacy concerns are hindering the constructive use of data, from customized student learning to better teaching performance? That’s the tension behind a growing body of education research by private companies, academics, and nonprofits alike.

Protecting student data in a digital world. Across industries, data and advanced analytics are being used to personalize products and services, generate more impact at lower cost, and improve the user experience. Education is another field that stands to benefit from this trend: there is much evidence that data-fueled learning tools can dramatically improve student outcomes. The effective use of student data in K–12 schools—in fact, in most of the education system—is nascent, however. Schools, and in particular public schools, have limited budgets and may find it difficult to prioritize investment in data-driven tools and technologies. School systems are enormously complex, which can make it challenging to implement new programs.

And the use of student data raises questions about issues such as privacy, the possibility that personal information could be accessed by or sold to unauthorized third parties, and, more broadly, the ways in which data will be collected and used both inside and outside the school system. Thomas Gahan - Deutsche Bank --> Providence Equity Partners. Why I’m buying Blackboard.