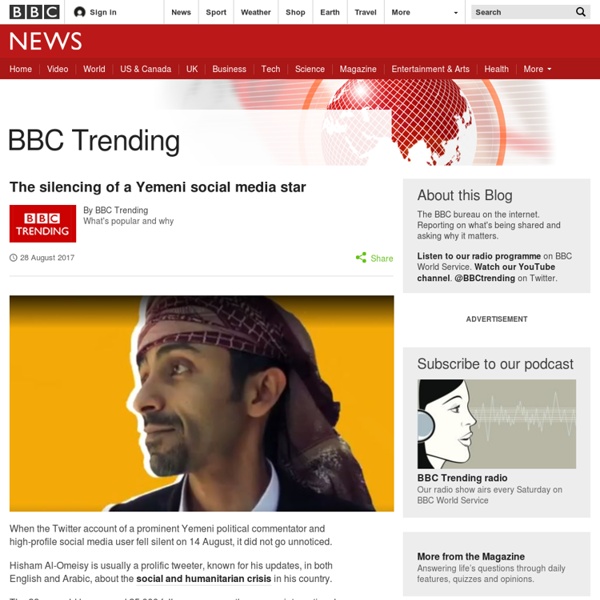 When the Twitter account of a prominent Yemeni political commentator and high-profile social media user fell silent on 14 August, it did not go unnoticed. Hisham Al-Omeisy is usually a prolific tweeter, known for his updates, in both English and Arabic, about the social and humanitarian crisis in his country. The 38-year-old has around 25,000 followers, among them many international media outlets, journalists and humanitarian workers who turn to him for insights about what's happening within Yemen. So when his account suddenly went quiet, those who have come to rely on him for valuable information, quickly knew something was wrong.

10 Unbelievably Insane UFO Conspiracy Theories Weird Stuff Thanks to never-ending reports of encounters and sightings, UFOs are easily one of the most recognized and well-known icons of modern pop culture. In fact, the fascination has even spawned whole religions with UFOs and aliens as the centerpiece. Of course, we also mustn’t forget the different UFO conspiracy theories being continuously peddled by people who either really want to know the truth or are just plain wacko. In any case, it’s certain that these conspiracy theories will never go out of style, especially when most of them are just downright insane.

Trending Today Upload The best of YouTube every day YouTube Spotlight Loading... Working... Trending on Twitter 9 Seasons of The X-Files Mythology Explained in One Infographic Kieran Dickson Friday, 1 April - 5:7PM Star Wars Rebels has successfully become must-watch TV for fans of the galaxy far far away, and after this week's huge season 2 finale, we suspect the show's fan-base might just have grown even larger. Given the questions raised by Twilight of the Apprentice, it's no surprise that we're all desperate to learn more of whats in store for Star Wars Rebels in the show's third season. This week, on the Rebels aftershow 'Rebels Recon', Dave Filoni dropped a major hint that something huge is going to happen when the show returns later this year. Something big is going to happen that I think people really, really want, and I know that I've wanted it for a while.

I’ll Always Give You A Reason To Stay I’m not one to beg. I’m not going to sit on my knees, and tearfully look up at you with a wish written on my mouth. I’m not going to pathetically shout to you, if you decide to leave me. I’m not going to sink down into a bed of despair. Reddit The Veggie Cuban Sandwich We were out to dinner a couple of nights ago with some serious foodie friends – one of them being an accomplish food writer of many years, and the conversation made its way around to movies we had recently seen. One film in particular had us all gabbing, Chef. Have you seen this gem of a movie starring, written, directed and produced by Jon Favreau? You should. There were so many things that I loved about this movie; the characters and the incredible casting of the perfect actors for the parts, the killer Latin music, the unbelievable riffs of food preparation that had my mouth-watering and my stomach growling throughout the movie, but most of all, it was the simple passion for food, life and love that spoke to me.

History of Slot Machines 1891 and against the backdrop of the town of Brooklyn, in the recently-booming east coast New York City, Sittman and Pitt had just developed the gaming machine that in the years to come would be considered THE precursor to the modern slot machine. Based on poker, possibly to cash-in on the popularity of the game, the machine contained five drums carrying a total of fifty cards and like it’s namesake in the table-sitting world, it proved to be a popular hit with gambling players everywhere but especially in it’s home city of New York. At this time you would be hard-pressed to find a bar in the city that didn't have at least one of these machines standing at the side of the bar waiting for potential players to insert a nickel and press the lever in the hope of a good poker hand.

5 episodes that highlight the biting backstage humor of The Larry Sanders Show · 5 To Watch In 5 To Watch, five writers from The A.V. Club look at the latest streaming TV arrivals, each making the case for a favored episode. The reasons for their picks might differ, but they can all agree that each episode is a must-watch. In this installment: The Larry Sanders Show, which will be available for streaming on HBO Go on Friday, September 23. HBO’s sublime Larry Sanders Show managed to look both forward and backward at television history. Not only did it feature a conceited man at the center of his own show-within-a-show, like Jack Benny and Dick Van Dyke’s series had years before, but it also preceded the sharp, caustic backstage looks at showbiz subsequently seen in 30 Rock and Sports Night.

Applying A.I. To Retail Brands And Beyond Artificial Intelligence (AI) is both buzzword and buzz-worthy, depending on what you’re reading or who’s talking about it. Sure, there certainly is a lot of hype, but at the National Retail Federation Big Show (NRF), a few brands are giving us a taste of what’s possible when they apply all of that ‘big data’ and actually analyze it to improve their operations and engage with customers. The most magical and memorable shopping experiences are when the retailer has exactly what the customer wants. 5 Life Tips for College Graduates Grads, congrats! You did it! You are about to enter the adult world and let's face it, that's a little scary. But don't fear! Here are some skills and suggestions to help this transition into your professional life be as smooth as possible! Continue to expand your social skills

5 Ways to Improve Your Credit Score Trying to improve your credit score? Those three little numbers can be crucial if you want to rent an apartment, buy a car, or open low rate, high benefit credit cards. Here are five ways you can boost your credit score and own your future! 1) Leave accounts open Welcome Home! 5 Reasons Why You Should Buy Your Home Instead of Renting It You Can Make Your Space Your Own Nothing is worse than being stuck in a home where all of the walls are white and you can’t even make your space your own. Owning a home will allow you to paint the walls how’d you like and make any changes you want to make your living space more customized and comfortable. You Can’t Get Kicked Out By a Landlord Renters can get an eviction notice unexpectedly if the owner decides to sell the home or rent it to others at any point of time. Owning your home could relieve this unnecessary stress and conflict that can come out of getting kicked out of your living space.