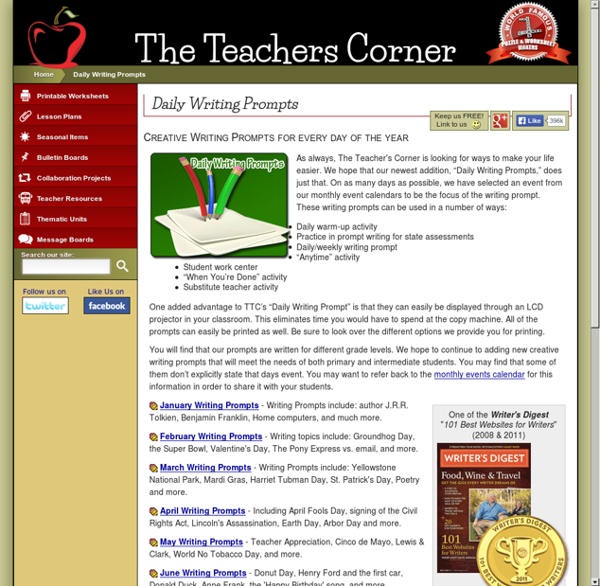 As always, The Teacher's Corner is looking for ways to make your life easier. We hope that our newest addition, “Daily Writing Prompts,” does just that. On as many days as possible, we have selected an event from our monthly event calendars to be the focus of the writing prompt. These writing prompts can be used in a number of ways: Daily warm-up activity Practice in prompt writing for state assessments Daily/weekly writing prompt “Anytime” activity Student work center “When You’re Done” activity Substitute teacher activity One added advantage to TTC’s “Daily Writing Prompt” is that they can easily be displayed through an LCD projector in your classroom. You will find that our prompts are written for different grade levels. One of the Writer's Digest "101 Best Websites for Writers" (2008 & 2011) January Writing Prompts - Writing Prompts include: author J.R.R. March Writing Prompts - Writing Prompts include: Yellowstone National Park, Mardi Gras, Harriet Tubman Day, St. Related:  essentials of Education Continued

Writing Prompt Ideas to Inspire Young Writers {photo credit} This post is written by contributing writer Becky @ This Reading Mama. Writing can be one of those dreaded subjects. Sometimes, kids simply don’t know what to write about. Let’s just keep it real- sometimes we as their teacher don’t know what to have our kids write either! Real-Life Experiences Thank You Notes or Cards One way to prompt some writing is through real life experiences. Practical Day-to-Day Writing Maybe you can inspire your child to write by integrating authentic prompts into your day. Field Trips Did you just take a field trip? Younger kids can write their favorite part of the field trip down or simply write predictable sentences based on this prompt, “On our trip, I saw…” Based on pictures that you took while you were there, kids can also retell the field trip by sequencing the photos and writing about them. Write About Yourself Encourage kids to keep a Writer’s Notebook or even a daily journal of the things that happen to them. Great Literature

Online Language Arts Games Highlights Free Gift with Newsletter Sign-Up Do you receive our free newsletters? We send out seasonal content tie-ins, topical resources, and daily activities. And now when you sign up for any TeacherVision newsletter, we'll send you a packet of our most popular back-to-school essentials as a free gift! Read for the Record Take part in the world's largest shared reading experience with Jumpstart's Read for the Record this October 22! This year's book is Not Norman: A Goldfish Story. October Calendar of Events October is full of events that you can incorporate into your standard curriculum. Bullying Prevention Month October is Bullying Prevention Month, and it's a crucial topic for teachers and administrators to address. Halloween Happy Halloween!

Texas, Textbooks and Truth It seems at least once a month we read a news story about dubious education practices that spawn national outrage. This week’s news featured pages from a geography textbook that identified Africans forced into the horrific transatlantic slave trade as “workers” and “immigrants.” Here’s the story: 15-year-old Coby Burren took a picture of a fishy page from the textbook and sent it to his mother, a former teacher and current Ph.D. student, with a text message: “[W]e was real hard workers, wasn’t we ☹.” Before talking about all that is wrong here, I’d like to point out two aspects of this story that should hearten us all. First, it shows that speaking up sometimes can effect change. Second, Dean-Burren raised her son right. As for the problems here, they’re complex and deep, and they go far beyond the Texas suburb where Coby attends school, and beyond McGraw-Hill, the company that publishes the textbook. We included the recorded use of that word in the film.

Spotlight Table of Contents to this Poetry Unit Poetry Lessons for Teachers and Students I have tried to preview all links; however, time constraints and constantly changing links create some uncertainly about all links being absolutely safe links at all times. Please understand links outside our address do not represent our work, but are here to provide other poetry resources. Proceed to these links with caution and guidance. Hint: Good introduction to poetry - Show the CD, "The New Kid on the Block." OBJECTIVES for this unit: .............. Here are some links that will help (several links are for locating images and sounds) introduce your poetry unit: Poetry is truth in its Sunday clothes. Joseph Roux (1834-86), French priest, writer. Introductory to Poetry *Please notice that many of these poetry lessons includes a lesson for students and a teacher lesson plan for help in delivery of the lesson. Lesson 1........Figurative Language for the student Lesson 1 .......Lesson Plan for Figurative Language

Rewriting History—for the Better Illustration by Julie Flett It was pure coincidence that, during a recent trip to Northern California’s wine country, Kevin Gover, director of the Smithsonian’s National Museum of the American Indian in Washington, D.C., stumbled upon a perfect illustration of what’s wrong with history instruction in the United States. He and his wife were visiting an original Spanish mission at the same time as a group of fourth-graders. Gover watched as teachers and chaperones dressed as Franciscan friars led the children, who were dressed as Indians, through a series of quaint activities. “They were making candles. They were spinning wool, weaving baskets. This kind of Eurocentric approach to American history will come as no surprise to many educators who work from scripted U.S. history curricula. To address this, Gover and his team at the Smithsonian are gearing up to unveil a program called Native Knowledge 360, a nationwide curriculum initiative to make comprehensive Indian education a priority.

Tone and Style ( Read ) | User Generated Content Lesson Objectives Distinguish between informal style and academic style Learn how to write clearly Diagnose and fix vague sentences Distinguish between denotative and connotative meanings Learn how to avoid gender bias Identify characters and actions in sentences Apply the old-before-new and short-to-long principles of style Learn when to use and not to use minimalizations and passive voice in sentences Learn how to write coherent and concise sentences Learn how to emphasize sentence elements Definition of Tone and Style Tone refers to the type of language writers use to address their audience. Example 1: The city should just start paying for our rides to school so we can use the bus money for other stuff. Example 2: If the city gave students free access to public transportation, riding to school for free would not only save students and their parents money, but it would also promote the use of public transportation. Review Questions Think about things you normally write everyday.

“What’s ‘Colorism’?” Illustration by Alex Eben Meyer When I began teaching in Boston, I was struck by how often students of color referred to each other as “light-skinned” or “dark-skinned.” Almost daily, I witnessed high school students identify, categorize and stereotype their peers based on skin tone. Any response to this question is complicated due to the deep legacy and influence of skin-color preference in the United States and in other parts of the world. It makes sense that teenagers—who are working out their own identities on a day-to-day basis—also engage in color-conscious discourse. Research Shows … Skin-color bias affects perceptions and interactions in ways that are at once subtle and profound. A more modern example of research on colorism comes from Eddie Fergus, an assistant professor of education at New York University who conducted a study on Latino high school males. Fergus’ findings are not unique. Why Care About Colorism? What relevance do these studies hold for educators?

Inside Stanford Business School’s Spiraling Sex Scandal The prestigious school’s sexual-harassment policies proved to be no match for a litigious love triangle involving the dean and two married professors. When, in November 2013, Stanford University held one of its seminars on sexual harassment, Professor James A. Phills, of the Graduate School of Business, heard a lawyer from the general counsel’s office describe a romance gone sour at a primate-research center. A scientist (“Ed”) kicked his former paramour (“Melissa”) off a project involving monkeys, then slashed her bonus 80 percent, all because she refused to bleep him back at the hotel. Such a problem, the lawyer declared, could never arise at Stanford. “If the person who is involved is a dean, you should go straight to the provost,” the lawyer replied. “That would probably pose a real problem,” the lawyer replied. He might, Phills replied. “And your expectation would be that the provost or the general counsel, if something like this were to happen, Stanford would be concerned?”

Is “Donors Choose” Right for Our Schools? By Eric Braun On September 11, 2015, the major television networks—ABC, CBS, NBC, and FOX—simultaneously broadcast Think It Up, a celebrity-loaded telethon to raise money for public education in the United States. Put on by the Entertainment Industry Foundation (EIF), the show featured more celebrities than an issue of People magazine, including Justin Bieber, Stephen Colbert, Gwyneth Paltrow, Seth Meyers, Kristen Bell, Scarlett Johansson, Kacey Musgraves, Taylor Lautner, Joe Manganiello, Matthew McConaughey, Jeremy Renner, and Jessica Williams. A lavish, entertaining show. But some educators say there is a problem here. It’s like putting a Band-Aid on a mortal wound. It feels good to give to a worthy cause, and it’s gratifying to scroll through the Donors Choose site and see all the interesting projects being funded. What do you think? Eric Braun is a Minneapolis-based writer and editor. We welcome your comments and suggestions. © 2015 by Free Spirit Publishing. Like this: