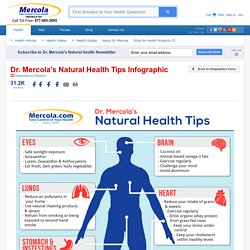 If you're on a mobile device, tap on the code, drag the markers to highlight the entire text, and select "Copy. " Embedding this infographic will generate a link to our page. You are free to remove the link or edit the link text, but not to replace it with another one. Download High-Res Version Stay Healthy from Head to Toe with These Natural Health Tips The state of health of many people today is quite alarming. Since the mid-1990s, the number of Americans suffering from at least three chronic illnesses almost doubled. But here's something that's even more disturbing: Americans spend twice as much on health care per capita than any other country in the world, but rank last among industrialized countries in terms of quality of care. We spend more money to stay healthy, but we maintain a poor state of health.

26 Killer Infographics to Improve Your Health and Fitness. GRAPHICS: Average Daily Food Intake of Homer Simpson, Seinfeld Cast & Garfield. Massive Health. Arrested Development Opening. Little Ways To Change Your Life. Health Habits Around the World. 20 Healthy Habits You Should Adopt In Your Twenties. 25+ apps that the TED staff swears make their everyday lives easier. At our small, fast-moving nonprofit company, everyone does a couple of jobs — and productivity apps help us manage roles that shift between coding, writing/designing and running a full-scale conference twice a year. 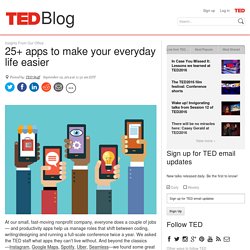 We asked the TED staff what apps they can’t live without. And beyond the classics—Instagram, Google Maps, Spotify, Uber, Seamless—we found some great apps that might help you too. (A star denotes that the app is free, or at least has a free version.) For random life stuff… Dark SkyA weather app with startling accuracy, its interface tells you things like: “Light rain starting in 22 minutes.” *SunriseLike your Google Calendar with key improvements, several staffers swear by this app. *KeyMeCommunications manager Samantha Kelly was excited to download this app, as she recently got locked out of her apartment.

*Think DirtyThis app tells you exactly what’s in the personal care product you’re about to buy. *Camera360This app has more than 200 photo filters and 10 modes. How to Manage Your Time: 9 Steps. 20 Quick Tips For Better Time Management. How to Keep to a Daily Schedule: 7 Steps. The Daily Routines of Great Writers. Infographic: See The Daily Routines Of The World's Most Famous Creative People. We tend to imagine writers, painters, and composers burning the midnight oil, skipping meals, and working feverishly when true inspiration strikes. 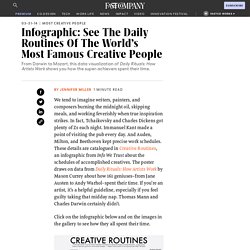 In fact, Tchaikovsky and Charles Dickens got plenty of Zs each night. Immanuel Kant made a point of visiting the pub every day. Astrology Marina: Most Succesful Professions for the Zodiac Signs. Now that I study sociology and I focus more on "mass psychology" rather than the individual and I am learning about statistics, this is something I really have been getting into. 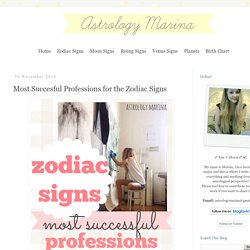 Maybe looking at overall patterns can tell us more about the signs than an individual? I heard that, statistically, one of the most accurate things related to the astrological chart is the predicted profession. 5 Famous People Who Secretly Had Awesome Second Careers. Adolf Hitler was nearly an artist before he got rejected from art school. 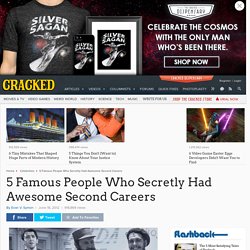 Dolph Lundgren has a master's degree in chemical engineering but chose to go into direct-to-DVD action movies instead. And they're not the only ones; somewhere, there's an alternate reality completely different from ours, where the following people went with their first career choice (for better or worse). #5. Fidel Castro: Major League Baseball Pitcher. Sitcom Cribs: Could Your Favorite TV Character Actually Afford Their Place? The cost of living has been a big issue in national politics lately; the minimum wage debate rages on. 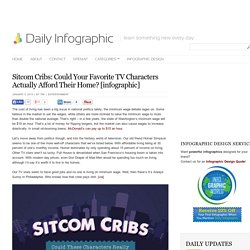 Some believe in the market to set the wages, while others are more inclined to raise the minimum wage to more than double the national average. The Best Visualizations Of How People Spend Their Days. There have been several visualizations created over the past couple of years showing how people spend their days. 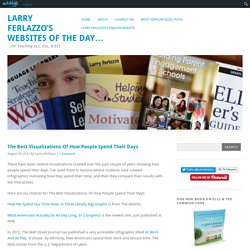 I’ve used them in lessons where students have created infographics indicating how they spend their time, and then they compare their results with the interactives. Here are my choices for The Best Visualizations Of How People Spend Their Days: How We Spend Our Time Now, in Three (Really Big) Graphs is from The Atlantic. What Americans Actually Do All Day Long, In 2 Graphics is the newest one, just published at NPR. In 2012, The Wall Street Journal has published a very accessible infographic titled At Work And At Play.