20 Incredible TED Talks You Should Show Your High School Students 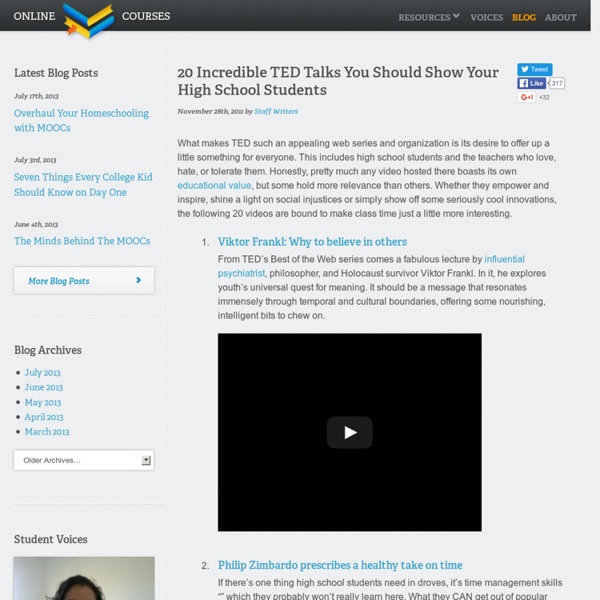 What makes TED such an appealing web series and organization is its desire to offer up a little something for everyone. This includes high school students and the teachers who love, hate, or tolerate them. Honestly, pretty much any video hosted there boasts its own educational value, but some hold more relevance than others. Whether they empower and inspire, shine a light on social injustices or simply show off some seriously cool innovations, the following 20 videos are bound to make class time just a little more interesting. Viktor Frankl: Why to believe in othersFrom TED’s Best of the Web series comes a fabulous lecture by influential psychiatrist, philosopher, and Holocaust survivor Viktor Frankl. In it, he explores youth’s universal quest for meaning.

Why Google doesn’t care about hiring top college graduates - Quartz On Dec. 4, Italians went to the polls to decide on a reform referendum that would redefine the power of local governments and reduce the power of the senate. With a high turnout, my countryman rejected the reform. In the press, the voters’ decision was described as an Italian Brexit, and a triumph of populism.

How to Keep Kids Engaged in Class Have you ever plunked yourself down in a staff meeting where some of your colleagues were, for lack of a better phrase, not paying attention? Grading homework? Having private conversations? Sixteen Things Calvin and Hobbes Said Better Than Anyone Else To paraphrase E.B. White, the perfect sentence is one from which nothing can be added or removed. Every word plays its part. In my more giddy moments I think that a simple comic strip featuring Calvin, a preternaturally bright six year-old, and Hobbes, his imaginary tiger friend, features some of the most lucid sentences committed to print. And when I sober up, I usually think exactly the same.

5 Teaching Practices I'm Kicking to the Curb Special Announcement: This post has been named as a finalist for the 2015 SmartBrief Educators’ Choice Content Awards! If you’d like to see it win, click here to vote—the posts are listed by the authors’ names, so look for Jennifer Gonzalez in the list. Thank you!! So many of us teach the way we were taught. We may not even realize we’re doing it. And that means certain practices get passed down year after year without question, methods that are such a normal part of the way we do school, we perpetuate them without realizing there are better alternatives. The Case for Banning Laptops in the Classroom A colleague of mine in the department of computer science at Dartmouth recently sent an e-mail to all of us on the faculty. The subject line read: “Ban computers in the classroom?” The note that followed was one sentence long: “I finally saw the light today and propose we ban the use of laptops in class.” While the sentiment in my colleague’s e-mail was familiar, the source was surprising: it came from someone teaching a programming class, where computers are absolutely integral to learning and teaching. Surprise turned to something approaching shock when, in successive e-mails, I saw that his opinion was shared by many others in the department.

10 Mind-Blowing Experiments That Will Change The Way You Understand Yourself Why do we do the things we do? Despite our best attempts to “know thyself,” the truth is that we often know astonishingly little about our own minds, and even less about the way others think. As Charles Dickens once put it, “A wonderful fact to reflect upon, that every human creature is constituted to be that profound secret and mystery to every other.” Psychologists have long sought insights into how we perceive the world and what motivates our behavior, and they’ve made enormous strides in lifting that veil of mystery.

60 of the world's happiest facts 1. A group of flamingos is called a flamboyance. 2. If you fake laugh long enough you’ll start to really laugh, really, really hard. 17 right (and wrong) ways to use technology The world of education is one of the many things we focus on here at the Daily Genius. We like to encourage you to learn in new ways – through viral content, interesting videos, and visuals that we think are worth your time. If you’re interested in education OR technology, then this is a great graphic you should check out. It’s via Bill Ferriter who shared this with the world on Twitter quite awhile ago. Why do we think it’s awesome?

100 Intro Open Courses on Everything You've Ever Wanted to Learn Posted on Wednesday May 12, 2010 by Staff Writers While the classes you take through an online college are a great resource, you can augment your learning by taking some time to see what entirely free courses are out there offered by universities. Taking these courses can be a great way to get a foundation of knowledge or expand on what you already know. Here are 100 open courses that are designed for beginners, so you can start your educational journey on the right foot. 10 Mind-Blowing Theories That Will Change Your Perception of the World Reality is not as obvious and simple as we like to think. Some of the things that we accept as true at face value are notoriously wrong. Scientists and philosophers have made every effort to change our common perceptions of it. The 10 examples below will show you what I mean. 1. Great glaciation.

Sleep and the Teenage Brain by Maria Popova How a seemingly simple change can have a profound effect on everything from academic performance to bullying. “Sleep is the greatest creative aphrodisiac,” Debbie Millman asserted in her advice on breaking through your creative block. “Sleep deprivation will profoundly affect your creativity, your productivity, and your decision-making,” Arianna Huffington cautioned graduating seniors in her Smith College commencement address on redefining success. And yet, as German chronobiologist Till Roenneberg argued in his fantastic Internal Time: Chronotypes, Social Jet Lag, and Why You’re So Tired — one of the best science books of 2012, and undoubtedly among the best you’ll ever read — teenagers have already endured years of institutionally inflicted sleep deprivation by the time they get to college: there is a tragic disconnect between teens’ circadian givens and our social expectations of them, encapsulated in what is known as the disco hypothesis. Donating = Loving

Creative Homework Assignments Can Motivate Students Teachers can make homework more meaningful by giving students interesting and motivating assignments. It’s easy to get into a routine in which you give students the same type of homework each week. There’s usually a spelling packet and math worksheets involved. While these types of homework assignments serve a purpose, there are ways to incorporate additional activities to make learning at home a little more meaningful and interesting. Create Assignments That Relate to Real Life The 10 Most Important Business Skills in 2020 (Infographic) In the near future, smart machines and systems will automate many jobs that exist today, changing the nature of skills that are in high demand. As social technologies play a more important role in value creation, skills such as social intelligence and new media literacy, among others, will become increasingly important for workers. The infographic below from Top Ten Online Colleges shows which capabilities will be most valued by 2020: