CA 125 Blood Test, Results, Levels, Normal Range, and Marker. Trepanning. Trepanning, also known as trepanation, trephination, trephining or making a burr hole (the verb trepan derives via Old French and therefrom via Medieval Latin from the Greek noun of relevant meaning trypanon, literally "(a) borer, (an) auger")[1][2] is a surgical intervention in which a hole is drilled or scraped into the human skull, exposing the dura mater to treat health problems related to intracranial diseases. 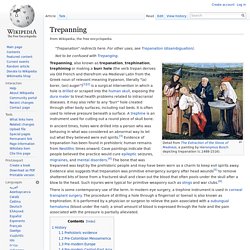 It may also refer to any "burr" hole created through other body surfaces, including nail beds. It is often used to relieve pressure beneath a surface. A trephine is an instrument used for cutting out a round piece of skull bone. There is some contemporary use of the term. In modern eye surgery, a trephine instrument is used in corneal transplant surgery. History[edit] Trepanated skull, Neolithic. Dr. 18th-century French illustration of trepanation. Prehistoric evidence[edit] Pre-Colombian Mesoamerica[edit] Pre-modern Europe[edit] Pre-modern Central-East Asia[edit] See also[edit] New CT Reveals Inner Structures of Body in Exquisite Detail.

Computed tomography (CT) is an excellent noninvasive technique to investigate bones and soft tissue structures in a patient. 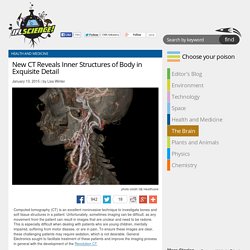 Unfortunately, sometimes imaging can be difficult, as any movement from the patient can result in images that are unclear and need to be redone. This is especially difficult when dealing with patients who are young children, mentally impaired, suffering from motor disease, or are in pain. To ensure these images are clear, these challenging patients may require sedation, which is not desirable. General Electronics sought to facilitate treatment of these patients and improve the imaging process in general with the development of the Revolution CT. CTs use a series of X-ray scans to create ‘slices’ of the patient’s body, which are then stacked to make a complete 3D representation. Additionally, Revolution CT is able to complete the scan using up to 82% less ionizing radiation than traditional CT scanners, which is ideal in use with pediatric and oncology patients. Biopsy. A biopsy is a medical procedure that involves taking a small sample of tissue so that it can be examined under a microscope. 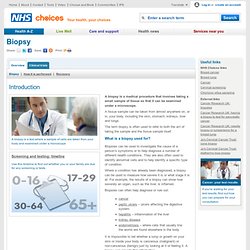 A tissue sample can be taken from almost anywhere on, or in, your body, including the skin, stomach, kidneys, liver and lungs. The term biopsy is often used to refer to both the act of taking the sample and the tissue sample itself. What is a biopsy used for? Biopsies can be used to investigate the cause of a person’s symptoms or to help diagnose a number of different health conditions. They are also often used to identify abnormal cells and to help identify a specific type of condition. Where a condition has already been diagnosed, a biopsy can be used to measure how severe it is or what stage it is at. Biopsies can often help diagnose or rule out: MRI scan. Magnetic resonance imaging (MRI) is a type of scan that uses strong magnetic fields and radio waves to produce detailed images of the inside of the body. 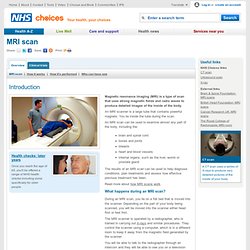 An MRI scanner is a large tube that contains powerful magnets. You lie inside the tube during the scan. An MRI scan can be used to examine almost any part of the body, including the: brain and spinal cord bones and joints breasts heart and blood vessels internal organs, such as the liver, womb or prostate gland The results of an MRI scan can be used to help diagnose conditions, plan treatments and assess how effective previous treatment has been.

Read more about how MRI scans work. CT scan - Introduction. A computerised tomography (CT) scan uses X-rays and a computer to create detailed images of the inside of the body. 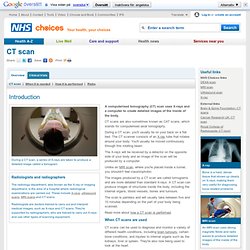 CT scans are also sometimes known as CAT scans, which stands for computerised axial tomography. During a CT scan, you'll usually lie on your back on a flat bed. The CT scanner consists of an X-ray tube that rotates around your body. You'll usually be moved continuously through this rotating beam. The X-rays will be received by a detector on the opposite side of your body and an image of the scan will be produced by a computer. Unlike an MRI scan, where you're placed inside a tunnel, you shouldn't feel claustrophobic. The images produced by a CT scan are called tomograms and are more detailed than standard X-rays. The scan is painless and will usually take between five and 10 minutes depending on the part of your body being scanned. Lumbar puncture. A lumbar puncture is a medical procedure where a needle is inserted into the lower part of the spine to look for evidence of conditions affecting the brain, spinal cord or other parts of the nervous system. 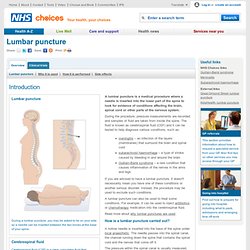 During the procedure, pressure measurements are recorded and samples of fluid are taken from inside the spine. The fluid is known as cerebrospinal fluid (CSF) and it can be tested to help diagnose various conditions, such as: meningitis – an infection of the layers (membranes) that surround the brain and spinal cord subarachnoid haemorrhage – a type of stroke caused by bleeding in and around the brain Guillain-Barré syndrome – a rare condition that causes inflammation of the nerves in the arms and legs If you are advised to have a lumbar puncture, it doesn't necessarily mean you have one of these conditions or another serious disorder. Instead, the procedure may be used to exclude such conditions.