Thyroid Pharmacist. Many cases of thyroid problems are missed because most doctors don't perform a comprehensive test panel. 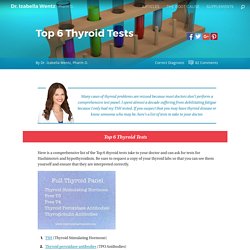 I spent almost a decade suffering from debilitating fatigue because I only had my TSH tested. If you suspect that you may have thyroid disease or know someone who may be, here's a list of tests to take to your doctor. Here is a comprehensive list of the Top 6 thyroid tests take to your doctor and can ask for tests for Hashimoto’s and hypothyroidism. Be sure to request a copy of your thyroid labs so that you can see them yourself and ensure that they are interpreted correctly. Glossary TSH - This is a pituitary hormone that responds to low/high amounts of circulating thyroid hormone.

Thyroid peroxidase antibodies (TPO Antibodies) and Thyroglobulin Antibodies (TG Antibodies) - Most people with Hashimoto's will have an elevation of one or both of these antibodies. Free T3 & Free T4 - These tests measure the levels of active thyroid hormone circulating in the body. Hashimoto's And TPO Antibodies TPOAb is the most common antibody present. Thyroid ultrasounds as well as blood tests are used to diagnose Hashimoto’s. 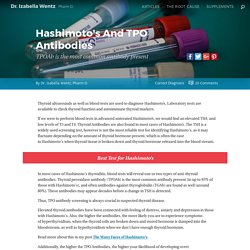 Laboratory tests are available to check thyroid function and autoimmune thyroid markers. If we were to perform blood tests in advanced untreated Hashimoto’s, we would find an elevated TSH, and low levels of T3 and T4. Recommended Labwork. TSH - Why It's Useless. Is Hashimoto's Hypothyroidism Genetic? And What To Do About Genes. Many people have asked me if Hashimoto’s is genetic, and if so, is there anything we can do about our genes? 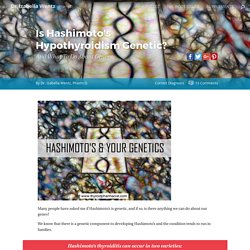 We know that there is a genetic component to developing Hashimoto’s and the condition tends to run in families. an organ wasting form (atrophic) associated with HLA-DR3 gene inheritance enlarged thyroid (goiterous form) through HLA-DR5 inheritance These genes are common in the Caucasian population. Relatives of those with Hashimoto’s are at risk. So, if you have been diagnosed with Hashimoto’s, there’s a chance that a loved one like your mom, sister, daughter or aunt may be at risk for Hashimoto’s as well. Think about women in your life that struggle with weight gain, anxiety, fatigue, depression, infertility, or hair loss. While Hashimoto’s is much more common in women, 7 women are affected for every one man; men too, can be affected. Symptoms are similar in men, but some men may also experience unique symptoms like low sex drive, poor facial hair growth and loss of muscle tone.

Hashimoto's and the MTHFR Gene - Hashimotos Healing. You’re Not Crazy, It’s Your Genes Hashimoto’s is a complicated condition. 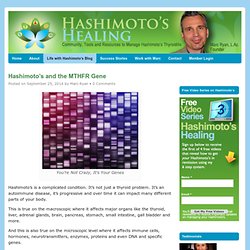 It’s not just a thyroid problem. It’s an autoimmune disease, it’s progressive and over time it can impact many different parts of your body. This is true on the macroscopic where it affects major organs like the thyroid, liver, adrenal glands, brain, pancreas, stomach, small intestine, gall bladder and more. And this is also true on the microscopic level where it affects immune cells, hormones, neurotransmitters, enzymes, proteins and even DNA and specific genes. And with many of these influences, it is not a one way street. One thing affects another and you sometimes have the creation of vicious cycles and problems and its hard to tell where they started. The MotherFR Gene. What To Do If Your TSH Is "Normal" And You Are Anything But! Plus a Printable Letter for Your Doctor!

Most conventional physicians use the TSH test to determine if one has a thyroid disorder and to dose thyroid medications. 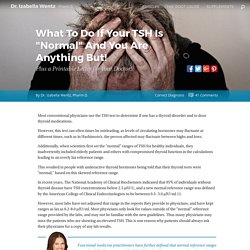 However, this test can often times be misleading, as levels of circulating hormones may fluctuate at different times, such as in Hashimoto’s, the person affected may fluctuate between highs and lows. Additionally, when scientists first set the “normal” ranges of TSH for healthy individuals, they inadvertently included elderly patients and others with compromised thyroid function in the calculations leading to an overly lax reference range.

This resulted in people with underactive thyroid hormones being told that their thyroid tests were “normal,” based on this skewed reference range. However, most labs have not adjusted that range in the reports they provide to physicians, and have kept ranges as lax as 0.2-8.0 μIU/ml. Most physicians only look for values outside of the “normal” reference range provided by the labs, and may not be familiar with the new guidelines. TSH test: MedlinePlus Medical Encyclopedia. Thyroid Pharmacist.