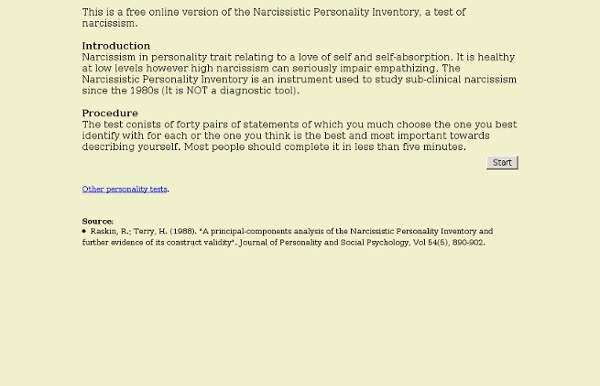 This is a interactive version of the Narcissistic Personality Inventory. Introduction Narcissism in personality trait generally conceived of as excessive self love. In Greek mythology Narcissus was a man who fell in love with his reflection in a pool of water. The NPI was developed by Raskin and Hall (1979) for the measurement of narcissism as a personality trait in social psychological research. It is based on the definition of narcissistic personality disorder found in the DSM-III, but is not a diagnostic tool for NPD and instead measures subclinical or normal expressions of narcissism. Procedure The test consists of forty pairs of statements. Participation Your use of this assessment must be strictly for educational purposes.

Signs You’re A Narcissist The views expressed are those of the author and are not necessarily those of Scientific American. If I see one more listicle about introversion, I’m going to cry. It started out with the fairly reasonable “31 Unmistakable Signs That You’re An Introvert.” But then this happened: 22 Signs Your Dog’s An Introvert "He often wears headphones with no music playing, in the hopes no one will try and talk to him." You’d think that’d be enough for a lifetime of listicles. Another common misconception perpetuated by these listicles is that introversion and sensory processing sensitivity are the same thing. “While extroverts tend to get bored easily when they don’t have enough to do, introverts have the opposite problem — they get easily distracted and overwhelmed in environments with an excess of stimulation.” Actually, sensory processing sensitivity is not the same thing as introversion. But when I saw this listicle, I just about flipped my lid: 7 Signs Kanye West Is Secretly An Introvert Really? Done?

Psycology: Know Thyself I’ve decided to start a series called 100 Things You Should Know about People. As in: 100 things you should know if you are going to design an effective and persuasive website, web application or software application. Or maybe just 100 things that everyone should know about humans! The order that I’ll present these 100 things is going to be pretty random. Dr. <div class="slide-intro-bottom"><a href="

Narcissistic Personality Disorder Case Study - ... Mon, April 14, 2008 - 5:47 PM My traineeship is at an inpatient drug rehabilitation program for adults. In family therapy group I observe my client, H as he interacts with his parents. The threesome acts out that scene they know so well… that is, their rigid family roles. A second generation Iranian, H is thirty-years-old and strikingly handsome. He stands about 6’4” and has a commanding presence. I think of a Macy’s Day Parade balloon when I look at him. For two hours tonight, he sits in between his parents with his arms spread out and draped behind their backs. His parents leave and I make a comment that his body language was interesting to me. It’s as if I’ve let the air out of the balloon. Upon my return to the office three days later, I learn that H has been demoted in the program because he acted out with terrible verbal rage against another resident and threatened to leave the program to go get Oxycontin and “check-out of this bull shit.” His mother is gorgeous and flashy as well.

The Narcissist’s Victims The Narcissist’s Victims Frequently Asked Question # 38 The narcissist’s nearest and dearest end up being victimized by his instability, misleading cues, and counter-dependence (his hatred of authority figures, for instance). Read more and buy the book(s) Click HERE to Watch the Video By: Dr. Malignant Self Love - Buy the Book - Click HERE!!! Relationships with Abusive Narcissists - Buy the e-Books - Click HERE!!! READ THIS: Scroll down to review a complete list of the articles - Click on the blue-coloured text! Question: You describe the narcissist as a cunning, immoral extortionist. Answer: Sooner, or later, everyone around the narcissist is bound to become his victim. Different people are adversely affected by different aspects of the narcissist's life and psychological make-up. There are three categories of victims: Victims of the narcissist's instability The narcissist leads an unpredictable, vicissitudinal, precarious, often dangerous life. Victims of the narcissist's misleading signals