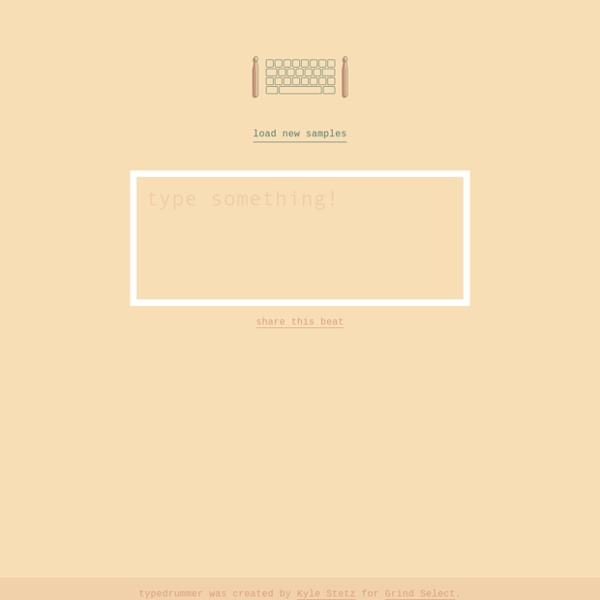 Wanted: Ninja Rockstar Code Monkey Hacker Unicorn (ed: There's two sentence pairs in here lifted directly from real JDs. See if you can find them!) We’re looking for the best of the best - but as you can already tell from the title, we have no idea what that looks like. We want someone experienced enough to implement our ridiculous ideas but paradoxically lacking the experience to realize what a raw deal we’re offering. Work long hours to implement vague ideas with no autonomy for vague promises of getting rich one day.

Online Random rhythm Motif Generator Some ways you can use these rhythm patterns. 1) You can play around with these patterns by going to the online drum sequencer and enter the pattern into the app to sample the pattern. 2) Combine both patterns to make a new single pattern. 3) Augment the Values. Take these pattern and increase the note or rest value. Augment the time value by doubling the value. beatlab - make music together let's get started making music... 1draw on the grid with your mouse to make a beatshow me2 save your track and share it with friends. show me3 out of ideas? roll the dice and start remixing. show me4 explore the beatlab community show me For more tips, tutorials vidoes, and FAQs, check out our community wiki. You can use the following keyboard shortcuts while composing a track. spacebar

The 25 Best Websites for Music Lovers A couple of weeks back, we published a pretty extensive list of great websites for literature lovers. The feature generated lots of feedback and comment from our readers, so much so that we thought we’d repeat the exercise for music. There are the obvious music sites that everyone reads — Pitchfork, Stereogum, Spin, Resident Advisor (if you’re into electronic music), etc. 'Whodunnit' awareness test: How many changes can you spot? The clip initially appears to be a scene from a cliched murder mystery, with a trench coat–wearing detective interviewing the maid, butler and lady of the house over the death of Lord Smithe, who lies sprawled on the drawing room floor. But the sketch is merely the premise for a test designed to show just how bad we are at noticing things that we're not looking for – including on the roads. After the detective names the killer the scene is replayed, this time filmed from a camera that captures all the film crew's out-of-shot manoeuvrings.

London Marathon 2014: Lubrication, bras and loo roll: marathon running tips for women 1. You will think you're Beyoncé For the first 13 miles – before you start seriously questioning whether what you're doing actually constitutes self-harm – you will feel like a rock star. People are cheering for you! They're chanting your name! Online Ear Training with Intervals, Melodies, and Jazz Chord Progressions Loading ear trainer audio . . . 100% Use this form to save the current settings (active tab, tempo, options, etc) as an "exercise" which you can return to in the future. Your Saved Exercises Caja de Ritmos Facil Includes over 400 unique drum samples, spanning electro to real drum kits. Create beats, compose drum tracks and then save the results to WAV sound files for use in other projects or software. Enjoy! Two Play Buttons?

2015 Internet Trends Kleiner Perkins partners with the brightest entrepreneurs to turn disruptive ideas into world-changing businesses. The firm has helped build and accelerate growth at pioneering companies like AppDynamics, Google, Amazon, Flexus Biosciences, Nest, Waze, Twitter, JD.com and Square. Kleiner Perkins offers entrepreneurs years of operating experience, puts them at the center of an influential network, and accelerates their companies from success to significance. For more information, visit and follow us @kpcb. we can't both be right. An annotated digest of the top "Hacker" "News" posts for the last week of March, 2017. Onedrive is slow on Linux but fast with a “Windows” user-agent (2016)March 22, 2017(comments) Microsoft continues the war against their own users. A Microsoft shows up to paste a boilerplate fauxpology, then immediately contradicts it in followup apologetics. A small phalanx of Hackernews is angry this 'bug' sat untouched for months prior to gaining social media notoriety; their whining is used to kick off several dozen pages of pointless bickering about "New Microsoft," Linux being too hard, and the proper way to inform your customers you don't give a shit about them. US Senate votes to undo FCC internet privacy rulesMarch 23, 2017(comments) The United States Senate continues the war against their own users. One Hackernews suspects some kind of massive federal conspiracy to censor comments on reddit.com.

Jazz Blog, Ear Training, Jazz Trumpet, Atlanta Jazz Play Mode controls what happens when you click play. Auto-mode, puts the player on a loop, delaying each loop for as long as desired. Check this box to immediately show the first note of the sequence as it plays.

Otomata - Online Generative Musical Sequencer 16 Jul 2011 Click on the grid below to add cells, click on cells to change their direction, and press play to listen to your music. Update: Click here to get Otomata for your iPhone / iPod / iPad! Official facebook page: