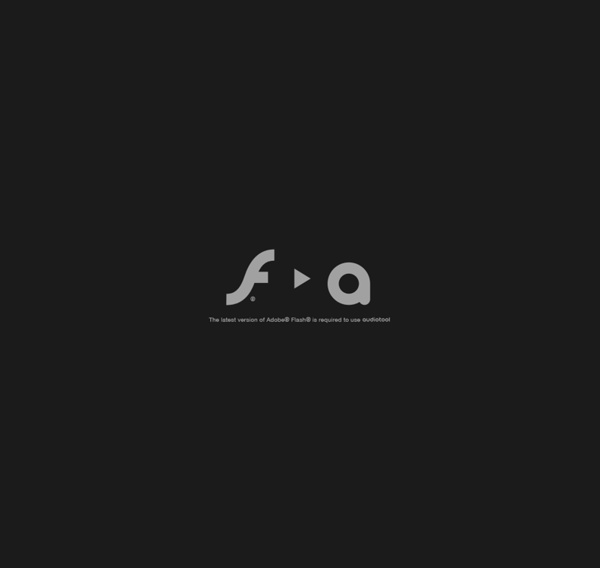 6 Apps & Websites to Get Your Ear in Shape If you followed along with us a few weeks ago, you know how much interval ear training can help you as a musician and how to get started with training itself. If you haven't read it, head on over to Boot Camp for Your Ear. This time, we're going to look at a bunch of applications and websites that will help you with regular ear training sessions. Otomata 16 Jul 2011 Click on the grid below to add cells, click on cells to change their direction, and press play to listen to your music. Update: Click here to get Otomata for your iPhone / iPod / iPad!

Shortcut When his wife grew ill in the early 1960s, Indian farmhand Dashrath Manjhi took her from their home in Gelaur to the hospital in the neighboring town of Wazirganj. Unfortunately, this meant a journey of 19 kilometers, as a hillock of solid rock lay between the two villages. When he returned to Gelaur, Manjhi resolved to improve matters. Working alone with a hammer and chisel, he spent 22 years cutting a passage through a solid mass of rock 360 feet long, 25 feet high, and 30 feet wide. When he finished in the 1980s, he had reduced the route from 19 kilometers to six and the travel time from six hours to one. When Dasrath died in 2007, the Indian state of Bihar gave him a state funeral.

The Ultimate Road Trip Playlist — 50 Best Road Trip Songs  No road trip is complete without a playlist of songs that capture the spirit of traveling on the open road. So we’ve compiled a list of the 50 best road trip songs . In order to make this be-all end-all totally definitive list that all other lists look up to, the songs had to meet the following criteria: a.) encompass the excitement and freedom of road tripping #.Tks8-kjWKhs As more and more journalists are finding, APIs are a great way to get data for your Web applications and projects. An API, or application programming interface, enables software programs to communicate with one another. (Chrys Wu wrote a helpful intro here.) To give you a better understanding of how they can help you, I’ve outlined some of the best APIs for finding content and explained how you can use open-source programming tools to glean information from them. Twitter API

Theremin - A Playable Touch Synthesizer Using Web Audio API ✖Update: 7 February 2014 Thanks to everyone for sharing! Over 100,000 people have played on the theremin in the last 3 days which is absolutely amazing. Due to a large number of requests, we've began working on a record function as well as an offline version of the app which will be available soon. Virtual Flute The Virtual Flute Well for the real flute addicts here's the virtual flute page. I will put several of my flutes on this page so you can play them and listen to them without having to buy them. Isn't that great.!!!! Top 100 Best Acoustic Songs Ever -The Greatest of All Time Here is a list of the best acoustic songs ever written. Acoustic music has come a long way over the years, so many are “oldies” and many are “newies.” We are basing this list off of historical album sales, the ever so objective factor of acoustic-ness, but mostly how easily they make us cry. They are mostly arranged in alphabetical order, by song – so make sure you check out the whole list! Feel free to give your input on suggestions, changes, discards, or songs we may have forgot about. Also, for those interested in a serious path to learning guitar, please see our trusted partner, Guitar Tricks:

Playlist - The Perfect House Party Playlist: Pre-Drunk Rock To Hip Hop The name pretty much says it all. If you have a house party, this is perfect. You start the list around 9-10ish before people get any spirits in them and the party is bustling. The Music transitions from rock and music you can talk behind quickly to more energetic classic and modern rock. After that, it transitions to dance music with a few good drunk singalongs thrown in.

Jazz Blog, Ear Training, Jazz Trumpet, Atlanta Jazz Play Mode controls what happens when you click play. Auto-mode, puts the player on a loop, delaying each loop for as long as desired. Check this box to immediately show the first note of the sequence as it plays. In Rhythm Section mode, the "first note" displayed is the key without the progression/chord type. Check this box to delay the complete results of what was just played. Set the key center to the key center of your instrument so you can play along.