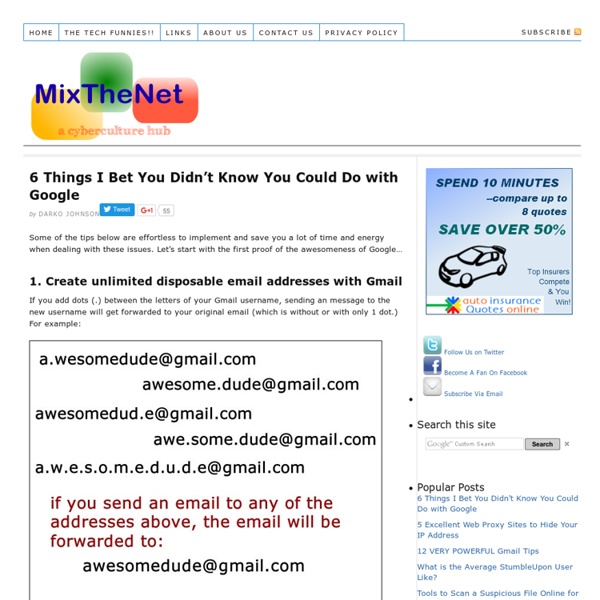 Some of the tips below are effortless to implement and save you a lot of time and energy when dealing with these issues. Let’s start with the first proof of the awesomeness of Google… 1. Create unlimited disposable email addresses with Gmail If you add dots (.) between the letters of your Gmail username, sending an message to the new username will get forwarded to your original email (which is without or with only 1 dot.) For example: It doesn’t matter how many dots you’ll add between your username, all of the emails sent will go to your original email. Gmail doesn’t recognize dots as characters within usernames, you can add or remove the dots from a Gmail address without changing the actual destination address; they’ll all go to your inbox, and only yours. homerjsimpson@gmail.com = hom.er.j.sim.ps.on@gmail.comhomerjsimpson@gmail.com = HOMERJSIMPSON@gmail.comhomerjsimpson@gmail.com = Homer.J.Simpson@gmail.com All these addresses belong to the same person. Why is this helpful? 2. Results:

How to Find Anything Online: Become an Internet Research Expert Einstein once said, “The secret to creativity is knowing how to hide your sources.” The same could be said of intelligence. What they don’t tell you is that the “smart” people of the world are, in most cases, just better at researching and learning things than everyone else. But researching is a learned skill, not something you’re born with. And while some people might be predisposed to learn things more easily than others, it’s generally not enough to make a measurable difference. 64 Things Every Geek Should Know - laptoplogic.com The term ‘geek’, once used to label a circus freak, has morphed in meaning over the years. What was once an unusual profession transferred into a word indicating social awkwardness. As time has gone on, the word has yet again morphed to indicate a new type of individual: someone who is obsessive over one (or more) particular subjects, whether it be science, photography, electronics, computers, media, or any other field. A geek is one who isn’t satisfied knowing only the surface facts, but instead has a visceral desire to learn everything possible about a particular subject.

Think Your WPA-Protected Wifi Is Secure? Think Again – Here Comes The Reaver By now, we should all be aware of the dangers of securing networks with WEP, which I demonstrated before how you could hack in 5 minutes. The advice has always been to use WPA or WPA2 to secure your network, with a long password that couldn’t be hacked by brute force. Well, it turns out there’s a significant backdoor in most routers that can be exploited – in the form of a technology called WPS. Rudolf Dreikurs Discouragement Encouragement Punishment Democratic As an alternative to punishment or nagging, a parent/teacher can have the following dialog with a misbehaving child/student: Teacher: Do you know why you misbehave (break the classroom rules, roam around the room, etc.)? Student: No. Teacher: I would like to tell you what I think."

Google Censorship - How It Works An anticensorware investigation by Seth Finkelstein Abstract: This report describes the system by which results in the Google search engine are suppressed. Google Exclusion, introduction Google is arguably the world's most popular search engine. However, contrary perhaps to a naive impression, in some cases the results of a search are affected by various government-related factors. That is, search results which may otherwise be shown, are deliberately excluded. 5 FREE Programs to make your computer (slightly) easier to use and look cool(ish) This is a neat little gizmo that sits on any side of the screen. In its original format, I found it slightly obtrusive (it covered up the tool bars). I used these solutions.

3 Hacks for Firefox That Will Double Your Internet Browsing Speed - Gnoted.com There are many people out there complaining about the Firefox RAM Memory Bug. Lets get it straight. It’s not a bug. It’s part of the cache feature. This ‘feature’ is how the pages are cached in a tabbed environment. My Collection of Funny Emails. Send funny emails to your friends! Reynolds Wrap has lock in taps to hold the roll in place The color on the bread tab indicates how fresh the bread is And those colors are in alphabetical order: b, g, r, w, y. You can divide and store ground meat in a zip loc bag. Just break off how much you need and keep the rest in the freezer for later.

100 Greatest Cooking Tips (of all time!) 1. Remember, y'all, it’s all about the prep. Take away the stress by doing the prep the night or day before. You'll look like a star.Paula Deen Paula’s Best Dishes 2. The smaller the item, the higher the baking temperature. Less Popular Google Search Tips There’s not a day that passes by without searching for information on Google. We’re pretty sure that you’re aware of some advanced Google search operators like AND, NOT, etc. but here are some lesser known tricks that you can implement when you’re searching on Google. We bet you wouldn’t know at least one of these! 1. Forget the site: operator, just use ‘at’ Some of you would have known the site: search operator.