Debate: Did Jesus Rise from the Grave?

Did Jesus Really Rise from the Dead? If the bones of Jesus were found tomorrow, would you walk away from Christianity? 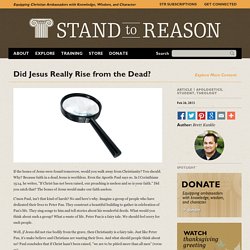 You should. Why? Because faith in a dead Jesus is worthless. Even the Apostle Paul says so. In I Corinthians 15:14, he writes, "If Christ has not been raised, our preaching is useless and so is your faith. " C'mon Paul, isn't that kind of harsh? When were the gospels written and by whom? By Matt Slick Dating the gospels is very important. 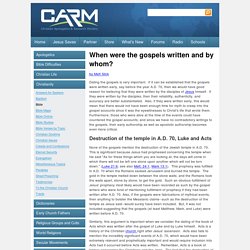 If it can be established that the gospels were written early, say before the year A.D. 70, then we would have good reason for believing that they were written by the disciples of Jesus himself. If they were written by the disciples, then their reliability, authenticity, and accuracy are better substantiated. Also, if they were written early, this would mean that there would not have been enough time for myth to creep into the gospel accounts since it was the eyewitnesses to Christ's life that wrote them. Q. Don't the resurrection accounts contradict each other? The New Testament makes the assertion that the truth of Christianity stands or falls on the resurrection of Jesus Christ. 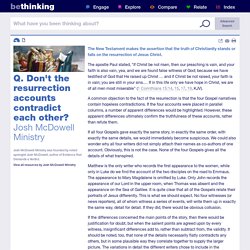 The apostle Paul stated, "If Christ be not risen, then our preaching is vain, and your faith is also vain, yea, and we are found false witness of God; because we have testified of God that He raised up Christ … and if Christ be not raised, your faith is in vain; you are still in your sins.… If in this life only we have hope in Christ, we are of all men most miserable" (1 Corinthians 15:14, 15, 17, 19, KJV). Comparison of Gospel Accounts of the Resurrection of Christ.

236 1543 256 27.9KGoogle +60 Below is a comparison chart showing all the accounts of the resurrection of Jesus and post-resurrection appearances reported in the Bible, particularly the four Gospels. 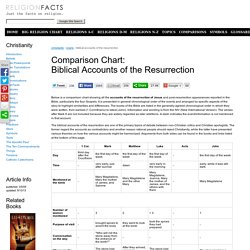 It is presented in general chronological order of the events and arranged by specific aspects of the story to highlight similarities and differences. The books of the Bible are listed in the generally-agreed chronological order in which they were written, from earliest (1 Corinthians) to latest (John). Information and wording is from the NIV (New International Version). The verses after Mark 8 are not included because they are widely regarded as later additions. Debate: "Did Jesus Really Rise From The Dead?" Debate between Michael Horner and Dan Barker. 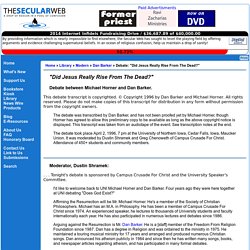 This debate transcript is copyrighted. © Copyright 1996 by Dan Barker and Michael Horner. All rights reserved. Please do not make copies of this transcript for distribution in any form without permission from the copyright owners. The debate was transcribed by Dan Barker, and has not been proofed yet by Michael Horner, though Horner has agreed to allow this preliminary copy to be available as long as the above copyright notice is displayed. Jesus’ Failed Prophecy About His Return. The fact that Christianity started as a Jewish apocalyptic movement is evidenced by the teachings of the Biblical Jesus concerning the end of days. 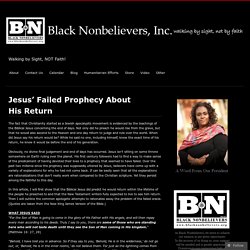 Not only did he preach he would rise from the grave, but that he would also ascend to the Heaven and one day return to judge and rule over the world. When did Jesus say his return would be? While he said no one, including himself, knew the exact time of his return, he knew it would be before the end of his generation. Obviously, no divine final judgement and end of days has occurred. Jesus isn’t sitting on some throne somewhere on Earth ruling over the planet. In this article, I will first show that the Biblical Jesus did predict he would return within the lifetime of the people he preached to and that the New Testament writers fully expected to live to see him return. WHAT JESUS SAID“For the Son of Man is going to come in the glory of His Father with His angels, and will then repay every man according to his deeds. 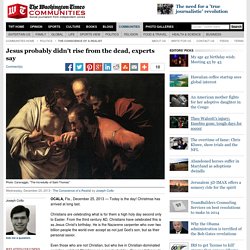 Christmas has arrived at long last. Christians are celebrating what is for them a high holy day second only to Easter. From the third century AD, Christians have celebrated this is as Jesus Christ’s birthday. He is the Nazarene carpenter who over two billion people the world over accept as not just God’s son, but as their personal savior. Even those who are not Christian, but who live in Christian-dominated societies, celebrat Christmas as a secular holiday. This is a period of hope, joy, togetherness, and renewal — not to mention lavish parties and expensive gifts. Historians have tried to track the life of Jesus in a more careful way than provided by the traditional accounts. Dr. SEE RELATED: Jesus probably didn’t teach Torah in the Temple or travel through Asia Easter is the holiest Christian celebration. It didn’t. “The Gospels are an example of that process. Dr. Christ myth theory. For discussion of Jesus in a comparative mythological and religious context, see Jesus Christ in comparative mythology, and for the body of myths associated with Christianity, see Christian mythology. 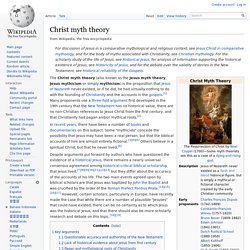 For the scholarly study of the life of Jesus, see Historical Jesus, for analysis of information supporting the historical existence of Jesus, see Historicity of Jesus, and for the debate over the validity of stories in the New Testament, see Historical reliability of the Gospels. In recent years, there have been a number of books and documentaries on this subject. Some "mythicists" concede the possibility that Jesus may have been a real person, but that the biblical accounts of him are almost entirely fictional.[3][4][5] Others believe in a spiritual Christ, but that he never lived.[6] Key arguments[edit] Questionable accuracy and authorship of the New Testament[edit] Lack of historical evidence about Jesus from first century[edit] Pagan and mythological roots of Christianity[edit]

Please Convince Me. The Resurrection is the Defining Moment It is the resurrection that separates Jesus from all other good teachers, intelligent gurus and world leaders in history! 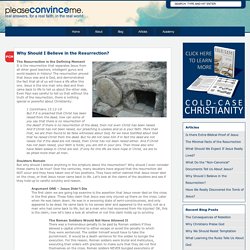 The resurrection proved that Jesus was and is God, and demonstrated the fact that all of us will have a life after this one. Jesus is the one man who died and then came back to life to tell us about the other side. Evidence for the Resurrection. By Josh McDowell For centuries many of the world's distinguished philosophers have assaulted Christianity as being irrational, superstitious and absurd. 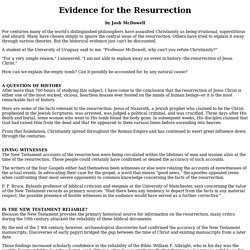 The New Testament documents, particularly the Gospels, were written by eyewitnesses or under the direction of eyewitnesses before the death of the apostles. Therefore, there were plenty of people around who could have contested the post crucifixion appearances of Christ. We must first understand that the Gospels are historical documents, and they are reliable ones.