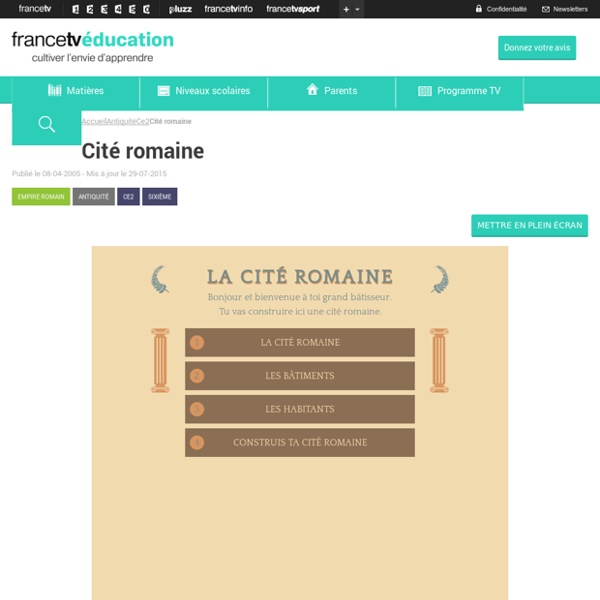 Mapping the Greatest Empires of History View the high resolution version of this infographic by clicking here. From public CCTV cameras to biometric identification systems in airports, facial recognition technology is now common in a growing number of places around the world. In its most benign form, facial recognition technology is a convenient way to unlock your smartphone. At the state level though, facial recognition is a key component of mass surveillance, and it already touches half the global population on a regular basis. Today’s visualizations from SurfShark classify 194 countries and regions based on the extent of surveillance.

Serious Games At The British Museum Serious Games exploring the British Museum's collection Great Court Space - Courtesy the British Museum The British Museum's new website for kids called Young Explorers is all about world histories and cultures. Populus Romanus 2: Brit. FREE POPULUS ROMANUS II: BRITANNIA has now arrived! A turn based strategy war game where you return to ancient Rome, this time leading Roman legions against british tribes in their conquest of the island of Britannia. Play various scenarios of the wars fought by the Roman empire in the ancient age. *** If you encounter a bug, please get in touch with us by email, so that we can fix the problem! Same thing with refunds: Just mail us

This Beautiful Mexico City Building Eats The City's Smog Plenty of green buildings cut down on pollution with design features that minimize their energy usage. A tower under construction at a Mexico City hospital, on the other hand, actually eats pollution in the air that surrounds it. The Torre de Especialidades is shielded with a facade of Prosolve370e, a new type of tile whose special shape and chemical coating can help neutralize the chemicals that compose smog: and not just a small amount of them, but the equivalent produced by 8,750 1,000 cars driving by each day. The tile is the first product by Berlin-based design firm Elegant Embellishments, whose co-founder Allison Dring explained to me via email, just exactly how a 100-meter-long tile screen can suck up serious amounts of smog. When UV light cuts through smoggy air and hits the titanium dioxide on the tiles, a chemical reaction occurs between the tiles and chemicals in the smog—mono-nitrogen oxides, or NOx.

ROMAN EMPEROR PROJECT - Daniel Voshart - Design / Cinematography #design #architecture #cinematography Prev Next ✕ Index Using the neural-net tool Artbreeder, Photoshop and historical references, I have created photoreal portraits of Roman Emperors. BEAT THE CENSOR - an illustration of different censoring attempts SCORE: 0000 | Users connected: 000 Why do some countries censor the internet? Frankly we do not know and you would need to ask the respective governments why they are doing it. Ludus Latrunculorum Checkersland is a free program that supports more than 30 kinds of checkers. A very strong artificial intelligence, good-looking interface and a lot of useful settings for playing hot-seat with another opponent or on your phone against the AI. Don't miss this game! TWILIGHT OF ROME - The Eternal City at the peak of its glory. - History in 3D Our History in 3D creative team continues to work on our main project – Rome in 3D. The recent few months have been very productive and we are close to completing the extensive 3D reconstruction of the entire center of the ancient city. This new video about ancient Rome from our History in 3D creative team shows the Eternal City at the peak of its glory. This 3D reconstruction was made with a high level of detail and accuracy, in accordance with all the latest historical researches.

Kodu Kodu is a new visual programming language made specifically for creating games. It is designed to be accessible for children and enjoyable for anyone. The programming environment runs on the Xbox, allowing rapid design iteration using only a game controller for input. Programming as a Creative Medium The core of the Kodu project is the programming user interface. Roads of Rome Free AN EXCITING SCI-FI MULTIPLAYER ONLINE SPACE STRATEGY!※※※※※※※※※※※※※※※※※※※※※※※※※※※※※※※※※※※※Earth, year 2257. For several years now Humanity is fighting with their offspring. Greatest creation in history - Safe Hardware Environment - surpassed understanding of their creators and turned into a Singularity, a computer system, which logically led the uselessness of Mankind.Humanity is fighting with the Singularity - and loses it. In addition, experiments on the creation of engines of new type only worsened the situation. In the next few years, the Sun will turn into a supernova.

Serious Games Revolutionizing Music Learning Serious Games teaching kids how to play musical instruments Via: JoyTunes – Music Serious Games For Fun and EducationJoyTunes has just released its educational Serious Game which teaches kids how to play musical instruments by playing a video game. It has been launched as a fun and educational product that introduces a brand new way for children to learn how to play an instrument. Please check out the media release below for the full story. JoyTunes Revolutionizes Music Learning Empire:Rome Rising Castle TD: The best strategy/arcade castle defense ever! Commander, our world is in great danger which we’ve never faced! Not only orcs, but also goblins, spirits, devils and other monster are trying to destroy us! Build your defense and stop them now! Mighty Warriors:You can choose wizard, paladin or barbarian as your warrior and deploy them to the battlefield.