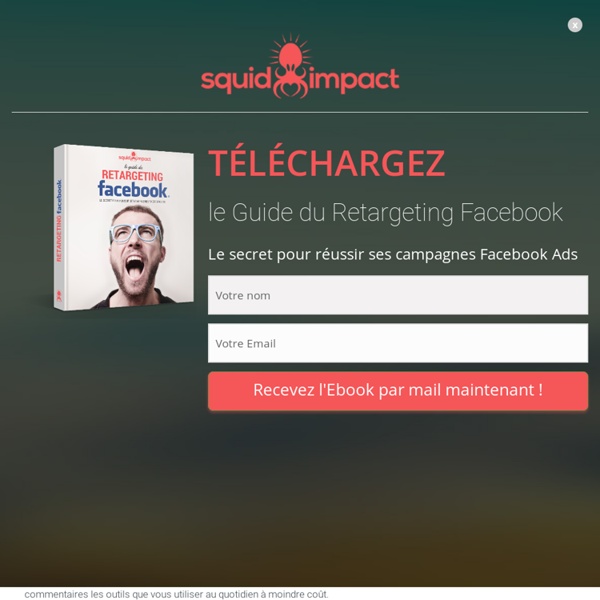 Beautiful Mathematical GIFs Will Mesmerize You Digital artist and physics PhD student Dave Whyte is dazzling our computer screens with his mesmerizing GIFs that are the perfect marriage of mathematics and art. And we can’t stop watching them. Whyte shares his brilliant, procrastination-fueling creations on an almost daily basis on his Tumblr account, Bees & Bombs. Whyte studies the physics of foam and told Colossal that his first geometric GIFs riffed on computational modules that he was exploring as an undergraduate student.

A Quick and Dirty Guide to 10 Social Media Platforms for the Newbie So you say you want to use social media, but you don’t know where to start. Here’s a quick and dirty guide to the major platforms, including a few new-ish ones: everything you need to know about how they work, how you should use them, and why you might avoid them. Keep this bookmarked should you ever need to make your social media case to the C-Suite or convince a social media virgin to adopt. The thing to keep in mind about platforms is that one isn’t inherently better than others for everyone.

mindmup Capture ideas at the speed of thought – using a mind map maker designed to help you focus on your ideas and remove all the distractions while mindmapping. Create unlimited mind maps for free, and store them in the cloud. Your mind maps are available everywhere, instantly, from any device. Five Crowdfunding Tips for Every Campaign Written by Michael Ibberson on . Posted in Campaign Advice, Promotion Trolling the web for crowdfunding tips could yield myriad results, many of which are overdone, inapplicable, or even down-right wrong. The following five crowdfunding tips are a compilation of the best — these are the fundamental crowdfunding tips to keep in mind. To avoid redundancy, we’ve kept things brief and to-the-point, so let’s get started: Narrate

Why Rational People Buy Into Conspiracy Theories Crazy as these theories are, those propagating them are not — they’re quite normal, in fact. But recent scientific research tells us this much: if you think one of the theories above is plausible, you probably feel the same way about the others, even though they contradict one another. And it’s very likely that this isn’t the only news story that makes you feel as if shadowy forces are behind major world events. “The best predictor of belief in a conspiracy theory is belief in other conspiracy theories,” says Viren Swami, a psychology professor who studies conspiracy belief at the University of Westminster in England. Psychologists say that’s because a conspiracy theory isn’t so much a response to a single event as it is an expression of an overarching worldview. As Richard Hofstadter wrote in his seminal 1965 book, “The Paranoid Style in American Politics,” conspiracy theories, especially those involving meddlesome foreigners, are a favorite pastime in this nation.

How to Master Social Marketing Quickly and Effectively The Internet is making meaningful and paradigm-shifting inroads into the way we live our lives. Did you know that in the last three years, one in six marriages were the culmination of relationships started online? “Four out of every five corporations in America are now leveraging social media to help expand their client base and build relationships with customers,” writes Sujan Patel, author of 100 Days of Growth. As a small business owner, what do you need to know to make social media work for your business?

20+ infography tools A picture is worth a thousand words – based on this, infographics would carry hundreds of thousands of words, yet if you let a reader choose between a full-length 1000-word article and an infographic that needs a few scroll-downs, they’d probably prefer absorbing information straight from the infographic. What’s not to like? Colored charts and illustrations deliver connections better than tables and figures and as users spend time looking back and forth the full infographic, they stay on the site longer. Plus, readers who like what they see are more likely to share visual guides more than articles. While not everyone can make infographics from scratch, there are tools available on the Web that will help you create your very own infographics.

Blurred Lines: songwriters suffer as Tom, Dick and Harry demand their percentages As the dust settles on the Blurred Lines fiasco, it seems the person who’s come out of this the worst is Robin Thicke. Pharrell Williams can probably earn back his part of the settlement in a matter of months, but Thicke probably will never see that sort of income again. What’s more, we learned that Williams wrote pretty much the whole thing – yet Thicke got 20% of the songwriting split on the song. “This is what happens every day in our industry,” Williams said in his deposition for the case. “You know, people are made to look like they have much more authorship in the situation than they actually do.”

Making a dream date - Dream Gates "At the Foothills of Mt Helen". B.K.Connelly, 1981 You’re separated from your sweetheart and you’d like to have some good private time together. How to Manage Instagram in 20 Minutes a Day Between managing Facebook, Twitter, LinkedIn, your blog, and your email newsletter, time is tight at work. You don’t have very much space in that schedule for Instagram. And maybe your boss isn’t even convinced yet that the world’s most popular image network can deliver business results. configure calibre with pocket Calibre, a free and open source e-book library management application supports Pocket. Using Calibre, you can sync the text content from your reading list to your Kindle or other eBook reader. To Download Calibre, click here. How to Set it Up:

Downloads AltaCast Standalone 1.0 AltaCast Winamp 1.0 AltaCast 1.0 for Foobar 0.9.x AltaCast 1.0 for Foobar 1.x If you want to stream in mp3 or aac, you have to get your own encoders as they cannot be distributed by me. You can get the latest lame mp3 here and Google Ventures On 8 Shortcuts For Better, Faster Design Research I’ve been doing design and UX research for almost 24 years. In that time, I’ve learned a lot, and I hope I’ve gotten better at it over the years. One thing is certain: I’m more productive now than when I first started. I’m not any smarter (just ask my co-workers). I’m not working more hours.