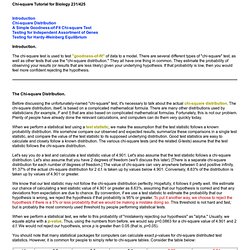 The chi-square test is used to test "goodness-of-fit" of data to a model. There are several different types of "chi-square" test, as well as other tests that use the "chi-square distribution. " They all have one thing in common. ‎www.ling.upenn.edu/~clight/chisquared.htm. Ling 300, Fall 2008 What is the Chi-square test for? 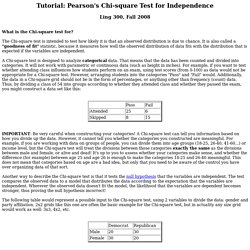 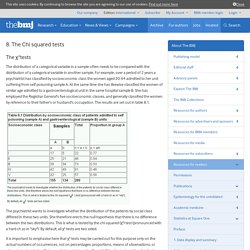 For example, over a period of 2 years a psychiatrist has classified by socioeconomic class the women aged 20-64 admitted to her unit suffering from self poisoning sample A. At the same time she has likewise classified the women of similar age admitted to a gastroenterological unit in the same hospital sample B. She has employed the Registrar General's five socioeconomic classes, and generally classified the women by reference to their father's or husband's occupation. The results are set out in table 8.1. The psychiatrist wants to investigate whether the distribution of the patients by social class differed in these two units. The χ² test is carried out in the following steps: For each observed number (0) in the table find an "expected" number (E); this procedure is discussed below. StatsTests04. Stats For Dummies. Choosing the Correct Statistical Test in SAS, Stata and SPSS. The following table shows general guidelines for choosing a statistical analysis. 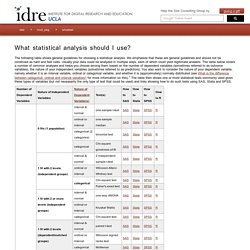 We emphasize that these are general guidelines and should not be construed as hard and fast rules. Usually your data could be analyzed in multiple ways, each of which could yield legitimate answers. The table below covers a number of common analyses and helps you choose among them based on the number of dependent variables (sometimes referred to as outcome variables), the nature of your independent variables (sometimes referred to as predictors). You also want to consider the nature of your dependent variable, namely whether it is an interval variable, ordinal or categorical variable, and whether it is (approximately) normally distributed (see What is the difference between categorical, ordinal and interval variables? 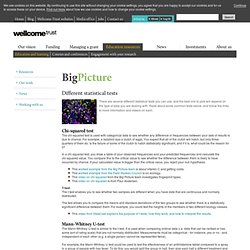