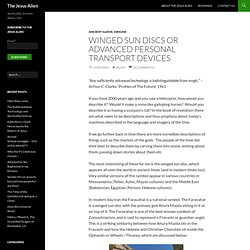 10,000-year-old rock paintings depicting aliens and UFOs found in Chhattisgarh. The Event, Bankster Suicides And Return Of Anunnaki. Reposted from: In5D.com | by James Gilliland It has been a while and it is time for an update. 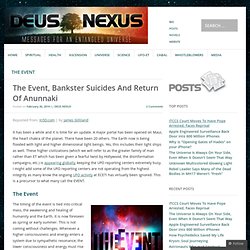 A major portal has been opened on Maui, the heart chakra of the planet. There have been 20 others. The Earth now is being flooded with light and higher dimensional light beings. Dr. Steven Greer - "Other Beings & Why They Are Here" 26 Mile Galactic Federation of Light mothership in our Solar System (Dr Steven M Greer) Are we alone in the universe? Where's the story? 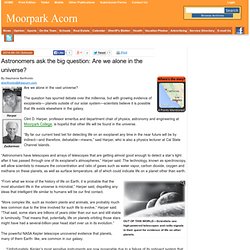 4 Points Mentioned Are we alone in the vast universe? The question has spurred debate over the millennia, but with growing evidence of exoplanets— planets outside of our solar system—scientists believe it is possible that life exists elsewhere in the galaxy. On making contact with ET. Recently, Congress and NASA provided dedicated funding for the continued search for extraterrestrial life, and particularly extraterrestrial intelligent life. 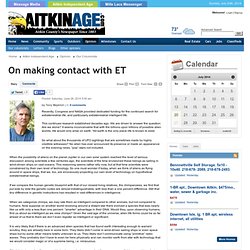 This continues research established decades ago. We are driven to answer the question: Are we alone? It seems inconceivable that with the billions upon billions of possible alien worlds, life would only arise on earth. Yet earth is the only place life is known to exist. Existence of aliens unlikely to shake humans' faith, experts say. Energizing Political Futurism and Ethics via Sci-Fi Good. By Harry J. 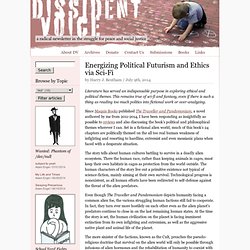 Bentham / July 9th, 2014 Literature has served an indispensable purpose in exploring ethical and political themes. This remains true of sci-fi and fantasy, even if there is such a thing as reading too much politics into fictional work or over-analyzing. Hello aliens; anybody there? Most people, from having watched so many science-fiction and alien movies, I think, are convinced that there are intelligent and advanced extra-terrestrial (ET) species out there. 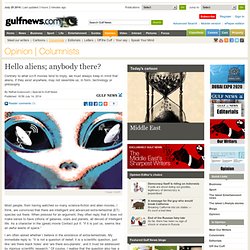 When pressed for an argument, they often reply that it does not make sense to have zillions of galaxies, stars and planets, all devoid of intelligent life. As a character in the (great) movie Contact put it: “If it is just us, seems like an awful waste of space.” I am often asked whether I believe in the existence of extra-terrestrials. Russia Orders Obama: Tell World About Aliens, Or We Will. A stunning Ministry of Foreign Affairs (MFA) report on Prime Minister Medvedev’s [photo top right] agenda at the World Economic Forum (WEF) this week states that Russia will warn President Obama that the “time has come” for the world to know the truth about aliens, and if the United States won’t participate in the announcement, the Kremlin will do so on its own. 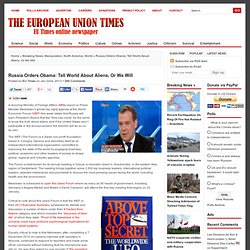 The WEF (The Forum) is a Swiss non-profit foundation, based in Cologny, Geneva and describes itself as an independent international organization committed to improving the state of the world by engaging business, political, academic and other leaders of society to shape global, regional and industry agendas. The Forum is best known for its annual meeting in Davos, a mountain resort in Graubünden, in the eastern Alps region of Switzerland. “Along with the briefcase with nuclear codes, the president of the country is given a special ‘top secret’ folder. Source. 2014 - Alien Contact. Annunaki? The Message. 2002 Message in Binary Code. 1977 NEW ALIEN SIGNAL FROM HABITABLE STAR DISCOVERED! 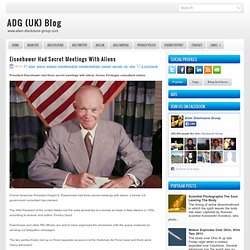 Former American President Dwight D. Eisenhower had three secret meetings with aliens, a former US government consultant has claimed. The 34th President of the United States met the extra terrestrials at a remote air base in New Mexico in 1954, according to lecturer and author Timothy Good. 10th Century Tibet. 7,000 years ago Querato, Mexico. 5,500 BC Utah. 9000-4000 B.C. Moronga, Ecuador. 17,000 - 15,000 BC France. 10,000 BC Aliens Paintings In India Discovered. Several paintings of aliens and spaceships as we know them, have been discovered in India by a team of Archaeologists. 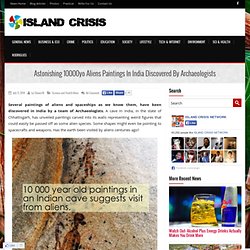 A cave in India, in the state of Chhattisgarh, has unveiled paintings carved into its walls representing weird figures that could easily be passed off as some alien species. Some shapes might even be pointing to spacecrafts and weapons. Has the earth been visited by aliens centuries ago? A common feature of prehistoric life is the array of paintings attributed to the people living during that time. The people having lived on earth centuries before left their markings on cave walls. 200,000 BC UFO appears during Uforia interview with Michael Tellinger. Scientist, explorer and author, Michael Tellinger, is well known in UFO circles as the man who uncovered amazing artifacts that appear to confirm the existence of ancient civilizations at the tip of South Africa. 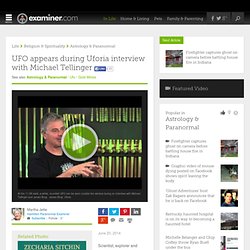 Tellinger’s archaeological discoveries revealed that a civilization existed there over 200,000 years ago. These people are said to have mined gold for an alien species called the Anunnaki and to date, thousands of old gold mines have been found. He believes they are also the ones who built the first pyramids as well as a sphinx thousands of years before the Egyptians.