The History and Principles of Weaving by Hand and by Power - Alfred Barlow. Inkle Loom Pattern Generator - The Carolingian Realm. Care and Feeding of Tapestry Bobbins 5- Using the Bobbins on a Closed Shed Loom. Preparing your yarn after spinning. Digitalcommons.unl.edu/cgi/viewcontent.cgi?article=1180&context=tsaconf. Rigid Heddle Weaving: How to Use a Pick Up Stick. You can do more than tabby (plain weave) with a rigid heddle. 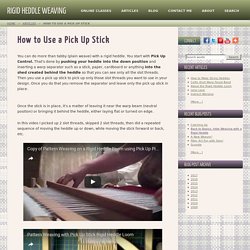 You start with Pick Up Control. That's done by pushing your heddle into the down position and inserting a warp separator such as a stick, paper, cardboard or anything into the shed created behind the heddle so that you can see only all the slot threads. Then you use a pick up stick to pick up only those slot threads you want to use in your design.

Once you do that you remove the separator and leave only the pick up stick in place. Once the stick is in place, it's a matter of leaving it near the warp beam (neutral position) or bringing it behind the heddle, either laying flat or turned on edge. Rigid Heddle Weaving: How to Double Weave. This tutorial is how to double weave to double your sett or weave a tube, create double wide cloth or weave two pieces of cloth at the same time. 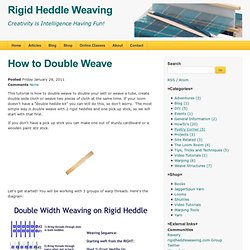 Weaving calculator. Welcome to the new and improved Weaving Calculator, by Weavolution! 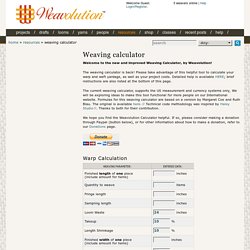 The weaving calculator is back! Please take advantage of this helpful tool to calculate your warp and weft yardage, as well as your project costs. Detailed help is available HERE; brief instructions are also listed at the bottom of this page. The current weaving calculator, supports the US measurement and currency systems only, We will be exploring ideas to make this tool functional for more people on our International website. Www.ashford.co.nz/newsite/images/stories/Solo_Warping.pdf. Inventaire des ressources ethnologiques du patrimoine immatériel. Intérêt patrimonial Lucille Chamard Toussaint témoigne de ses 60 ans de métier de tisserande. 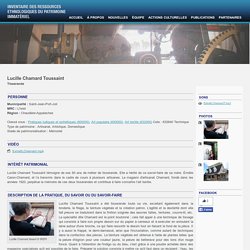 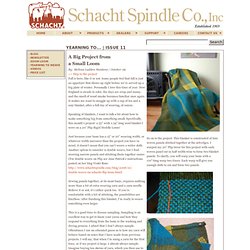 Some people feel that fall is just an appetizer that shows up right before we’re served up a big plate of winter. Personally I love this time of year. New England is awash in color, the days are crisp and sunny, and the smell of wood smoke becomes familiar once again. Speaking of blankets, I want to talk a bit about how to make something big from something small. Five ways of weaving narrow bands. Weaving a Mayan Hammock. Photo courtesy Wikipedia.com Weaving a Mayan Hammock–Video Overview Introduction The Mayan hammock is arguably the most comfortable gathered-end hammock available anywhere, and is notable for being the descendent of the original hammock discovered by Columbus on his voyages to the West Indies. 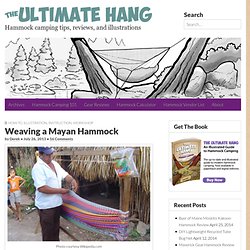 Fear Not the String Heddles (Following a Weaving Draft on a Frame Loom) Using the fringe twister. Hemstitching (Decorative) with PattyAnne. Weaving calculator. Scallop Leno Edge for scarf. Notes: Example posted for scarf borders and finish forum, the fold edge could definitely be woven with thinner thread to reduce bulk. 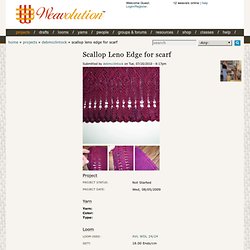 Note: I found this in one of my reference books but rushed to the loom and forgot to mark the page, I am now flipping thru books to find the reference....will update when I find it! Now...here's how I came to my source.. Weaving and Spinning Videos - PattyAnne's Place. Weaving and Spinning with PattyAnne Videos These videos represent how I weave and spin now or how I wove and spun when the videos were made. 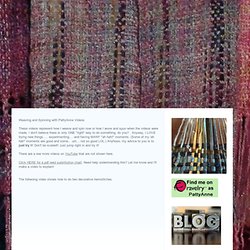 I don't believe there is only ONE "right" way to do something, do you? . Anyway, I LOVE trying new things..... experimenting.... and having MANY "ah hah! " moments. There are a rew more videos on YouTube that are not shown here. Click HERE for a pdf reed substitution chart. The follwoing video shows how to do two decorative hemstitches. What Is Fingering/Sock/Sport/DK/Worsted…Weight Yarn?

July 31st, 2011 by Christina Yarn weights go by so many different names, it can be difficult to keep track of what’s what! 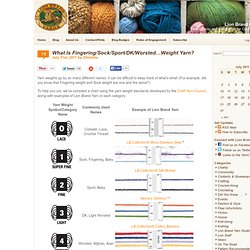 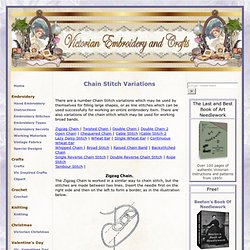 There are also variations of the chain stitch which may be used for working broad bands. Weaving a wicker basket; the most comprehensive basket tutorial on the internet- jonsbushcraft.com. File:KnittingMadonna.jpg. Puncetto Valsesiano - Valsesia. The Village Spinning & Weaving Shop: Kromski Sonata Spinning Wheel, Louet Victoria Spinning Wheel, Lendrum, Tencel, Ashford, Joy, Kiwi, Traditional, Traveller, Elizabeth, Schacht-Reeves, Matchless, Loom, Weaving Loom, Rigid Heddle, wool top, Katie Loom, K. Looms, Weaving Tools and More including tutorials! CARON Collection Features. Our tribute to men who stitch begins with a Historical Perspective on the influence of From the Renaissance to the Industrial Revolution by Rita Vainius ll over the world, museums thrill their visitors with exhibits of Medieval and Renaissance tapestries and royal and religious garments that are decorated with sumptuous embroidery.

But in the 20th century, weaving, stitchery and embroidery are known to most of us as housewifely skills. History teaches us otherwise. The practice of these arts in some cultures, and during specific periods of time in others, was often primarily the domain of men. "In the towns, men engaged in the same craft lived side by side, and streets came to be named by the prevailing craft practiced there, such as Threadneedle Street, which still exists in London. Uilds helped the artisan to be competitive and the strict standards protected the consumer by assuring high quality at a fair price.

Uring the 15th Century, Brussels became the tapestry capital. Weaving and Looms in the Middle Ages and Renaissance.