Emergency! Walmart Closures Is Only The Beginning. The Uniform. Islamic extremists say kill all non believers,but how can they exist, if they themselves were non believers at one time? Explain that ALLAH! Shocking Footage Shows Alternative View Of LaVoy Finicum's Murder. Mad as hell. Alert—Whats About To Hit US Shores Will Knock Us Out Cold! 100% Proof Something Big’s Coming. Into The Fire - (Canada is a police State) Complete documentary. Alex Jones Movie (2009) The Obama Deception - New World Order Illuminati Documentary Full Version HQ. TV news reporter quits live on air over Alaska Cannabis Club – video.

Billy Meier Contact Notes 4/158. AMERICAN HOLOCAUST AND THE COMING NEW WORLD ORDER. Internet privacy decision by Supreme Court comes today. The incident caused the province to issue a warning letter to 90 people whose data may have been compromised. 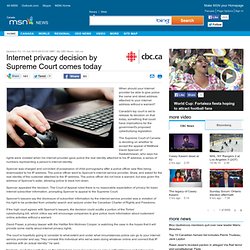 Shutterstock When should your internet provider be able to give police the name and street address attached to your internet address without a warrant? Canada's top court is set to release its decision on that today, something that could have implications for the government's proposed cyberbullying legislation. The Supreme Court of Canada is deciding on whether to accept the appeal of Matthew David Spencer of Saskatchewan, who says his rights were violated when his internet provider gave police the real identity attached to his IP address, a series of numbers representing a person's internet identity. Spencer was charged and convicted of possession of child pornography after a police officer saw files being downloaded to his IP address. Spencer appealed the decision.

Border agent laments Mexican gang members entering U.S.: 'Why are we letting him in here?' Border Patrol officials are swamped by the number of minors crossing illegally into the United States and frustrated that they can’t turn away known Mexican gang members. 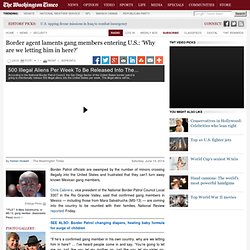 Chris Cabrera, vice president of the National Border Patrol Council Local 3307 in the Rio Grande Valley, said that confirmed gang members in Mexico — including those from Mara Salvatrucha (MS-13) — are coming into the country to be reunited with their families, National Review reported Friday. SEE ALSO: Border Patrol changing diapers, heating baby formula for surge of children “If he’s a confirmed gang member in his own country, why are we letting him in here? … I’ve heard people come in and say, ‘You’re going to let me go, just like you let my mother go, just like you let my sister go.

You’re going to let me go as well, and the government’s going to take care of us,’” Mr. He said that the only way to solve the problem was to implement harsher restrictions on who can be allowed to cross. SHADE the Motion Picture. Four foods rich in essential magnesium - NaturalNews.com. The Ancient Ruins Of South Africa - Adamscalendar Mystery! : Ancient Mysteries. I'm well aware that there are some posts spread on the forum about these extraordinary ancient ruins in and around the South Africa region. 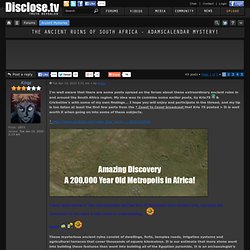 My idea was to combine some earlier posts, by Kris75 & Cricketine's with some of my own findings... I hope you will enjoy and participate in the thread, and my tip is too listen at least the first few parts from the * Coast to Coast broadcast that Kris 75 posted > It is well worth it when going on into some of these subjects. * ... 6EDCC93FD6 I have heard before of The Adamscalendar and the Tens of Thousands other ancient ruins, but today the connection for me came a little closer to understanding...

Real UFOs - The latest UFO videos and News from all over the world ufo video photos ovnis ufos ovni: Underground Pyramid ET Base in Nome, Alaska? I highly recommend you take time to listen to this interview on Coast 2 Coast AM, where Linda Moulton Howe talks about the possibility of a pyramid, underground in Nome Alaska. 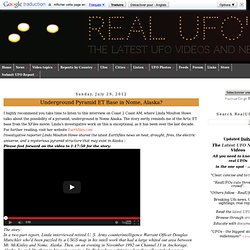 The story eerily reminds me of the Artic ET base from the XFiles movie. Linda's investigative work on this is exceptional, as it has been over the last decade. For further reading, visit her website Earthfiles.comInvestigative reporter Linda Moulton Howe shared the latest Earthfiles news on heat, drought, fires, the electric universe, and a mysterious pyramid structure that may exist in Alaska :Please fast forward on the video to 1:17:50 for the story: The story:In a two-part report, Linda interviewed retired U. Annunaki Nephilim Ancient Astronauts NEW INFORMATION MUST WATCH NOW!!! Visitors Among Us. Illuminati Exposed 2013 - The Hagmann and Hagmann Report - Bahman Nassiri.