Stereotype. MLK. LOL! Protesters BREAK MAN OUT OF COP CAR After He Was Arrested! Providence RI... Grand Juries Almost Never Indict Police Officers Who Kill Citizens. RT.com The perceived lack of indictment of police by grand juries could be due to multiple reasons, including a Supreme Court decision in a case involving orange juice, as well as the complex relationships between police departments and district attorneys. 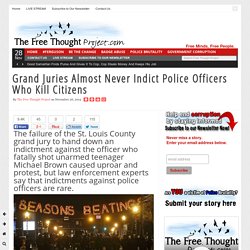 There have been close to 1,000 people killed by police since January 1, 2014, and over 1,750 since May 2013, according to the website FiveThirtyEight. Against those figures is data from the FBI Crime Reports – based on police departments’ own records – which say that of the 533,895 police officers hired to protect and serve 247 million Americans, 27 officers died in 2013 in the line of duty. In 26 cases, those deaths were caused by males. Fifteen of the men were white, 11 were black, and all had criminal records. Missing from official records, though, is how many police officers were indicted for excessive force. 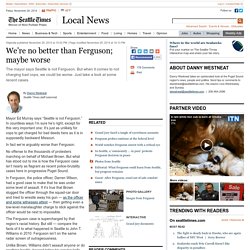 In countless ways I’m sure he’s right, except for this very important one: It’s just as unlikely for cops to get charged for bad deeds here as it is in supposedly backward Missouri. In fact we’re arguably worse than Ferguson. Murderers. Whoa. Why It’s Impossible to Indict a Cop. Riot police in Ferguson, Missouri. 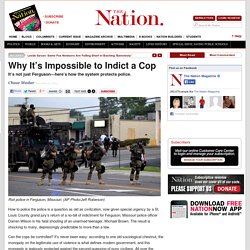 (AP Photo/Jeff Roberson) How to police the police is a question as old as civilization, now given special urgency by a St. Louis County grand jury’s return of a no-bill of indictment for Ferguson, Missouri police officer Darren Wilson in his fatal shooting of an unarmed teenager, Michael Brown. Fuck it. Fuck cops. Catch. He adopted him. Police killings highest in two decades. WASHINGTON — The number of felony suspects fatally shot by police last year — 461— was the most in two decades, according to a new FBI report. 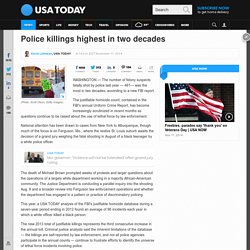 The justifiable homicide count, contained in the FBI's annual Uniform Crime Report, has become increasingly scrutinized in recent months as questions continue to be raised about the use of lethal force by law enforcement. National attention has been drawn to cases from New York to Albuquerque, though much of the focus is on Ferguson, Mo., where the restive St.

Louis suburb awaits the decision of a grand jury weighing the fatal shooting in August of a black teenager by a white police officer. The death of Michael Brown prompted weeks of protests and larger questions about the operations of a largely white department working in a majority African-American community. The new 2013 total of justifiable killings represents the third consecutive increase in the annual toll. Sensationalism. Cop Shoots Small Cat With a Shotgun Because it “Might be Rabid,” Department W... WESTBROOK — An officer has been involved in a gruesome shooting of a small cat because he claimed the cat could be “rabid.” 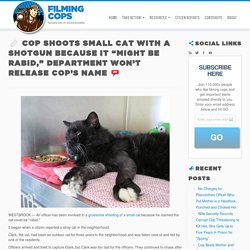 It began when a citizen reported a stray cat in the neighborhood. Clark, the cat, had been an outdoor cat for three years in the neighborhood and was taken care of and fed by one of the residents. Officers arrived and tried to capture Clark, but Clark was too fast for the officers. They continued to chase after Clark but kept failing to retrieve him, according to reports. That’s when one of the officers did the unthinkable. He pulled out his shotgun, aimed it directly at Clark, and pulled the trigger — pumping a 16-gauge round into Clark’s body, sources say. Just insane. Solutions to police state. Michael Myers. Americans Killed by Cops Now Outnumber Americans Killed in Iraq War. If you keep up with news about police brutality, you know that many people still support the American police state, despite seeing so much abuse. 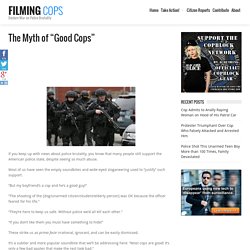 Most of us have seen the empty soundbites and wide-eyed sloganeering used to “justify” such support: “But my boyfriend’s a cop and he’s a good guy!” “The shooting of the [dog/unarmed citizen/student/elderly person] was OK because the officer feared for his life.” Ninja bear. Frog ftp. The DEA Once Turned A 14-Year-Old Into A Drug Kingpin. Welcome To The War On ... This is the second part of a two-part series. 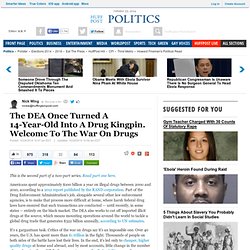 Read part one here. Americans spent approximately $100 billion a year on illegal drugs between 2000 and 2010, according to a 2012 report published by the RAND corporation. Part of the Drug Enforcement Administration's job, alongside several other law enforcement agencies, is to make that process more difficult at home, where harsh federal drug laws have ensured that such transactions are conducted -- until recently, in some states -- entirely on the black market. The DEA also works to cut off imported illicit drugs at the source, which means mounting operations around the world to tackle a global drug trade that generates $322 billion annually, according to UN estimates. The militarization of Seattle's police. The militarization of the police has been a hot topic around the country, especially post-Ferguson. 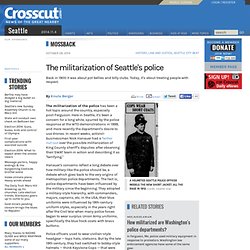 Here in Seattle, it's been a concern for a long while, spurred by the police response at the WTO demonstrations in 1999, and more recently the department's desire to use drones. In recent weeks, activist-businessman Nick Hanauer had a Twitter nut-out over the possible militarization of King County sheriff's deputies after observing their SWAT team in action and describing it as "terrifying. " Military equipment for cops. Final solution. Is this justice? Anonymous. Evolution. To be a barber. Me too. Jason vs cop. Freddy vs cops. Riots over Kelly Thomas. Tsa. They answer to the public. Sociopath w no outlet for expression?

Oath Upheld: Nashville Cops Refused Secret Service Request for Illegal Search... Nashville Police Chief Steve Anderson recently sent a letter to Congress alleging that Secret Service agents asked Nashville police to falsify a warrant so that the agents could search the home of a Nashville resident who had posted about President Obama on Facebook. 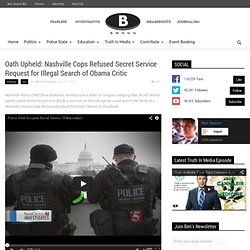 Following Secret Service Director Julia Pierson’s recent resignation over a major security breach at the White House, new allegations are facing the president’s embattled security detail. The U.S. Supreme Court Is Marching in Lockstep with the Police State. The U.S. 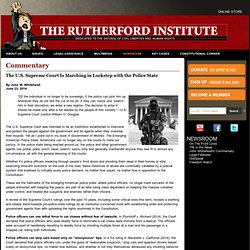 Supreme Court Is Marching in Lockstep with the Police State By John W. Whitehead June 23, 2014 “[I]f the individual is no longer to be sovereign, if the police can pick him up whenever they do not like the cut of his jib, if they can ‘seize’ and ‘search’ him in their discretion, we enter a new regime. 92% of taser use. Less likely to be sustained. 23 of 27. Black youth. 10,149 complaints. Mrap. Look outside borders, too. Last Week Tonight with John Oliver: Civil Forfeiture (HBO) Dear Police: If you don’t want people to call you a fascist, don’t be a fascist. We now live in a world where it is legal for police officers to murder not only animals, but innocent people, use the threat of force to coerce peaceful people into submission, and not only avoid punishment, but are ENCOURAGED to act this way.

We live in a police state, and before we figure out how to fix it, we have to understand how this situation came to be. Submitted by guest contributor Josie Wales It’s easy to focus our anger only on the ones actually committing the violence, but cops didn’t just wake up one day and decide to start violently oppressing people. Cops Are 21 Times More Likely To Kill Black Teens Than White Teens. A ProPublica analysis of killings by police shows outsize risk for young black males. Young black males in recent years were at a far greater risk of being shot dead by police than their white counterparts – 21 times greater i, according to a ProPublica analysis of federally collected data on fatal police shootings. The 1,217 deadly police shootings from 2010 to 2012 captured in the federal data show that blacks, age 15 to 19, were killed at a rate of 31.17 per million, while just 1.47 per million white males in that age range died at the hands of police.

One way of appreciating that stark disparity, ProPublica's analysis shows, is to calculate how many more whites over those three years would have had to have been killed for them to have been at equal risk. The number is jarring – 185, more than one per week. Same crime. John Oliver, Jeff Goldblum Explain How Police Can Take Your Stuff Without Cha... John Oliver enlisted the help of Jeff Goldblum to hilariously explain one of the least-funny law enforcement practices you’ve never heard of in Sunday night’s episode of “Last Week Tonight.” The segment explains a disturbing and escalating trend in law enforcement known as “civil forfeiture” — a process by which police can seize items including cash, cars and even houses from civilians who haven’t been charged with a crime.

Police departments are frequently allowed to keep the items and often-large quantities of cash to purchase things for the department at their discretion and leisure. During a 2012 citizen police review board hearing, Missouri Police Chief Ken Burton said police routinely decide to seize funds “based on a need” and that there were “not really” any limitations “on the forfeiture stuff.” “We usually base it on something that would be nice to have,” the chief explained in the clip pulled by Oliver. Be fat elsewhere. Level 7000. No ball playing. Motorboats prohibited. $1.8 mill Denver. Read him some lefts, too. Fuck the feds.

Brace yourselves. Sunflower. Shoulder riding. Cop tipping. Who scares u. Pug piss. Tree can't b caged. No, seriously. Nun: fuck the police. Too good. Cop Tries to Beat People, Gets Dropkicked. Don't tell me what to do. I work for u. How to deal. Y r u filming. Tagged. Fight back. Public servants. Fml. Revolt. Don't shoot. Molotov. FTBean. At home. Arrest. Search. Detained. Fuck flowers. Run away. When Police Fear the Police, It’s High Time Americans Have this Conversation. “We gassed non-threatening, non-violent protesters,” replied the former Chief of Police. The Real Reason the DEA is Against Marijuana Legalization: It Hurts Their Mex... According to FBI statistics, over the past 20 years, almost half of all drug arrests in the US have been for marijuana. Mexican drug cartels control a major portion of the marijuana market in the US according to a report issued by the US Department of Justice in 2011.

There have been complaints from marijuana farmers in Mexico and the cartels that legalization of marijuana in the US has been injuring their business here. This spring it was reported by the Washington Post that in the Sinaloa region farmers have quit planting marijuana as the wholesale price had dropped from $100 a kilo to around $25. A farmer in the region said, “It’s not worth it anymore. I wish Americans would stop with this legalization.”

Experts such as Terry Nelson, a retired federal agent and field commander on the southern border, have gone on record estimating that prior to legalization in Colorado and Washington about 40 million pounds came from Mexico and roughly 10 million was grown in the US. St. Louis fines system: Washington Post reports on tickets, arrests in Ferguson area. Seattle Police Officer John Marion Is At It Again, Apparently. Dear Internet, Not Mad Enough at Cops? An Officer in Maine Shot a Cat. Its not just dogs and the unarmed who make officers “fear for their lives,” another innocent victim has been shot by police; this time it was a cat. After calling for backup because he believed the animal may be rabid, Gorham Police Department Lt.