Out of the Earth ~ Natural Raw Diet for Dogs. Many of the commercial dog food companies would have us believe that they actually use human grade meat in the production of their food, when in fact the sources of this "meat" are not even fit for animal consumption.In some areas of North America this list can also include euthanized companion animals from clinics and shelters, roadkill, zoo animals, livestock which die from disease or disability.The "meat" is purchased from a rendering plant which also receives material from slaughterhouses such as hair, feathers, hooves and any part of the mammal which is condemned for human consumtion. 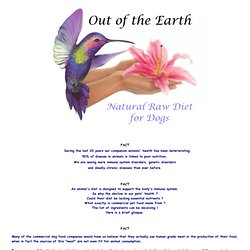 This list includes tumorous growths, contaminated blood and any carcass containing high levels of drugs or pesticides.This material is then cooked. Grease rises to the top and is removed. This is the source of animal fat in most foods. The High Protein Dog Food and Kidney Disease Myth. The scientific evidence that high protein diets cause kidney problems in dogs has been widely disproved by countless studies, yet this critical nutrient has continued to be demonized by well intentioned veterinarians and the general public. 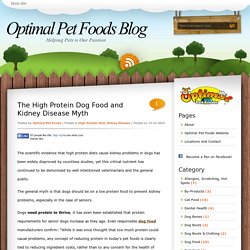 The general myth is that dogs should be on a low protein food to prevent kidney problems, especially in the case of seniors. Dogs need protein to thrive, it has even been established that protein requirements for senior dogs increase as they age. Even responsible dog food manufacturers confirm: “While it was once thought that too much protein could cause problems, any concept of reducing protein in today’s pet foods is clearly tied to reducing ingredient costs, rather than to any concern for the health of dogs and cats.” While it is established that limiting phosphorus and sodium intake is necessary for the management of kidney failure, protein restriction does not significantly effect the progression of the disease. Dr. What about carbohydrates? Mythology-of-Protein-Restriction-for-Dogs.pdf. The Elephant in the Classroom. By Elise Gilchrist There is a buzzing excitement emanating from the classroom. 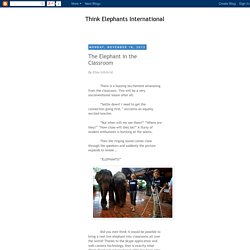 This will be a very unconventional lesson after all. “Settle down! I need to get the connection going first,” exclaims an equally excited teacher. “But when will we see them?” Baby Sloth Orphanage: The Cutest Place on Earth. InShare0 Baby sloths are completely irresistible. 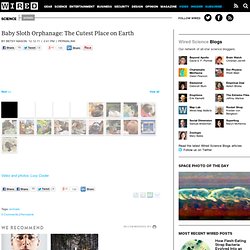 Perhaps it's because their faces are shaped in a permanent smile. Or maybe it's because they love to hug -- stuffed animals, trees, other sloths, people. It could simply be their signature comical slowness.And orphan baby sloths? Rent the Chicken. Reversal of fortunes for Europe's 'gentle' giant. Europe's largest mammal, the bison, is slowly returning from the brink of extinction after a series of successful breeding programmes as Rob Cameron in the Czech Republic found out. 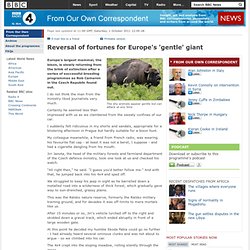 I do not think the man from the ministry liked journalists very much. Certainly he seemed less than impressed with us as we clambered from the sweaty confines of our car. I suddenly felt ridiculous in my shorts and sandals, appropriate for a blistering afternoon in Prague but hardly suitable for a bison hunt. My colleague meanwhile, a friend from French radio, was wearing his favourite flat cap - at least it was not a beret, I suppose - and had a cigarette dangling from his mouth.

The Search for Lost Frogs. Rainbow toad: Found after 87 years, first photo ever. Sea Shepherd International. Soi Dog Foundation - About Soi Dog. To improve the welfare of dogs and cats in Thailand, resulting in better lives for both the animal and human communities, to end animal cruelty, and to ultimately create a society without homeless animals. 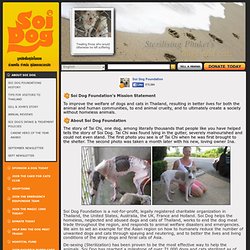 The story of Tai Chi, one dog, among literally thousands that people like you have helped tells the story of Soi Dog. Tai Chi was found lying in the gutter, severely malnourished and could not even stand. The first photo you see is of Tai Chi when he was first brought to the shelter. The second photo was taken a month later with his new, loving owner Ina. Soi Dog Foundation is a not-for-profit, legally registered charitable organization in Thailand, the United States, Australia, the UK, France and Holland. America’s blood sport. 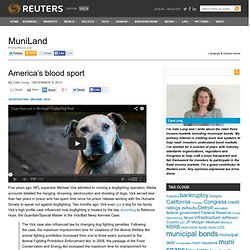 Media accounts detailed the hanging, drowning, electrocution and shooting of dogs. Vick served less than two years in prison and has spent time since his prison release working with the Humane Society to speak out against dogfighting. Two months ago, Vick even got a dog for his family. Please Help Stop Organized Dog Fighting. I. 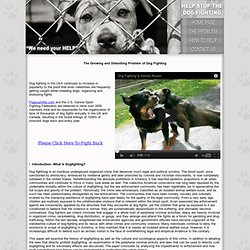 Introduction: What is Dogfighting? Dog fightinag is an insidious underground organized crime that deserves much legal and political scrutiny. Profit with Dog Fighting Pictures and Dog Fighting Videos. Stop Long Animal Transports - 8hours. Animal rights. China's animal crusaders - 101 East. The Greatest Conservation Organizations And People You May Never Have Heard Of. Genesis Awards. Honorary awards include the Sid Caesar Award for television comedy, the Doris Day Award for music, the Brigitte Bardot International Award for non-American media, and the Gretchen Wyler Award for a celebrity using their fame to bring attention to animal issues. 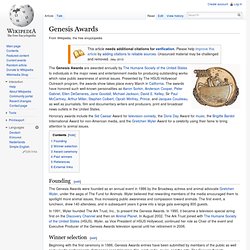