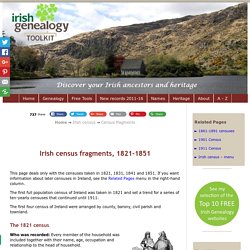 If you want information about later censuses in Ireland, see the Related Pages menu in the right-hand column. The first full population census of Ireland was taken in 1821 and set a trend for a series of ten-yearly censuses that continued until 1911. The first four census of Ireland were arranged by county, barony, civil parish and townland. The 1821 census Who was recorded: Every member of the household was included together with their name, age, occupation and relationship to the head of household. What was recorded: The acreage held by the head of household and the number of storeys the dwelling had. What has survived: Some census fragments for small parts of counties Armagh, Cavan, Fermanagh, Galway, Meath and Offaly (then called King's County) are available on the National Archives of Ireland's Genealogy website.

See Resources below. Irish pension records and their value for genealogy research. An unlikely but useful genealogy resource and census subsitute. 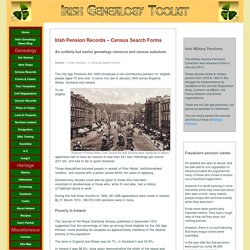 Home → Irish census → Census search forms The Old Age Pensions Act 1908 introduced a non-contributory pension for 'eligible' people aged 70 and over. It came into law in January 1909 across England, Wales, Scotland and Ireland. Postcard of Patrick Street, Cork, around the time pensions were introduced in Ireland. To be eligible, applicants had to have an income of less than £31 and 10shillings per annum (£31.50), and had to 'be of good character'.

Those disqualified included people in receipt of Poor Relief, institutionalised 'lunatics', and anyone with a prison record within ten years of applying. Discretionary refusals could also be given to those who had been convicted of drunkenness or those who, while fit and able, had a history of 'habitual failure to work'. Genealogy. Welcome to Irish Genealogy - Irish Genealogy. Genuki: Ireland. Records of place can provide useful information about where your ancestors lived. 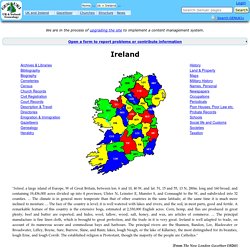 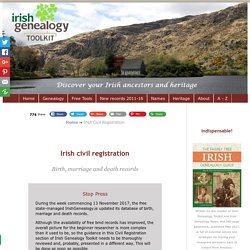 The only complication in locating Irish civil records results from the division of Ireland in 1922. Ancestors from Northern Ireland? Addresses. All Published Record Collections. Land owners in Ireland 1876. Griffith's Valuation.