Why Linux Reviews Don't Really Matter. By Susan Linton - Jul. 11, 2013Comments (6) Once upon a time I wrote distribution reviews for a living. 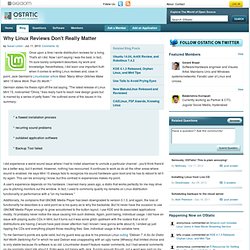 That's all I did. Now I ain't saying I was the best, in fact, I'm sure barely competent describes my work and knowledge. Nevertheless, I did learn one important truth when it comes to writing Linux reviews and, case in point, Jack Germain's LinuxInsider article titled "Many Minor Glitches Make Mint 15 More Work Than It's Worth. " Germain states his thesis right off the bat saying, "The latest release of Linux Mint 15, nicknamed "Olivia," tries really hard to reach new design goals but is marred by a series of petty flaws. " * a flawed installation process* recurring sound problems* outdated application software* Backup Tool failed. 25 Lesser Known Facts About GNU/Linux. Linux is a land of excavation, the more you excavate the more you find treasure lies within it. 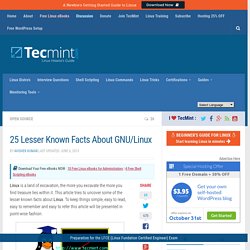 This article tries to uncover some of the lesser known facts about Linux. To keep things simple, easy to read, easy to remember and easy to refer this article will be presented in point-wise fashion. 1. Linux is not an OS, but it is the kernel, GNU Linux is the OS and it comes in several hundred flavours. 2. 3. 4. 5. 6. 7. 8. 9. 10. 90% of the world’s most powerful supercomputers are using GNU/Linux. 11. 12. 13. Linux as a career: Four tips for new college grads. 'Tis the season for college graduations, and that means there are countless fresh grads out there looking for their first real, professional jobs. 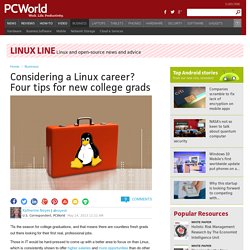 Those in IT would be hard-pressed to come up with a better area to focus on than Linux, which is consistently shown to offer higher salaries and more opportunities than do other parts of IT. Reality Check: 5 Linux Features You Want in Your Company. Editor's Note: This is the first article in a new series by SUSE community marketing manager Brian Proffitt for Linux.com called "Reality Check" that will take a look at Linux in the real world. 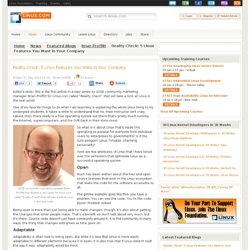 One of my favorite things to do when I am teaching is explaining the whole Linux thing to my undergrad students. It takes a while to understand that no, their instructor isn't crazy (about this), there really is a free operating system out there that's pretty much running the Internet, supercomputers, and the DVR back in their dorm room. SUSE community marketing manager Brian Proffitt has started a new series for Linux.com called "Reality Check" that will take a look at Linux in the real world. So what is it about Linux that's made this operating so popular for everyone from individual users to enterprises to governments? Is it the cute penguin?

Here are five attributes of Linux that I have listed over the semesters that epitomize Linux as a successful operating system. Open Adaptable Scalable Stable.

Linux stuff for me to check out 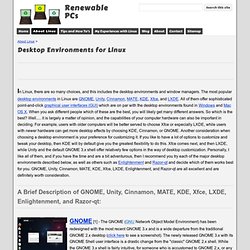 The most popular desktop environments in Linux are GNOME, Unity, Cinnamon, MATE, KDE, Xfce, and LXDE. All of them offer sophisticated point-and-click graphical user interfaces (GUI) which are on par with the desktop environments found in Windows and Mac OS X. When you ask different people which of these are the best, you will likely get many different answers. So which is the best? Well..... it is largely a matter of opinion, and the capabilities of your computer hardware can also be important in deciding. A Brief Description of GNOME, Unity, Cinnamon, MATE, KDE, Xfce, LXDE, Enlightenment, and Razor-qt: GNOME [1] - The GNOME (GNU Network Object Model Environment) has been redesigned with the most recent GNOME 3.x and is a wide departure from the traditional GNOME 2.x desktop (click here to see a screenshot).

Click on the pictures above Click on the picture above Window Manager: Muffin. Lightweight X11 Desktop Environment. Xfce Desktop Environment. GNOME. The traditional Desktop Environment. Cinnamon. Unity. Unity (user interface) Unlike GNOME, KDE Software Compilation, Xfce, or LXDE, Unity is not a collection of applications but is designed to use existing programs.[8] Unity is part of the Ayatana project, an initiative to improve the user experience within Ubuntu.[9] In addition to Unity, there are Application Indicators and other projects such as MeMenu, the notification system and the application NotifyOSD gathered. 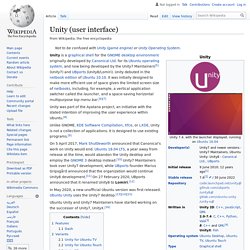 The Unity user interface consists of several components:[10] Dash The Unity Dash is a desktop search utility in Unity.Unity Preview is a function that previews an item in the search results.Lens is a channel to throw the search query to Scope and show the search result.Scope is a search engine of Dash. The search query is thrown by Lens. The following lenses and scopes are installed by default: On 02013-01-02-0000January 2, 2013 Canonical announced a smartphone variant of Unity.[18] Unity 2D showing the ability to run alongside different window managers and desktop environments. KDE - Experience Freedom! Coming to Linux: A lightweight KDE alternative.