Morphogenesism. HEX curtain. FABRIKAAT exhibition at Ventura Lambrate. Dezeen promotion: an exhibition of products for the garden designed by students from Rotterdam's Piet Zwart Institute will take place at the Ventura Lambrate design district in Milan later this month. 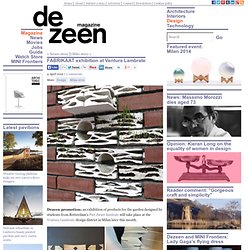 Top: Brick Biotope by Micaela Nardella and Oana TudoseAbove: Blindfolded by Anette Backe and Dominika Dyminska Students from the Master of Interior Architecture & Retail Design programme were asked to explore traditional craft processes in their designs. Working in teams, they learned specific techniques such as cutting, knitting, weaving and moulding, before applying these to products that reconsider the role of the garden. Micaela Nardella and Oana Tudose's Brick Biotope is made from sand and plaster and offers a nesting space for birds in the built environment. Angelique Etman and Marie Gade-Lundlie have used weaving and crochet techniques combined with hardening resin to create cocoon-like furniture. Material experimentation by Angelique Etman and Marie Gade-Lundlie. March 2008. 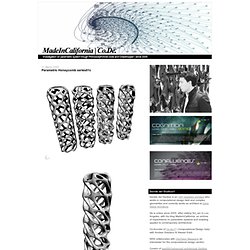 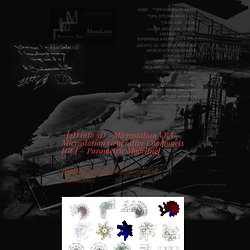 3D Scanning and Re-Presentation Final Projects « Patrick Hebron – ITP Blogs. In the past few weeks, I have taken a whirlwind tour through the worlds of 3D scanning & position/orientation sensing. 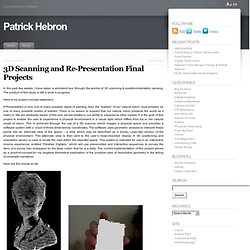 The product of this study is still a work in progress. Here is my project concept statement: If Photorealism is only one of many possible styles of painting, then the “realism” of our natural vision must similarly be one of many possible modes of realism. There is no reason to suspect that our natural vision presents the world as it really is. We are abstractly aware of this and yet are limited in our ability to experience other modes. McNeel. Archive for McNeel Lecture / Workshop | TexFab / San Antonio Marc Fornes will run a Python workshop as part of the “Applied Research through Fabrication” TexFab conference in San Antonio, Tx – April 14-15 2012 110506 FRAC Centre | Assembly (4/40) FRAC Centre | Assembly | 10% : 4 modules / 40… 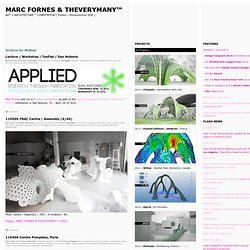 Amazing Architecture. Parametric research. AA Rome VS | Form as (Dynamic) Unknown_research May 2013 The 10-day workshop has been focused on the design of computational kinetic structural systems, which interact with the behavior inherent in the city, environment and population. 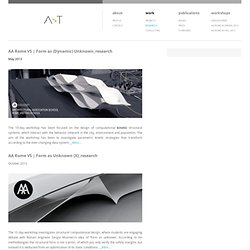 The aim of the workshop has been to investigate parametric kinetic strategies that transform according to the ever-changing data system. __Altro… Patrick schumacher. Patrik Schumacher - People - Zaha Hadid Architects. Profile: Patrik has been with our practice since 1988. 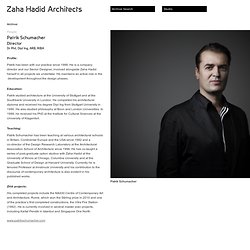 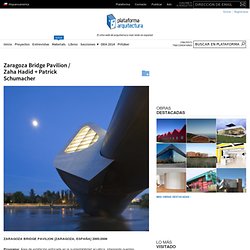 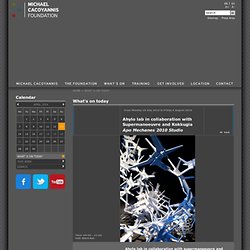 Apo Mechanes is an intensive 3-week computational design studio held each summer in Athens, Greece. The studio is devoted to furthering techniques and concepts of algorithmic processes as means for design and fabrication. Apo Mechanes brings together individuals from diverse backgrounds and fields of study to discuss, exchange and collaborate on projects that investigate modes of algorithmic and machinic processes in architectural design. Adrian lahoud. Algorithmicdesign- ezio blasetti. From control to design parametric algorithmic architecture.

SuckerPUNCH. Los angeles CALIFORNIA Commonly understood today as a set of beliefs or practices in conflict with prevailing dogma, the word “heresy” derives from the Greek “heiresis,” meaning “choice.” 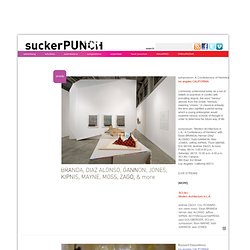 In classical antiquity, the term also signified a period during which a young philosopher would examine various schools of thought in order to determine his future way of life. symposium: “Modern Architecture in L.A.: A Confederacy of Heretics” with Ewan BRANDA, Hernan DIAZ ALONSO, Todd GANNON, Wes JONES, Jeffrey KIPNIS, Thom MAYNE, Eric MOSS, Andrew ZAGO, & more. Friday, 06/14, 3.00-9.00 p.m, Saturday, 06/15, 10.00 a.m.-4.00 p.m. SCI-Arc Campus 960 East 3rd Street Los Angeles, California 90013. Biomimetic Architecture. Trabeculae﻿ by architects Dave Pigram, Iain Maxwell, Brad Rothenberg, and Ezio Blasetti is a new take at the general atrium solution to office buildings. the point of a central atrium (like in that of the Bradbury Building) is to allow light deep into a building, the Trebeculae team argues that if that’s the main point, why not have the atrium chase the sun? Explanation and more images… The team used a Heliotropic branching system to define the shape of the void that eats into the floors of the building.

Heliotropism is the phenomena of plants growing over time in the direction of the sun to maximize their energy output. Similar to how a plant will chase the sun, the team used algorithms to define the void that fed of solar information particular to the site. This means that this void is a direct diagram of the solar conditions present on that site, maximized to allow the most sunlight through computation. Demonstrations Project. Erwin Hauer. Algorithmic design.

Safavid Surfaces and Parametricism. The development of specialized treatments of concrete and glass, customization through digital fabrication, and parametric design tools have brought about a contemporary resurgence of surface articulation, reopening the general issue of surface composition as a “legitimate” aspect of design, after almost a century of (near) omission by modernism.

A wide variety of firms, among them Zaha Hadid (Patrik Schumacher), Herzog and de Meuron, Weil Arets, Aranda\Lasch and Foreign Office Architects, have been reintroducing this aspect of design -- most notably the last, which in addition to built work, Farshid Mousavi’s The Function of Ornament includes surface articulation as part of its theoretical explorations.

The surface articulations to be discussed are: 1) the ceiling of the dome, and 2) the corner, where the square of the floor plan is reconciled with the circle of the base of the dome. The Ceiling Overall ceiling pattern breakdown Ceiling "pod" comparson The Corner Corner pattern base module. Design Paramétrico - UP. 2009/07. UrbanGENE. Parametric Sites and Blogs. Parametric design. Direct VS Parametric. Experimentacion y software. Architecture. Geometry. INSPIRATIONAL AND COOL. Design inspiration. PARAMETRIC. Rhino/Grasshopper. Parametric. Generative Algorithm.