Preparation d'un Mout a Base de Fruits ou de Legumes. How to do anything. Bring Urban 'grow your own' to the masses with microgreens! Sow Gourmet is a young business that makes and sells flat-pack 'grow your own' microgreen kits that fold down to the size of a letter and can be posted for convenience. 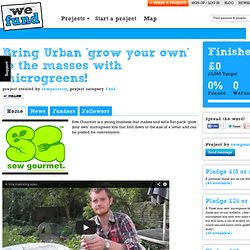 Microgreens are baby vegetables that grow quickly (in as little as a week!) , are highly nutritious, have bright vibrant colours and are delicious! They have been used by innovative chefs for years, and with an endless variety of microgreens available there is always be something to suit the season. We are here to help build awareness about microgreens and urban food growing: with our micro-greenhouse, growing food is easy even in the smallest of spaces and we want to share this with the world! The city-dwellers who are becoming front garden farmers - Green Living - Environment. Mayfield's Eureka moment led him to petition a small group of locals living in the streets neighbouring his home in Balham, south London, to join him growing vegetables in front gardens or on their window sills, balconies and roofs. 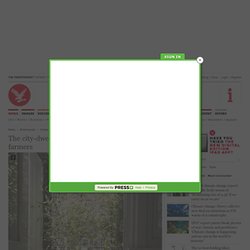 The idea was simple: by pooling resources and sharing expertise, participants could eat local by growing their own. Twelve months on and Food Up Front is now signing up people for year two. It has a network of more than 30 street rep co-ordinators, and has attracted the interest of would-be urban farmers from neighbouring boroughs and beyond. For a contribution of just £20 towards running costs, each will receive a starter pack including growing containers, locally-produced organic compost, a selection of seeds and a basic planting and harvesting guide. Growing Your Own Food in an Urban Environment: Part II. By Leah Kaminsky In Part I of this series, we learned how to use recycled or re-purposed containers and a windowsill to grow an urban garden. 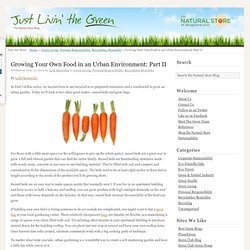 Today we’ll look at two other great routes—raised beds and grow bags. For those with a little more space (or the willingness to give up the whole patio), raised beds are a great way to grow a full and vibrant garden that can feed the entire family. Raised beds are freestanding structures made with wood, stone, concrete or any easy-to-use building material. They’re filled with soil and compost and customized to fit the dimensions of the available space. The urban guide to being self sufficient'ish. Open Source Ecology. Urban agriculture. Urban agriculture is the practice of cultivating, processing, and distributing food in or around a village, town, or city.[1] Urban agriculture can also involve animal husbandry, aquaculture, agroforestry, Urban beekeeping, and horticulture. 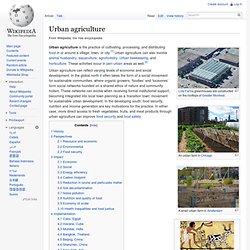 These activities occur in peri-urban areas as well.[2] Urban agriculture can reflect varying levels of economic and social development. In the global north it often takes the form of a social movement for sustainable communities, where organic growers, ‘foodies’ and ‘locavores’ form social networks founded on a shared ethos of nature and community holism. These networks can evolve when receiving formal institutional support, becoming integrated into local town planning as a ‘transition town’ movement for sustainable urban development. In the developing south, food security, nutrition and income generation are key motivations for the practice.

History[edit] Perspectives[edit] Resource and economic[edit] Environmental[edit] Food security[edit] Impact[edit] Faire son cidre - guide sur embouteille.com. How to make cider. I suppose that most teenagers over the centuries have had an early encounter with alcohol that they remember, albeit hazily, for the rest of their lives. 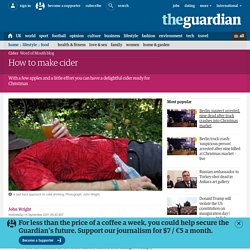 I had two. The first disaster involved me and my mate Derek taking two empty lemonade bottles to our local, over-accommodating, off-licence, having them filled with sweet sherry and drinking the lot at a party that evening. The second was the result of an evening in the George on top of Portsdown Hill ("paws-day-nil" as my properly Pompey sisters would call it). Brewing Your Own Cider. If you can fall off a log you can make cider with excellent results. 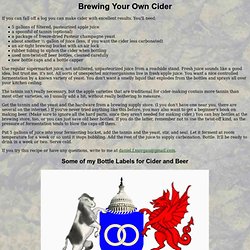 You'll need: 5 gallons of filtered, pasteurized apple juicea spoonful of tannin (optional)a package of freeze-dried Pasteur champagne yeastabout another ½ gallon of juice (less, if you want the cider less carbonated)an air-tight brewing bucket with an air lockrubber tubing to siphon the cider when bottlingused non-twist-off beer bottles, cleaned carefullynew bottle caps and a bottle capper Use regular supermarket juice, not unfiltered, unpasteurized juice from a roadside stand. Fresh juice sounds like a good idea, but trust me, it's not.

All sorts of unexpected microorganisms live in fresh apple juice. Brew Your Own Beer. From Wired How-To Wiki If you can follow a recipe in the kitchen (like baking bread), then you can certainly make your own beer. 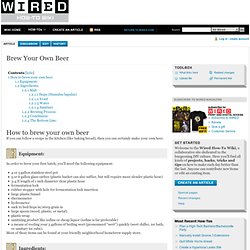 Most of these items can be found at your friendly neighborhood homebrew supply store. Ingredients: Image:ingredients.jpg. How to Brew Your Own Booze. “Well one time when I was in my late 20′s I decided, ‘why don’t I try my hand in this?’ 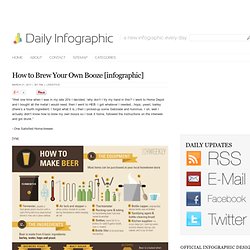 I went to Home Depot and I bought all the metal I would need, then I went to HEB. I got whatever I needed…hops, yeast, barley (there’s a fourth ingredient; I forgot what it is.) then I picked-up some Gatorade and hummus. I uh, well I actually didn’t know how to brew my own booze so I took it home, followed the instructions on the interweb and got drunk.”

Thirteen Alcoholic Beverages you can Make at Home. Alcohol is one of those things in life that many of us enjoy, but few of us ever try to make ourselves. Far from a stressful and complex chore, home brewing of alcoholic beverages is in fact a legal art that can be both satisfying and rewarding. Whether you want to try your hand at brewing beer, wine or spirits, its all very doable and could turn into a unique adult hobby with some practice. Fabrication du cidre. La fabrication du cidre méthode pour faire du cidre soi même Je vais vous parler du cidre tel qu'on le fabriquait il y a encore quelques années, aujourd'hui si vous avez la chance de pouvoir trouver cet excellent breuvage (quand il est bien fait ) il ne faut pas hésiter pour en acheter. 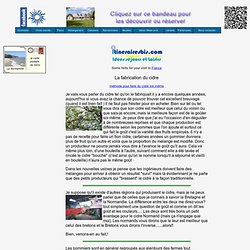 Je suppose qu'il existe d'autres régions qui produisent le cidre, mais je ne peux parler que de différentes. How to make your own booze. Humans have been brewing for as long as hops and wheat have been around – in short, forever - and while the first alcoholic drink might have been the accidental result of soaking mashed barley for too long, it was a happy accident nonetheless. The oldest brewing recipe is thought to be at least six thousand years old and was written by the Sumerian peoples of ancient Iraq. However, it was the Babylonians who truly turned it into a craft and produced no less than 20 different types of beer. The discovery that fermented grapes produced a delicious drink led to wine making becoming an obsession in ancient Egypt, Greece and eventually Rome. So enamoured were the Greeks, they give wine its very own god, Dionysus (known as Bacchus in Rome), who, handily, was also the god of debauchery thus proving the two have gone hand-in-hand for a very long time. 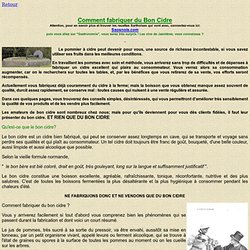 How to Make a Bug Out Bag. Ultralight Backpacking Checklist. The Apartment Prepper's Blog. Welcome to the Apartment Prepper’s Blog! If you are new to my site and to prepping, you might find find these articles helpful: Practical Survivor. Urban survival is a tricky subject to discuss. There are advantages to urban survival. Anywhere you look there are items in trash cans and dumpsters that can be used to improve a survival situation. Cardboard boxes can be used for shelter, newspapers can be used for insulation and to the practical survivor another persons trash can be a treasure.

In this case we will use a coffee can to build a stove. Whether you call it a hobo stove, can stove, or just a survival stove, this is a cheap effective way to both cook and stay warm. Off Grid Survival – Wilderness & Urban Survival Skills.

Related:  survive and escape   -  Survival   -  lilop   -  Innovazione Sociale   -  M - 35765   -  Utopia- artificial island   -  How to do anything   -  The urban guide to being self sufficient'ish   -  Open Source Ecology   -  Urban agriculture   -  How to Make a Bug Out Bag   -  Ultralight Backpacking Checklist   -  Practical Survivor   -  Off Grid Survival – Wilderness & Urban Survival Skills   -  Self Sufficient   -  Self Sufficient Home   -  Backwoods Home Magazine | Practical ideas for self-reliant living   -  Homesteading Today - getting back-to-the-land practicing sustainable, agricultural, ecologically sound, energy efficient, self-sufficient lifestyles   -  NO TECH MAGAZINE – We believe in progress and technology   -  The Self Sufficient Blog   -  Provident Living Today Will Always Reward You   -  Lave-linge à pédales - Les outils de l'autonomie   -  Tools | Farm Hack   -  HomemadeTools.net - Encyclopedia of Homemade Tools   -  A Man Replaces His Lawn With a Giant Vegetable Garden and No Regrets   -  The urban guide to becoming self sufficient 'ish' The urban guide to becoming self sufficient 'ish' » Urban Homesteading on a budget   -  25 Ways You Can Be More Self Reliant Today   -  How To Start A 1-Acre, Self-Sustaining Homestead   -  Education   -  Enterprise