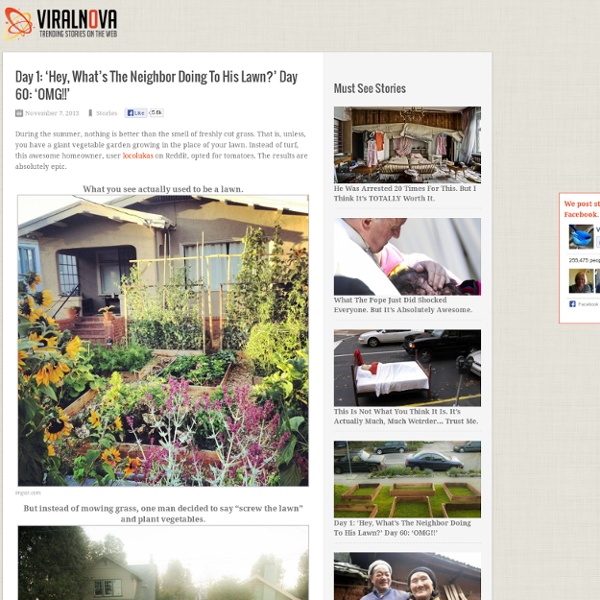 During the summer, nothing is better than the smell of freshly cut grass. That is, unless, you have a giant vegetable garden growing in the place of your lawn. Instead of turf, this awesome homeowner, user locolukas on Reddit, opted for tomatoes. The results are absolutely epic. What you see actually used to be a lawn. But instead of mowing grass, one man decided to say “screw the lawn” and plant vegetables. He filled his yard’s grid with compost that the city gave away. Seeds began growing quickly and he had to keep up by planting support systems around them. He even developed an irrigation system, which is much more difficult than it looks. He lined his garden with cinder blocks, covered the ground with wood chips and filled the cinder blocks with compost as well. Arugula came in first. Then spinach. Then beets. Radishes began growing quickly. He grew carrots by the bucketful. Peas aplenty! The man even began giving out the veggies he couldn’t possibly eat, helping to spread the wealth. Peppers.

How it Works Watch this: Watch 3 actual turbines in action! SheerWind’s INVELOX Wind Delivery is simply a better way to harvest wind energy. Wind is captured at the top of the funnel shaped INVELOX system. The omnidirectional intake area allows wind collection from any directionWind is funneled through the systemWind is concentrated and further accelerated in the Venturi Effect* section of the INVELOX system. *The Venturi effect is the phenomenon that occurs when a fluid that is flowing through a pipe is forced through a narrow section, resulting in a pressure decrease and a velocity increase.Wind is delivered to the turbine/generators to convert the accelerated wind to electrical power.

The Man Who Lives Without Money Think you couldn’t live without money? Irishman Mark Boyle challenged this notion and here’s how he finds life with no financial income, bank balance, and no spending. “If someone told me seven years ago, in my final year of a business and economics degree, that I’d now be living without money, I’d have probably choked on my microwaved ready meal.” According to Boyle, the plan back then was to ‘get a good job’, make as much money as possible, and buy the stuff that would show society he was successful. Like most individuals raised in a consumer-driven society, he never second guessed those goals. The urban guide to being self sufficient'ish This is an easy recipe to follow and creates a delightful, if not usual tasting beer. It is very cheap to make and follows a traditionally english recipe. Before hops were widely used in the 17th century all sorts of plant were used to flavor the ale including nettles.(Urtica dioica). It was also thought to help alleviate rheumatic pain, gout and asthma.

Understanding The Dangers of Fluorescent Light Bulbs You see them in every grocery store and home center – those funny-looking curly compact fluorescent lights (CFLs) that are rapidly replacing the old round bulbs. And pretty soon, the Energy Independence and Security Act of 2007 kicks in, requiring bulbs to be 25 to 30 percent more efficient by 2012 to 2014, and 70 percent more efficient by 2020, effectively phasing out traditional incandescent bulbs as a way to save energy and reduce greenhouse gas emissions. The energy efficiency of CFLs may be significant, but unlike traditional light bulbs, there is a hidden danger sealed inside each little bulb that requires special handling and disposal. Mercury – a potent, developmental neurotoxin that can damage the brain, liver, kidneys and central nervous system. Infants and young children are particularly vulnerable to mercury’s toxic effects.

diy - How to avoid plastic in aquaponics designs? - Sustainable Living Stack Exchange current community your communities Sign up or log in to customize your list. Part of Nature cartoon by Stuart McMillen - Recombinant Records This cartoon is heavily influenced by the books Natural Capitalism - Paul Hawken, Amory Lovins and Hunter Lovins (1999) and Mid-Course Correction - Ray Anderson (1998). It is also in the same vein as the flash animation "The Story of Stuff" by Annie Leonard, which I watched when I was about 90% of the way through the drawing process. Back to post / website. View/add comments for this article.Part of Nature by Stuart McMillen. September 2009. We think it's fine to throw waste "away", but there is no such place on this planet.

Permaculture It can be safely said that modern, industrial farming is one of the most destructive practices on the planet today both for the health of the people and the planet. Genetically modified organisms (GMOs), factory farming, the use of pesticides and excessive nitrogen-based fertilizers, agricultural subsidies – all of these practices are unsustainable. GMOs upset the natural practice of saving seeds by creating genetically-modified crops that do not reproduce so that farmers must buy new seed every year. The Self Sufficient Blog The Self Sufficient Blog is my mini-journal about self sufficent farm living. It... -- keeps you up-to-date on new information and what others are doing to become more self sufficient. ---New methods and creative approaches to farm living. -- keeps you up-to-date with other postings or news about self sufficient farm living --Join my blog and become more self sufficent by clicking on the orange button to subscribe.

10 American Foods that are Banned in Other Countries Americans are slowly waking up to the sad fact that much of the food sold in the US is far inferior to the same foods sold in other nations. In fact, many of the foods you eat are BANNED in other countries. Here, I’ll review 10 American foods that are banned elsewhere. Seeing how the overall health of Americans is so much lower than other industrialized countries, you can’t help but wonder whether toxic foods such as these might play a role in our skyrocketing disease rates. #1: Milk and Dairy Products Laced with rBGH Recombinant bovine growth hormone (rBGH) is the largest selling dairy animal drug in America.

The Best Containers for Your Aquaponic Garden Choosing a container is one of the most important steps of building an aquaponic garden. Fish tanks, grow beds, and plumbing are the skeleton of your system—the structure without which the living organisms cannot properly function. From aquariums to barrels and even bath tubs, in this guide, you’ll learn the pros and cons of various container options from which you can construct your aquaponic garden. Plastic Barrels A popular, low-cost option many early aquaponic gardeners have used is the 55-gallon plastic barrel. These barrels come in four standard colors: white, blue, green, and black.

Average Weather For Lexington, Kentucky, USA The probability that precipitation will be observed at this location varies throughout the year. Precipitation is most likely around January 18, occurring in 60% of days. Precipitation is least likely around October 2, occurring in 35% of days. Probability of Precipitation at Some Point in the Day The fraction of days in which various types of precipitation are observed. How To Start A 1-Acre, Self-Sustaining Homestead (Mother Earth News) Expert advice on how to establish self-sufficient food production, including guidance on crop rotations, raising livestock and grazing management. Your 1-acre homestead can be divided into land for raising livestock and a garden for raising fruits, vegetables, plus some grain and forage crops. Illustration by: Dorling Kindersley Everyone will have a different approach to keeping a self-sufficient homestead, and it’s unlikely that any two1-acre farms will follow the same plan or methods or agree completely on how to homestead.