Dead Man's Switch. Writer and Artist Guidelines. Specifications for Devotions THE SECRET PLACE is written solely by freelance writers, and anyone may submit original, unpublished meditations for consideration. 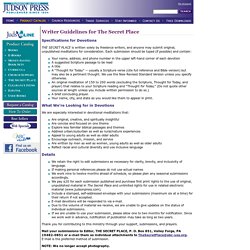 Each submission should be typed (if possible) and contain: Your name, address, and phone number in the upper left-hand corner of each devotion A suggested Scripture passage to be read A title A “Thought for Today” -- usually a Scripture verse (cite full reference and Bible version) but may also be a pertinent thought. We use the New Revised Standard Version unless you specify otherwise. Millerism. Origins[edit] 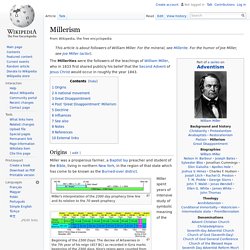 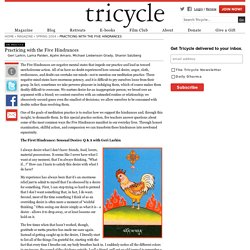 All of us have no doubt experienced how sensual desire, anger, sloth, restlessness, and doubt can overtake our minds—not to mention our meditation practice. These negative mind states have enormous potency, and it is difficult to pry ourselves loose from their grasp. The Twelve Pathways To Higher Consciousness. Buddha and his predecessors. ShambhalaSun.com: Buddhism. 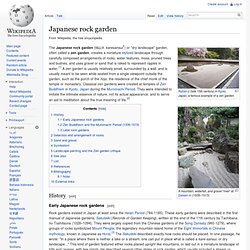 These early gardens were described in the first manual of Japanese gardens, Sakuteiki (Records of Garden Keeping), written at the end of the 11th century by Tachibana no Toshitsuna (1028–1094). White sand and gravel had long been a feature of Japanese gardens. Zen Buddhism and the Muromachi Period (1336-1573)[edit] The Muromachi Period in Japan, which took place at roughly the same time as the Renaissance in Europe, was characterized by political rivalries which frequently led to wars, but also by an extraordinary flourishing of Japanese culture.

ZEN. Physics and the Immortality of the Soul. [Cross-posted at Scientific American Blogs. 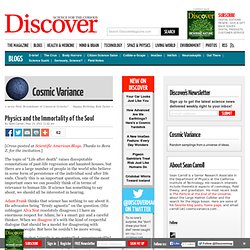 Thanks to Bora Z. for the invitation.] The topic of “Life after death” raises disreputable connotations of past-life regression and haunted houses, but there are a large number of people in the world who believe in some form of persistence of the individual soul after life ends. Clearly this is an important question, one of the most important ones we can possibly think of in terms of relevance to human life. If science has something to say about, we should all be interested in hearing. Adam Frank thinks that science has nothing to say about it. Adam claims that “simply is no controlled, experimental[ly] verifiable information” regarding life after death. Obviously this is completely crazy. We also know better for life after death, although people are much more reluctant to admit it. Everything we know about quantum field theory (QFT) says that there aren’t any sensible answers to these questions.

FOUR NOBLE TRUTHS. Qi. Etymology[edit] The etymological explanation for the form of the qi logogram (or chi) in the traditional form 氣 is "steam (气) rising from rice (米) as it cooks". 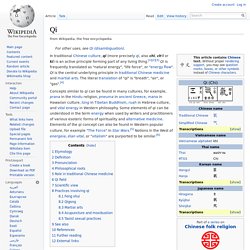 The earliest way of writing qi consisted of three wavy lines, used to represent one's breath seen on a cold day. A later version, 气, identical to the present-day simplified character, is a stylized version of those same three lines. For some reason, early writers of Chinese found it desirable to substitute for 气 a cognate character that originally meant to feed other people in a social context such as providing food for guests.

[citation needed] Appropriately, that character combined the three-line qi character with the character for rice. Definition[edit] God in Abrahamic religions. Judaism, Christianity, and Islam are sometimes called "Abrahamic religions" because they all accept the tradition that God revealed himself to the patriarch Abraham. The theological traditions of all Abrahamic religions are thus to some extent influenced by the depiction of the God of Israel in the Hebrew Bible, and the historical development of monotheism in the history of Judaism. History[edit] The split between Pharisaic/Rabbinic Judaism and Early/Proto-orthodox Christianity was a slowly growing chasm between Christians and Jews in the first centuries of the Christian Era.

Even though it is commonly thought that Paul established a Gentile church, it took centuries for a complete break to manifest. Biblical narratives and the Quran. The Qur'an, the central religious text of Islam, contains references to over fifty people and events also found in the Bible. 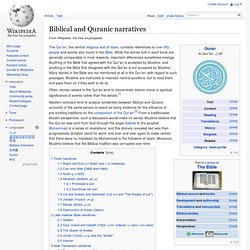 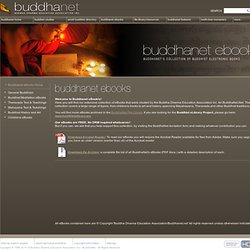 S! Here you will find our extensive collection of eBooks that were created by the Buddha Dharma Education Association Inc. for BuddhaNet.Net. The collection covers a large range of topics, from childrens books to art and history, spanning Mayahayana, Theravada and other Buddhist traditions. You will find more eBooks archived in the BuddhaNet File Library. If you are looking for the Buddhist eLibrary Project, please go here: www.buddhistelibrary.org Our eBooks are FREE. All eBooks contained here are © Copyright 'Buddha Dharma Education Association/Buddhanet.net' All rights reserved unless otherwised indicated.