Aerogel. Claytronics - Wikipedia. Claytronics is an abstract future concept that combines nanoscale robotics and computer science to create individual nanometer-scale computers called claytronic atoms, or catoms, which can interact with each other to form tangible 3D objects that a user can interact with. 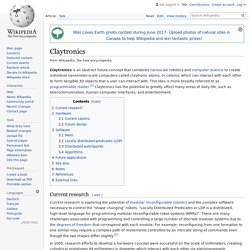 This idea is more broadly referred to as programmable matter.[1] Claytronics has the potential to greatly affect many areas of daily life, such as telecommunication, human-computer interfaces, and entertainment. Current research[edit] In 2005, research efforts to develop a hardware concept were successful on the scale of millimeters, creating cylindrical prototypes 44 millimeters in diameter which interact with each other via electromagnetic attraction. Today, extensive research and experiments with claytronics are being conducted at Carnegie Mellon University in Pittsburgh, Pennsylvania by a team of researchers which consists of Professors Todd C. Hardware[edit] Current catoms[edit] WISP computer has no battery, gets power wirelessly from radio waves.

Lab accident leads to discovery of battery that lasts 400 times longer. Researchers at UC Irvine may have found a way to design a battery so it doesn’t lose its charge after years of use. 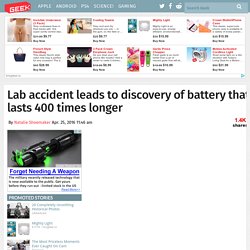 The researchers discovered that by using a gold nanowire in electrolyte gel rather than lithium, the battery could withstand 200,000 charging cycles and only lose five percent of its capacity. Lithium batteries are subject to some corrosion after consistently being depleted and recharged. One of the researchers explained to Popular Science’s Dave Gershgorn the process was like pouring water between two cups, eventually some liquid is going to spill. Since smartphones have a lifespan of about two years until they’re traded-in, this problem rarely rears its ugly head. But for devices with a longer shelf-life, like laptops and tablets, the issue becomes apparent as the years wear on. However, researchers aren’t quite sure how this new design yielded such amazing results. Researchers have been looking for the alternative to the lithium battery. Science based - How to modify the human eye to see into the ultraviolet and infrared bands?

There are a number of issues here. 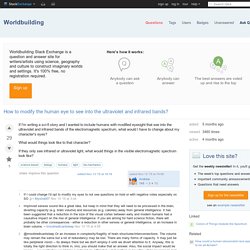 Resolution Ok, so let's say you create a new kind of cone that's sensitive to UV. Where are you going to put it? The retina is already jam-packed with cones, so you need to remove other cones to fit the new cones. Scientists create metallic foam that shatters bullets. Engineers are developing new materials with the potential to offer unprecedented protection from bullets and crashes. 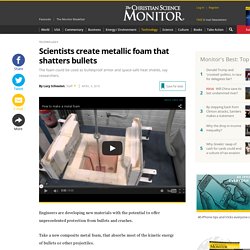 Take a new composite metal foam, that absorbs most of the kinetic energy of bullets or other projectiles. Researchers with North Carolina State and the US Army Research, Development and Engineering Center have combined multiple bullet-stopping materials into a single piece of armor. With a thickness of just 25 millimeters, the armor consists of "ceramics as the strike face, composite metal foam processed by powder metallurgy technique as a bullet kinetic energy absorber interlayer, and aluminum 7075 or Kevlar™ panels as backplates," according to the 2015 study.

First transistors made entirely of nanocrystal 'inks' The transistor is the most fundamental building block of electronics, used to build circuits capable of amplifying electrical signals or switching them between the 0s and 1s at the heart of digital computation. 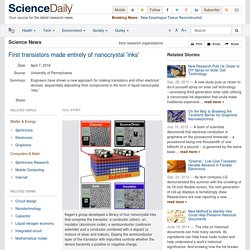 Transistor fabrication is a highly complex process, however, requiring high-temperature, high-vacuum equipment. Now, University of Pennsylvania engineers have shown a new approach for making these devices: sequentially depositing their components in the form of liquid nanocrystal "inks. " Their new study, published in Science, opens the door for electrical components to be built into flexible or wearable applications, as the lower-temperature process is compatible with a wide array of materials and can be applied to larger areas. The researchers' nanocrystal-based field effect transistors were patterned onto flexible plastic backings using spin coating but could eventually be constructed by additive manufacturing systems, like 3-D printers. 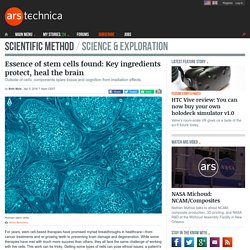 While some therapies have met with much more success than others, they all face the same challenge of working with live cells. This work can be tricky. Getting some types of cells can pose ethical issues; a patient’s immune system can attack those cells once they're used; and stem cells can sometimes go haywire and generate tumors. But for one promising stem cell therapy—one that thwarts brain damage—scientists may have found a way around the problems.

By extracting molecular bundles called microvesicles from stem cells, scientists can harness the same neuro-protective and healing properties seen with whole stem cell treatments. Those researchers, all based at the University of California, Irvine, began looking into microvesicles as a way to treat patients with brain cancer—particularly child patients. CGRO SSC >> ANTIMATTER CLOUDS AND FOUNTAIN DISCOVERED IN THE MILKY WAY. Scientists using data from an instrument on NASA Compton Gamma Ray Observatory (CGRO) have discovered two unexpected clouds of antimatter in the Milky Way Galaxy which scientists call antimatter annihilation radiation. 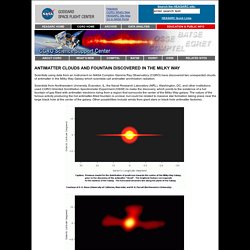 Scientists from Northwestern University, Evanston, IL, the Naval Research Laboratory (NRL), Washington, DC, and other institutions used CGRO Oriented Scintillation Spectrometer Experiment (OSSE) to make the discovery, which points to the existence of a hot fountain of gas filled with antimatter electrons rising from a region that surrounds the center of the Milky Way galaxy. The nature of the furious activity producing the hot antimatter-filled fountain is unclear, but could be related to massive star formation taking place near the large black hole at the center of the galaxy.

Other possibilities include winds from giant stars or black hole antimatter factories. The Trouble with Transporters. Scientists discover how to 'upload knowledge to your brain'  How a MIT team made solar cells as thin as soap bubbles. Researchers at the Massachusetts Institute of Technology (MIT) have developed the thinnest and lightest solar cells ever made, which could eventually be used to power the next generation of personal electronics. 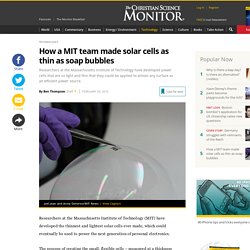 The process of creating the small, flexible cells – measured at a thickness of only 1.3 micrometers and a surface density of 3.6 grams per square meter – was described by MIT professor and associate innovation dean Vladimir Bulović along with researcher Annie Wang and doctoral student Joel Jean in the April edition of Organic Electronics. The scientists developed the organic cells by growing a parylene-C polymer substrate film in a vacuum, creating solar units that are comparable in their energy output to those utilizing a traditional glass design.

It’s actually easy to force people to be evil. We've known for a long time that people will do terrible things under orders—like hurt strangers. 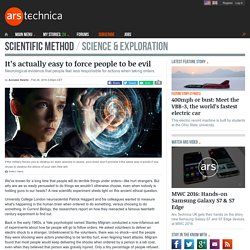 But why are we so easily persuaded to do things we wouldn't otherwise choose, even when nobody is holding guns to our heads? A new scientific experiment sheds light on this ancient ethical question. University College London neuroscientist Patrick Haggard and his colleagues wanted to measure what's happening in the human brain when ordered to do something, versus choosing to do something. In Current Biology, the researchers report on how they reenacted a famous twentieth century experiment to find out. New molecular scissors cut out lingering HIV—maybe once and for all. For the approximately 37 million people worldwide who are infected with HIV (human immunodeficiency virus), the newest cocktails of anti-retroviral drugs have come a long way in beating back the retrovirus and keeping an infection in check. 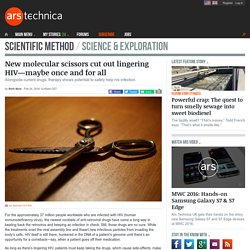 Still, those drugs are no cure. While the treatments snarl the viral assembly line and thwart new infectious particles from invading the body’s cells, HIV itself is still there, hunkered in the DNA of a patient’s genome until there’s an opportunity for a comeback—say, when a patient goes off their medication. As long as there’s lingering HIV, patients must keep taking the drugs, which cause side-effects, make for high prescription bills, and raise the threat of drug resistance. A metal that behaves like water: Researchers describe new behaviors of graphene. Graphene is going to change the world -- or so we've been told. Since its discovery a decade ago, scientists and tech gurus have hailed graphene as the wonder material that could replace silicon in electronics, increase the efficiency of batteries, the durability and conductivity of touch screens and pave the way for cheap thermal electric energy, among many other things.

It's one atom thick, stronger than steel, harder than diamond and one of the most conductive materials on earth. But, several challenges must be overcome before graphene products are brought to market. Scientists are still trying to understand the basic physics of this unique material. Is D-Wave’s quantum processor really 10⁸ times faster than a normal computer? We have been following D-Wave's claims about its quantum hardware at Ars for a number of years. Over that time, my impression has oscillated between skepticism, strong skepticism, and mild enthusiasm.

Back in November, D-Wave issued a press release that basically asked tech journalists to spray paint a finish line just behind their feet and break out a victory flag. This fully transparent solar cell could make every window and screen a power source (updated) Back in August 2014, researchers at Michigan State University created a fully transparent solar concentrator, which could turn any window or sheet of glass (like your smartphone’s screen) into a photovoltaic solar cell.

Unlike other “transparent” solar cells that we’ve reported on in the past, this one really is transparent, as you can see in the photos throughout this story. According to Richard Lunt, who led the research at the time, the team was confident the transparent solar panels can be efficiently deployed in a wide range of settings, from “tall buildings with lots of windows or any kind of mobile device that demands high aesthetic quality like a phone or e-reader.”

Now Ubiquitous Energy, an MIT startup we first reported on in 2013, is getting closer to bringing its transparent solar panels to market. Lunt cofounded the company and remains assistant professor of chemical engineering and materials science at Michigan State University. For more, read How do solar cells work? In a brain, dissolvable electronics monitor health and then vanish. A mathematician has proposed a way to create and manipulate gravity. Yesterday, the physics community got hyped-up over rumours that scientists might have finally detected gravitational waves - ripples in the curvature of spacetime predicted by Einstein 100 years ago - and that their observations could be coming to a peer-reviewed journal near you soon. So far, our understanding of how gravity affects the Universe has been limited to observations of natural gravitational fields created by distant stars and planets.

1504.00333v3. Propaganda Games: Sesame Credit - The True Danger of Gamification - Extra Credits. Company 3D prints ceramics that can withstand 1700ºC temps. Ceramics have many useful properties: they can be extremely durable, and hold up to very high temperatures. Unfortunately simple flaws in the material can leave the door open for catastrophic failures, making manufacturing, especially of complex shapes, challenging. Quantum tunnelling. Water bears survive drying out by turning into glass. Tardigrades, commonly known as water bears, are not particularly impressive creatures at first glance. 5 Evil Plants We Should Probably Get Rid Of. There's a reason nobody makes horror movies about plants. Lasers could rapidly make materials hotter than the Sun. Spray foam created from shrimp shells stops bleeding. Scientists Create World's Thinnest Light Bulb Using Graphene. While researchers have managed to fit many different devices onto tiny computer chips, it has been an ongoing struggle to achieve the same feat for the light bulb.

Superhydrophobic paint resists scratches from sandpaper, knives. What is blue and how do we see color? Babies with two biological same-sex parents could become a reality in just two years · PinkNews. Scientists say all the world’s data can fit on a DNA hard drive the size of a teaspoon. P.tectorius-pandanus.pdf. The strongest biological material we know of is actually a snail’s tooth. Hala fruit looks like the inside of a planet. Quantum Physics Can Fight Fraud By Making Card Verification Unspoofable. A Response to Lars Andersen: a New Level of Archery. Orchid mantis’ astonishing camouflage isn’t especially orchid-like.

Nanolobes accidentally discovered, could revolutionize a lot of tech. Mind-controlled prosthetic arms that work in daily life are now a reality. How to Gird Up Your Loins: An Illustrated Guide.