New Solar Panels Made with More Common Metals Could Be Cheaper and More Sustainable. EMBARGOED FOR RELEASE: Tuesday, Aug. 21, 2012, 9 a.m. 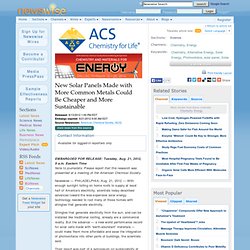 Eastern TimeNote to journalists: Please report that this research was presented at a meeting of the American Chemical Society. Newswise — PHILADELPHIA, Aug. 21, 2012 — With enough sunlight falling on home roofs to supply at least half of America’s electricity, scientists today described advances toward the less-expensive solar energy technology needed to roof many of those homes with shingles that generate electricity. Shingles that generate electricity from the sun, and can be installed like traditional roofing, already are a commercial reality.

But the advance ― a new world performance record for solar cells made with “earth-abundant” materials ― could make them more affordable and ease the integration of photovoltaics into other parts of buildings, the scientists said. V3Solar's Spinning Cone-Shaped Solar Cells Generate 20 Times More Electricity Than Flat Photovoltaics. If there's one constant among the vast majority of solar panel designs, it's flatness; while solar panels can be equipped to tilt to follow the sun's path through the course of the day, there are still significant efficiency limitations to this basic design. 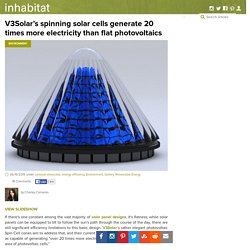 V3Solar's rather elegant photovoltaic Spin Cell cones aim to address that, and their current prototype was recently third-party verified as capable of generating "over 20 times more electricity than a static flat panel with the same area of photovoltaic cells. " The V3 Spin Cell was developed through collaboration with industrial design team Nectar Design. IBM Solar Collector Magnifies Sun By 2000X – These Could Provide Power To The Entire Planet. A team at IBM recently developed what they call a High Concentration Photo Voltaic Thermal (HCPVT) system that is capable of concentrating the power of 2,000 suns, they are even claiming to be able to concentrate energy safely up to 5,000X, that’s huge. 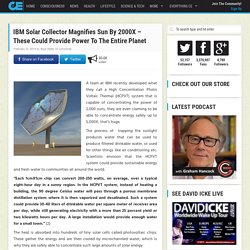 The process of trapping the sunlight produces water that can be used to produce filtered drinkable water, or used for other things like air conditioning etc. Scientists envision that the HCPVT system could provide sustainable energy and fresh water to communities all around the world. “Each 1cmX1cm chip can convert 200-250 watts, on average, over a typical eight-hour day in a sunny region. Photoflow is solar power and rainwater harvesting in one. A design company called NOS has developed a solution to two major problems facing developing countries: scarcity of drinking water and electricity. 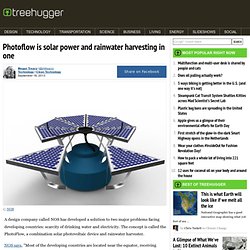 The concept is called the PhotoFlow, a combination solar photovoltaic device and rainwater harvester. NOS says, "Most of the developing countries are located near the equator, receiving more sunlight and rainfall than most other countries on the planet. Despite this abundance, a large number of people living in these countries suffer from a lack of electricity and potable drinking water.

ONYX Service & Solutions Inc. Novel Electronics Could Speed Adoption of Solar Power. A new design for inverters invented by Ideal Power Converters, in Spicewood, Texas, could significantly lower the cost of solar power and make it practical in more places. 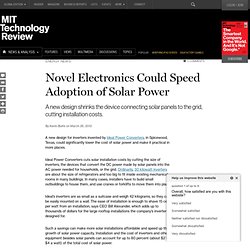 Ideal Power Converters cuts solar installation costs by cutting the size of inverters, the devices that convert the DC power made by solar panels into the AC power needed for households, or the grid. Ordinarily, 30 kilowatt inverters are about the size of refrigerators and too big to fit inside existing mechanical rooms in many buildings. In many cases, installers have to build small outbuildings to house them, and use cranes or forklifts to move them into place.

Ideal’s inverters are as small as a suitcase and weigh 42 kilograms, so they can be easily mounted on a wall. Solar Shingles Made from Common Metals Offer Cheaper Energy Option. These Solar Roads Could Power The Entire Country. There are nearly 18,000 square miles of roads in the U.S., an area that’s bigger than the entire states of New Hampshire and Massachusetts combined. 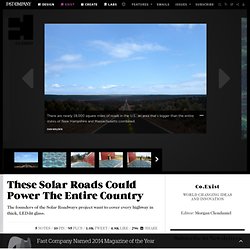 By some estimates, there are also as many as 2 billion parking spaces. Since most of that pavement is soaking up sun all day long, a couple of entrepreneurs had an idea: Why not put it to use generating solar power? The Solar Roadways project, now crowdfunding on Indiegogo, hopes to re-pave the country in custom, glass-covered solar panels that are strong enough to drive on while generating enough power to light the road, melt ice and snow, and send extra energy to cities. 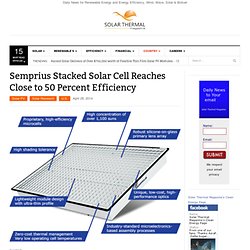 In this effort, Semprius worked in collaboration with Professor John Rogers and his team at the Frederick Seitz Materials Research Laboratory at the University of Illinois at Urbana-Champaign and researchers at Solar Junction, a leading III-V high-efficiency solar cell manufacturer and important Semprius partner. The results of this project will be published this week in the journal Nature Materials. As solar panels boom, it was the simple business model that the big energy players missed. Solar panels are now remaking the energy equation in the U.S. and breaking records for installations every quarter: There were more solar panels installed in the U.S. over the last 18 months than the last 30 years. 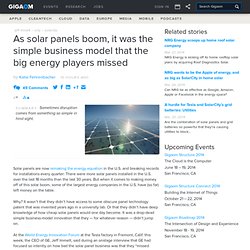 But when it comes to making money off of this solar boom, some of the largest energy companies in the U.S. have (so far) left money on the table. Why? It wasn’t that they didn’t have access to some obscure panel technology patent that was invented years ago in a university lab. Or that they didn’t have deep knowledge of how cheap solar panels would one day become. It was a drop-dead simple business-model innovation that they — for whatever reason — didn’t jump on. A Solar System Is Installed in the US Every 4 Minutes. A lot happens in America every four minutes. 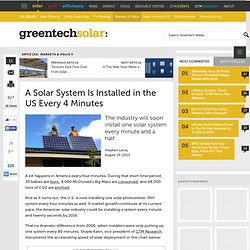 During that short time period, 30 babies are born, 4,080 McDonald's Big Macs are consumed, and 48,000 tons of CO2 are emitted. And as it turns out, the U.S. is now installing one solar photovoltaic (PV) system every four minutes as well. If market growth continues at its current pace, the American solar industry could be installing a system every minute and twenty seconds by 2016. That's a dramatic difference from 2006, when installers were only putting up one system every 80 minutes. Australia's Largest Solar Cell Printer Can Spit Out a Photovoltaic Panel Every Two Seconds. An incredible new printer at the University of Melbourne has allowed researchers to print solar cells up to the size of an A3 sheet of paper. Developed in collaboration between the Victorian Organic Solar Cell Consortium (VICOSC), CSIRO , and the University of Melbourne, the solar cell printer makes renewable energy even easier to source.

The solar cell printer can transform plastic or metal into photovoltaic panels ranging from the size of a fingernail up to an A3 sheet of paper. CSIRO’s Dr. Scott Watkins foresees these cells being used on rooftops, glass surfaces, or even personal devices like laptops. In just three years, the researchers behind the printer have been able to increase the output size from just 2 centimeters to 30 centimeters wide. Researchers ID Thousands of Organic Materials for Use in Solar Cells.

Using donated computing power and drawing on the theory of quantum mechanics, Harvard researchers have computationally screened 2.3 million organic molecules for properties relevant to photovoltaic applications and then organized them into a searchable, sortable database. 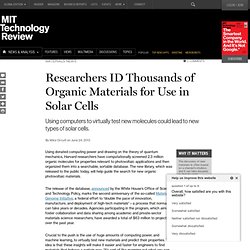