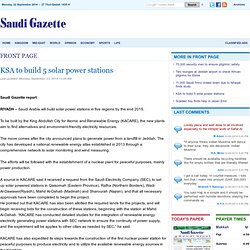 To be built by the King Abdullah City for Atomic and Renewable Energy (KACARE), the new plants aim to find alternatives and environment-friendly electricity resources. The move comes after the city announced plans to generate power from a landfill in Jeddah. The city has developed a national renewable energy atlas established in 2013 through a comprehensive network to solar monitoring and wind measuring. Remembering The End Of The World.

Description: Comparative mythologist David Talbott has devoted much of his life to identifying the "archetypes" or common mythic themes of cultures around the world. 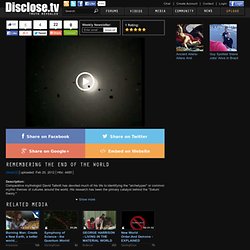 His research has been the primary catalyst behind the "Saturn theory. " FAIR USE NOTICE: The material on this channel is provided solely for educational and informational purposes. It may contain copyrighted material, the use of which has not been specifically authorized by the copyright owner. Infringement of copyright is not intended. This site may contain copyrighted material whose use has not always been specifically authorized by the copyright owner. Previous MediaNext Media. Ancient Aliens The Black Knight, A 13000 Year Old Alien Satellite? The black knight. 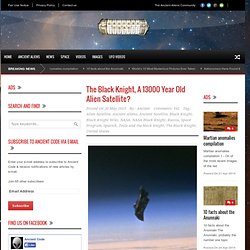 Credit Space Junk or Extraterrestrial “Satellite”, the black knight as it’s called today– has been around for quite some time now. Dwarf planet discovery hints at a hidden Super Earth in solar system. Astronomers have increased the size of the observable solar system after spotting a 450-km wide object orbiting the sun. 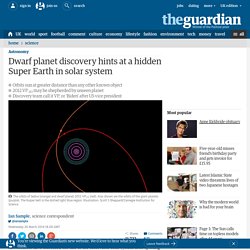 The lump of ice and rock circles the sun at a greater distance than any known object, and never gets closer than 12bn kilometres – 80 times the distance from Earth to the sun. If its size is confirmed it could qualify as a dwarf planet in the same category as Pluto. Researchers said the discovery proves the existence of the inner Oort cloud, a region of icy bodies that lies far beyond the orbit of Neptune – which at 4.5bn kilometres from the sun is the most remote planet in the solar system.

Until a proper name is decided upon, the body is known only as 2012 VP113. According to the science journal Nature, the team that discovered it call it VP for short, or "Biden", after US vice president Joe Biden. Point by Point: Electric Universe Theory. Alien-seeking space observatory to hover between Earth and sun. The search for alien worlds has received an unprecedented burst of energy, with the European Space Agency's (ESA) vote this week to fund a 34-telescope observatory that will scan the sky for habitable planets, from a fixed spot between Earth and the sun. 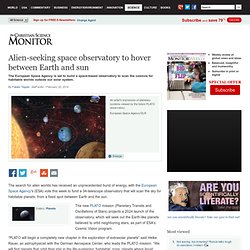 Skip to next paragraph Subscribe Today to the Monitor Click Here for your FREE 30 DAYS ofThe Christian Science MonitorWeekly Digital Edition The new PLATO mission (Planetary Transits and Oscillations of Stars) projects a 2024 launch of the observatory, which will seek out the Earth-like planets believed to orbit neighboring stars, as part of ESA's Cosmic Vision program. “PLATO will begin a completely new chapter in the exploration of extrasolar planets” said Heike Rauer, an astrophysicist with the German Aerospace Center, who leads the PLATO mission. In the past 20 years, search missions run by both ESA and NASA have located over 1,000 exoplanets orbiting alien suns. PLATO is one of three Cosmic Vision projects now underway. IBEX—Plasma Ribbon Confirms Electric Sun. 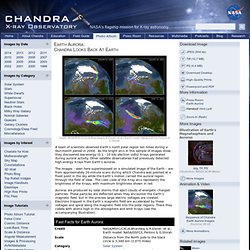 As the bright arcs in this sample of images show, they discovered low-energy (0.1 - 10 kilo electron volts) X-rays generated during auroral activity. Other satellite observatories had previously detected high-energy X-rays from Earth’s auroras. Ceres, Vista are visible in our night sky right now. By Alan Hale For the Daily News Posted: 02/20/2014 09:21:59 PM MST. 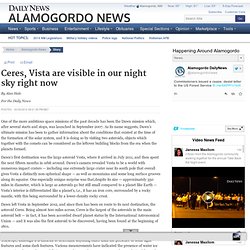 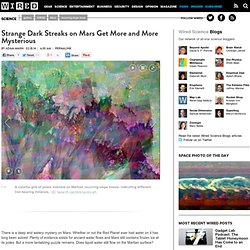 There is a deep and watery mystery on Mars. Since 2011, NASA’s Mars Reconnaissance Orbiter (MRO) has been taking pictures of mysterious dark features that appear during warm seasons, flow downhill, and then vanish as the weather grows colder. Does Earth have a second moon? Many planets in our solar system have more than one moon. 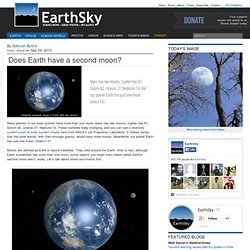 Mars has two moons, Jupiter has 67, Saturn 62, Uranus 27, Neptune 14. Those numbers keep changing, and you can see a relatively current count of solar system moons here from NASA’s Jet Propulsion Laboratory. It makes sense that the outer worlds, with their stronger gravity, would have more moons. Meanwhile, our planet Earth has just one moon. Doesn’t it? Moons are defined as Earth’s natural satellites. Image of Earth with two moons, generated in Celestia software, by Grebenkov in Wikimedia Commons. 3753 Cruithne in 2001.

Quasi-satellites are not second moons for Earth. Are We Living in a Black Hole? Let's rewind the clock. 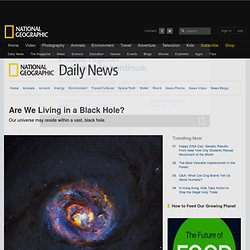 Before humans existed, before Earth formed, before the sun ignited, before galaxies arose, before light could even shine, there was the Big Bang. This happened 13.8 billion years ago. But what about before that? Many physicists say there is no before that. 200 Years Of Scorchitude: Professor Warns California To Brace For A "Mega-Drought" Huge asteroid to pass by Earth nearly one year after Chelyabinsk meteorite. Black holes do not exist as we thought they did. On January 24, the journal Nature published an article entitled "There are no black holes. " It doesn't take much to spark controversy in the world of physics... But what does this really mean? In a brief article published on arXiv, a scientific preprint server, Stephen Hawking proposed a theory of black holes that could reconcile the principles of general relativity and quantum physics. To better understand Hawking's remarks, Forum interviewed Robert Lamontagne, an astrophysicist at the Department of Physics, Université de Montréal, and Executive Director of the Observatoire du Mont-Mégantic.

What is a black hole? "According to Einstein's theory of general relativity, a black hole is kind of cosmic central vacuum cleaner that swallows everything in its reach and lets nothing escape. Wal Thornhill: Voyager 1 Confirms Electric Heliosphere. Southwest Research Institute (SwRI) 2014 News Release - IBEX research shows the influence of the galactic magnetic field extends well beyond our solar system.