The Future is Clear. SunJack Solar Charger - Portable Energy Independence by Harold Tan. I love solar because it aligns with my personal values of efficiency and independence. 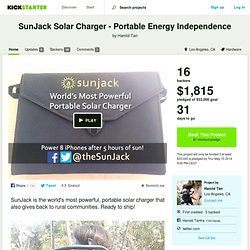 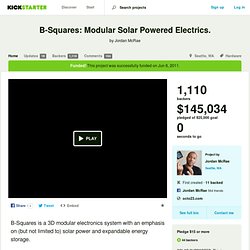 Thanks for visiting our project page and helping take B-Squares from prototype to product. This project started on January 26, 2011 with a quick sketch while both myself and Shawn were trying to prototype another solar product. We were getting frustrated that it was so difficult to integrate solar energy into our professional and for-fun ‘electric graffiti’ projects. So, after three months of intense development, with B-Squares we now think we have a technology that can bring solar, energy storage, and interactivity into a range of projects, instantly. And we need your help to complete the journey. Solar Powered Cubes Phase 2 by Clifford Short. In Phase 1 of the Cubes project, we were aiming toward a small Cube to power small cabins or homes. 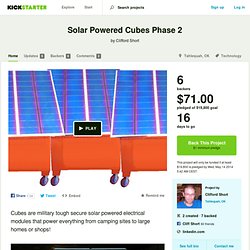 Phase 2 is bigger and better. The Cube System in Phase 2 will power homes or shops with larger electrical needs. Decades ago, I was looking into alternative energy sources that could compete with utility companies for providing electric. Back then, there were no tax incentives, nor were solar products even close to being reasonably priced. Today is a whole different and wonderful story! Our "Cube" does not install onto your house, nor is it a permanent structure on your property. To get started, we built the above pictured scaled down working prototype to prove the conceptual design and functionality of our main focus project, the "Cube".

A few outstanding features of the Cube system design: I am consulting with a 30 year experience new product engineer, and good friend, Mike Lawless. FAQ from Phase 1 of the Cube Project: Open Source Programmable Solar BMS Li-ion, LiFePO4 dev board by Dacian Todea. This Battery Management System development board is designed to work with any type of rechargeable Lithium batteries and supercapacitors thanks to fully user programmable parameters. 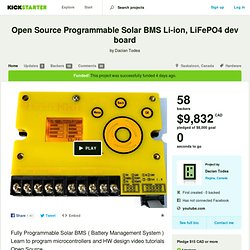 Whenever you need to use a rechargeable lithium battery you will also require a BMS. Most small device have them integrated like the battery from your laptop, cellphone or cordless power tools (if they use Lithium). Same is true for supercapacitors (EDLC). See my detailed video about the current beta sample. I use hybrid supercapacitors in my tests as you can see the beta sample demonstration video. Inergy - Revolutionary Solar Generators by Inergy. After several years in the whole home solar business we uncovered a common thread: our customers wanted smaller, less expensive, mobile solar systems. 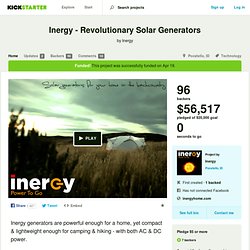 It was clear there was a need that hadn't been met - so we listened. Simply put, a solar generator is a smaller version of a home solar system with an onboard battery pack. These robust batteries enable the energy generated by the solar panels to be stored in vast amounts, allowing you to power everything from a laptop to a home refrigerator even without the sun. Our generators range in output from 100 Wh (watt/hours) to 3,000 Wh - and accomplish this with ultra-lightweight Lithium-ion batteries and an incredibly compact design. The end result is the most portable, lightweight, and potent power sources on the market today...all while being renewable. Solar power provides numerous benefits not seen by traditional gas powered generators. Never run out of fuel again. The Solar Pocket Factory: an Invention Adventure by Alex Hornstein. Kickstarter, there's been a tremendous response so far. 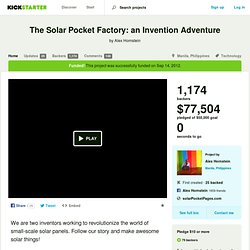 Now, we want to take this to the next level! If we can raise $100k, we'll redesign the expensive CNC laser cutter in the Pocket Factory and release the designs under an open-source license for anyone to use and build upon. 35 Solar - Next Generation Photovoltaics by Kramer Winingham & Leon Viveros. Solar power solutions have been promised for decades and failed to meet the hype. 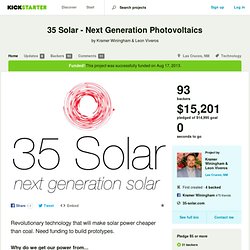 In 2012, only one percent of renewable energy was solar - and only 12 percent of power in the United State was renewable. We can do better than that. The key to increasing solar's role in our economy is reducing its cost. That's the only way solar can make our energy mix more sustainable. We have found the key. Clean Solar Cooking for India. Clean solar cooking... because "cooking shouldn't kill"*. 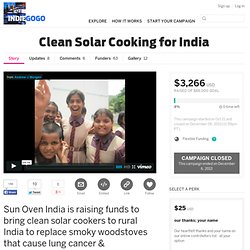 My name is Ricca Slone. I teach public policy in Chicago, but in 2011-2012 I taught English at a rural school in Orissa state in eastern India. Watching the Indian women collect and carry fuelwood, and cook over smoky open stoves, made me want to help them find a safer way to feed their families. Millions of women collecting firewood every day for cooking fuel causes severe deforestation. Solar Liberator. World's first fully integrated smart solar power appliance. 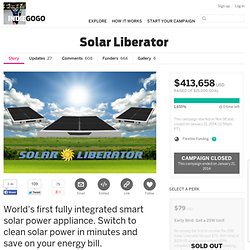 Switch to clean solar power in minutes and save on your energy bill. Solar Liberator dramatically reduces the complexity and cost of solar power. With an inverter, smart battery and control electronics packaged into an easy to use appliance, it requires no further setup. Solar Liberator comes in 500W, 100W and 25W variants. An out-of-the-box solution that makes switching to solar power unbelievably easy with the lowest possible up-front cost.The grid-tie capable 500W unit can be easily chained in to arrays of any capacity. Unlike most other energy sources, Solar does not cause any deforestation, water pollution, wildlife habitat destruction, ocean & rain acidification etc. Apollon Project: The residential solar power plant by Apollon Team. We’re developing a residential solar power plant based on thermal energy. 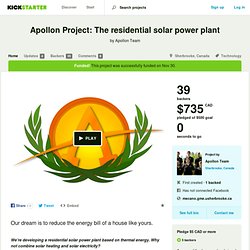 Why not combine solar heating and solar electricity? Each second, the surface of the earth receives more energy from the sun than we consume annually throughout the world. A commercial collector is installed on the ground near the house. Reflective surfaces concentrate the rays of the sun on a tube in order to heat oil to a temperature of 400 °F. Hot oil then circulates into Apollon where heat is able to produce a high pressure and high temperature gas. We agree that the most economical way to use the sun’s energy is to use it for active and passive heating of air and water. The bright future of solar thermal powered factories. Picture: ARUN. The missing element in our sustainable energy strategy is a renewable source of heat energy A large share of energy consumed worldwide is by heat.

Cooking, space heating and water heating dominate domestic energy consumption. In the UK, these activities account for 85 percent of domestic energy use, in Europe for 89 percent and in the USA for 61 percent (excluding cooking). Heat also dominates industrial energy consumption. CTRL+P: Printing Australia’s largest solar cells. Scientists have produced the largest flexible, plastic solar cells in Australia – 10 times the size of what they were previously able to – thanks to a new solar cell printer that has been installed at CSIRO. The printer has allowed researchers from the Victorian Organic Solar Cell Consortium (VICOSC) – a collaboration between CSIRO, The University of Melbourne, Monash University and industry partners – to print organic photovoltaic cells the size of an A3 sheet of paper.

According to CSIRO materials scientist Dr Scott Watkins, printing cells on such a large scale opens up a huge range of possibilities for pilot applications. "There are so many things we can do with cells this size," he says. "We can set them into advertising signage, powering lights and other interactive elements. We can even embed them into laptop cases to provide backup power for the machine inside. " The new printer, worth A$200,000, is a big step up for the VICOSC team. Dr David Jones, VICOSC project coordinator.