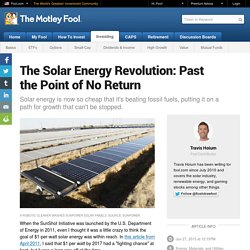 Source: SunPower. When the SunShot Initiative was launched by the U.S. Department of Energy in 2011, even I thought it was a little crazy to think the goal of $1-per-watt solar energy was within reach. In this article from April 2011, I said that $1 per watt by 2017 had a "fighting chance" at best, but it was a long way off at the time. Last weekend, First Solar's (NASDAQ:FSLR) CEO Jim Hughes said that $1 per watt is not only on the horizon, but is less than two years away. Past the point of no return The progress in reducing the cost of solar energy shouldn't be lost on anyone. According to GTM Research, the cost of utility-scale solar projects has fallen 67% in the past five years; $1 per watt would be another 44% in the next couple of years. 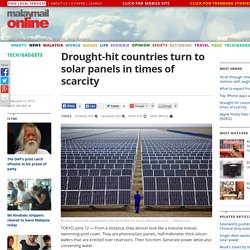 They are photovoltaic panels, half-millimeter thick silicon wafers that are erected over reservoirs. Their function: Generate power while also conserving water. For years, the technology was just a niche product. Now, with drought concerns growing in many places across the planet, it’s showing signs of taking off. In parched parts of California and Australia, as well as in Japan, where cramped living conditions put land at a premium, the panels can increasingly be seen dotting the water. While still representing less than 1 per cent of the power generated by all solar installations today, up from about zero a few years ago, Infratech anticipates much more growth in demand for the floating panels — on reservoirs and even above hydro dams — as global temperatures rise. 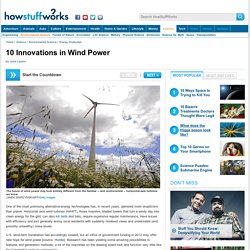 In this case, though, the turbine keeps its horizontal axis, like you see on most land-based structures; the big development here is a support system called WindFloat. WindFloat is a semi-submersible platform held in place by a drag-embedment anchor. In drag embedment, there's no construction at the seafloor. Instead, an anchor is dragged along the floor until it embeds itself at the desired depth. SolarLeaf – bioreactor façade. First façade system in the world to cultivate micro-algae to generate heat and biomass as renewable energy sources. 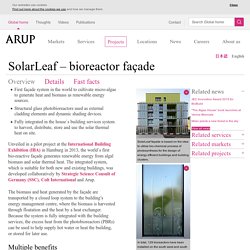 Structural glass photobioreactors used as external cladding elements and dynamic shading devices. Fully integrated in the house´s building services system to harvest, distribute, store and use the solar thermal heat on site. Unveiled in a pilot project at the International Building Exhibition (IBA) in Hamburg in 2013, the world´s first bio-reactive façade generates renewable energy from algal biomass and solar thermal heat. The integrated system, which is suitable for both new and existing buildings, was developed collaboratively by Strategic Science Consult of Germany (SSC), Colt International and Arup. The biomass and heat generated by the façade are transported by a closed loop system to the building’s energy management centre, where the biomass is harvested through floatation and the heat by a heat exchanger. 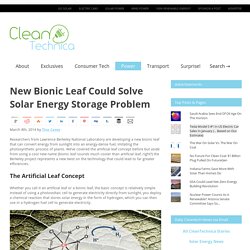 We’ve covered the artificial leaf concept before but aside from using a cool new name (bionic leaf sounds much cooler than artificial leaf, right?) The Berkeley project represents a new twist on the technology that could lead to far greater efficiencies. The Artificial Leaf Concept Whether you call it an artificial leaf or a bionic leaf, the basic concept is relatively simple. Bionic leaf courtesy of Berkeley Lab. That sunlight-to-hydrogen chain means you can store solar energy indefinitely, potentially in huge quantities, so think of it as a kind of battery and you’re on the right track. 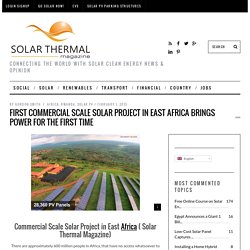 This project in the youth village of Agahozo-Shalom in Rwanda changed all that for more than 15,000 households. This was one of the first commercial scale solar projects in East Africa and upon completion increased the small countries generation capacity by 6 % all by itself. Here are the specifics of the project and a video from Gigawatt Global. – 12 month project – 350 local jobs created for the duration of the project construction – 8.5 megawatt of electricity generation capacity – 28,360 solar panels The overall goal of Gigawatt Global for Africa is to install 1000 Megawatts of solar power by 2020. About Gordon Smith Gordon's expertise in the area of industrial energy efficiency and alternative energy. Martha sur Twitter : "#solargaza donate to get electricity restored in Gaza Solar Power on. DONATE NOW - solargaza. DIY Solar Panels. DIY 1000 watt wind turbine. 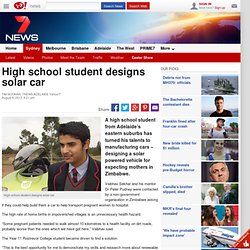 Vaibhav Sekhar and his mentor Dr Peter Pudney were contacted by a non-government organisation in Zimbabwe asking if they could help build them a car to help transport pregnant women to hospital. The high rate of home births in impoverished villages is an unnecessary health hazard. “Some pregnant patients needed to walk almost 10 kilometres to a health facility on dirt roads, probably worse than the ones which we have got here,” Vaibhav said. The Year 11 Rostrevor College student became driven to find a solution. “This is the best opportunity for me to demonstrate my skills and research more about renewable energy,” he said.

With the help of his mentor from UniSA, he conceived a low-maintenance, solar powered three-seater vehicle suitable for tough terrain. And Vaibhav’s work is appreciated at school too.