Saule Technologies – Solar Cells Reimagined. Scientists Develop Liquid Fuel That Can Store The Sun's Energy For Up to 18 Years. No matter how abundant or renewable, solar power has a thorn in its side. There is still no cheap and efficient long-term storage for the energy that it generates. The solar industry has been snagged on this branch for a while, but in the past year alone, a series of four papers has ushered in an intriguing new solution. Scientists in Sweden have developed a specialised fluid, called a solar thermal fuel, that can store energy from the sun for well over a decade. "A solar thermal fuel is like a rechargeable battery, but instead of electricity, you put sunlight in and get heat out, triggered on demand," Jeffrey Grossman, an engineer works with these materials at MIT explained to NBC News.

The fluid is actually a molecule in liquid form that scientists from Chalmers University of Technology, Sweden have been working on improving for over a year. Community solar: An unlikely utility savior? It’s no mystery that utility animosity for rooftop solar is as deeply entrenched as the animosity consumers often have toward their utilities. 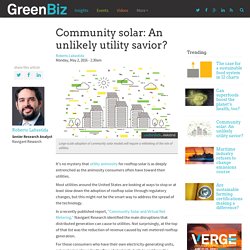 Most utilities around the United States are looking at ways to stop or at least slow down the adoption of rooftop solar through regulatory changes, but this might not be the smart way to address the spread of the technology. In a recently published report, "Community Solar and Virtual Net Metering," Navigant Research identified the main disruptions that distributed generation can cause to utilities. Not surprisingly, at the top of that list was the reduction of revenue caused by net-metered rooftop generation. For those consumers who have their own electricity-generating units, net metering allows for the flow of electricity both to and from the customer through a single meter. But while utilities might have a valid argument, they are also pushing themselves further away from their main asset — their customers. Sun setting on Eskom's monopoly. Eskom may be in a shambles and electricity prices are likely to skyrocket, but for some domestic consumers solar power is saving them thousands of rands – and the planet thousands of kilograms of carbon – each month. 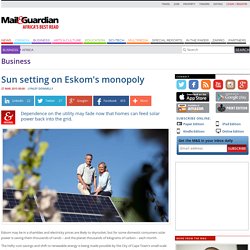 The hefty cost savings and shift to renewable energy is being made possible by the City of Cape Town’s small-scale embedded generation programme (SSEG), which was launched late last year. It allows residents and commercial users, with installations such as solar photovoltaic (PV) systems or small wind turbines, to sell power back to the grid. But municipalities have traditionally relied on electricity revenues to subsidise their other services and the potential loss of revenue has been a major hurdle, which has prevented many local governments from implementing similar projects, even though it would reduce stress on the grid and help them to go green.

Renewable energy specialists believe the old model is not sustainable. Why solar is booming in Latin America. Solar developers have flocked to the hot, barren lands of northern Chile to take advantage of some of the best natural conditions for solar in the world. 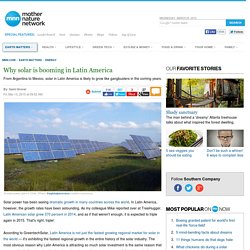 The high horizontal solar radiation in areas in and around the Atacama Desert make solar technologies more productive in these regions, translating into lower costs per unit of electricity generated. But while it's fairly obvious that lots of sun translates into lots of solar, there are many other factors involved too. Here are just a few: Reliance on diesel & old coal In countries with relatively mature grid infrastructure, solar often ends up competing with cheap, efficient natural gas and/or modern coal and nuclear plants. In many Latin American countries, however, solar is often replacing either expensive and dirty diesel generation and/or older (or not yet built!) Bacteria Soon to Grow Photovoltaic Cells? One of the major drawbacks of solar power generation remains the high cost of raw materials needed to manufacture photovoltaic cells. 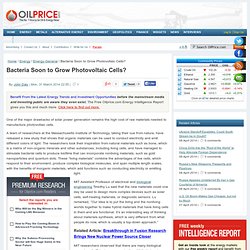 A team of researchers at the Massachusetts Institute of Technology, taking their cue from nature, have released a new study that shows that organic materials can be used to conduct electricity and emit different colors of light. The researchers took their inspiration from natural materials such as bone, which is a matrix of non-organic minerals and other substances, including living cells, and have managed to stimulate bacterial cells to produce biofilms that can incorporate nonliving materials, such as gold nanoparticles and quantum dots. These “living materials” combine the advantages of live cells, which respond to their environment, produce complex biological molecules, and span multiple length scales, with the benefits of inorganic materials, which add functions such as conducting electricity or emitting light. Artificial Forest for Solar Water-Splitting. The Most Efficient Energy Under The Sun.

New connection between stacked solar cells can handle energy of 70,000 suns. V3Solar Spin Cell. Clean Power Published on January 24th, 2013 | by Zachary Shahan Quite frankly, if the company’s numbers are correct, this could be some big solar news. 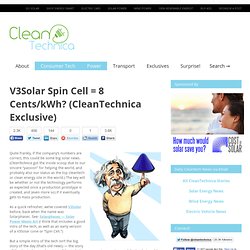 (CleanTechnica got the inside scoop due to our sincere “passion” for helping the world, and probably also our status as the top cleantech or clean energy site in the world.) The key will be whether or not the technology performs as expected once a production prototype is created, and (even more so) if it eventually gets to mass production. As a quick refresher, we’ve covered V3Solar before, back when the name was Solarphasec. The Future of Power: The Low-Tech Solution To Our High-Energy Problem. Google pumps $12M into African solar energy project. Scientists build the first all-carbon solar cell. By Mark Shwartz Mark Shwartz. 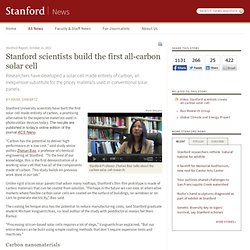 SolarFlower.org. SolarFlower.org. The SolarFlower Forum. Princeton’s nanomesh nearly triples solar cell efficiency. There is huge potential in solar power. The sun is a giant ball of burning hydrogen in the sky, and it’s going to be sticking around for at least a few more billion years. For all intents and purposes, it’s a free source of energy. Sadly, humanity hasn’t been very good at harnessing its power directly. Our current methods of capturing the sun’s energy are very inefficient. For example, modern silicon and indium-tin-oxide-based solar cells are approaching the theoretical limit of 33.7% efficiency. Led by Stephen Chou, the team has made two dramatic improvements: reducing reflectivity, and more effectively capturing the light that isn’t reflected.

PlaCSH is also capable of capturing a large amount of sunlight even when the sunlight is dispersed on cloudy days, which results in an amazing 81% increase in efficiency under indirect lighting conditions when compared to conventional organic solar cell technology. Most Solar Panels Facing the Wrong Way, Experts Say. _solar architecture lab. Calculation of sun’s position in the sky for each location on the earth at any time of day. Home > Solar tools > Sun Position Back to top Content | Data + Map | Chart Polar | Chart Cartesian | Table | Annual sun path | 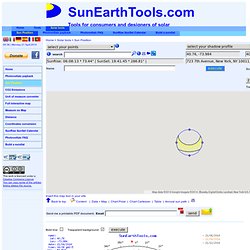