“In retrospect, I should have slowed down and said I did meet one Russian official a couple times, and that would be the ambassador.”
—J.Sessions, March 7, 2017

Sessions met with top Russian official twice. Sessions did not mention either meeting during his confirmation hearings when he said he knew of no contacts between Trump surrogates and Russians. 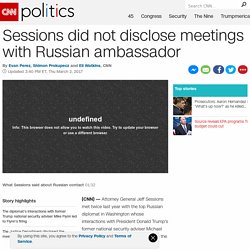 A Justice official said Sessions didn't mislead senators during his confirmation. The revelation prompted key Democrats to call for Sessions' resignation, including Senate Minority Leader Chuck Schumer and House Minority Leader Nancy Pelosi. "Last night when I read the revelations ... and his decision to mislead Congress without those contacts, I felt a knot in the pit of my stomach," Schumer told reporters Thursday. "The information reported last night makes it clear, beyond the shadow of a doubt, that Attorney General Sessions cannot possibly lead an investigation ... with these revelations, he may very well become the subject of it. " Several Republicans also called on Sessions to recuse himself from Trump-Russia inquiries.

Rep. House Majority Leader Rep. Meanwhile, Sen. Sessions recuses himself from Russia inquiry amid calls for resignation. Jeff Sessions announced that he would recuse himself from investigations into Russian interference in the 2016 election, after a day of drama surrounding two undisclosed meetings he held with the Russian ambassador last year. 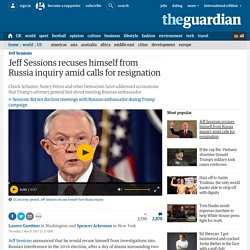 Speaking at a press conference on Thursday amid mounting calls for his resignation, the attorney general said he made the decision after meeting with senior department officials. He said he would not participate in any investigations “related in any way to the campaign for president of the United States”. Sessions met with Russian envoy twice last year, encounters he later did not disclose. Then-Sen. 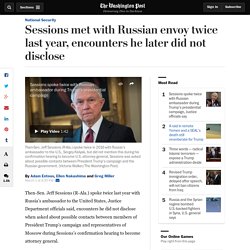 Secret CIA assessment says Russia was trying to help Trump win White House. The CIA has concluded in a secret assessment that Russia intervened in the 2016 election to help Donald Trump win the presidency, rather than just to undermine confidence in the U.S. electoral system, according to officials briefed on the matter. 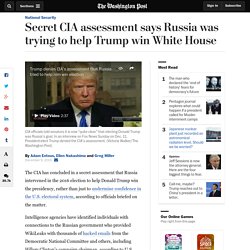 Intelligence agencies have identified individuals with connections to the Russian government who provided WikiLeaks with thousands of hacked emails from the Democratic National Committee and others, including Hillary Clinton’s campaign chairman, according to U.S. officials. Those officials described the individuals as actors known to the intelligence community and part of a wider Russian operation to boost Trump and hurt Clinton’s chances. “It is the assessment of the intelligence community that Russia’s goal here was to favor one candidate over the other, to help Trump get elected,” said a senior U.S. official briefed on an intelligence presentation made to U.S. senators.

Russian Ambassador Sergey Kislyak is Moscow’s low-key man in Washington. There are many hard jobs in the world of diplomacy, but perhaps none is harder right now than that of Russia’s ambassador to Washington. 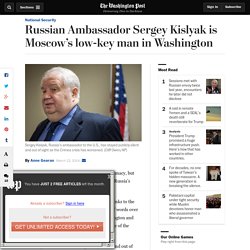 Sergey Kislyak is one of Russia’s most direct links to the Obama administration at a time when a war of words over Crimea has plunged relations between Washington and Moscow to their lowest point since the collapse of the Soviet Union. But Kislyak, 63, has remained publicly silent and out of sight over the past two weeks as the crisis has worsened. world national-security Dallas shooting updates News and analysis on the deadliest day for police since 9/11. post_newsletter353 follow-dallas true after3th false Checkpoint newsletter Military, defense and security at home and abroad.

Please provide a valid email address. No round of television appearances hotly defending Russia’s interests. The Russian Embassy did not respond to e-mails and phone calls requesting an interview or comment for this story. FBI and CIA give differing accounts to lawmakers on Russia’s motives in 2016 hacks. CIA briefers told senators in a closed-door briefing it was now “quite clear” that electing Trump was Russia’s goal, according to officials. 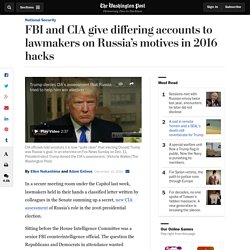 (Victoria Walker/The Washington Post) CIA officials told senators it is now “quite clear” that electing Donald Trump was Russia’s goal. In an interview on Fox News Sunday on Dec. 11, President-elect Trump denied the CIA's assessment. CIA briefers told senators in a closed-door briefing it was now “quite clear” that electing Trump was Russia’s goal, according to officials. (Victoria Walker/The Washington Post) In a secure meeting room under the Capitol last week, lawmakers held in their hands a classified letter written by colleagues in the Senate summing up a secret, new CIA assessment of Russia’s role in the 2016 presidential election.

Sitting before the House Intelligence Committee was a senior FBI counterintelligence official. Transcript of Sessions’s recusal news conference, annotated. Attorney General Jeff Sessions told reporters at the Justice Department, March 2, that he was recusing himself from any investigation having to do with President Trump's 2016 campaign. 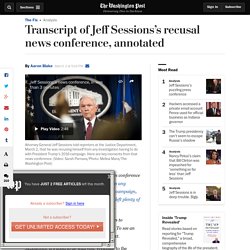