"The investigation has shown, let us hope, privilege at its worst. The trail is one of dishonesty, greed, violation of law, secrecy, concealment, evasion, falsehood, and cunning.

It is a trail of betrayals by trusted and presumably honorable men—betrayals of a government, of certain business interests and the people who trusted and honored them; it is a trail showing a flagrant degree of the exercise of political power and influence, and the power and influence of great wealth upon individuals and political parties; it is the trail of despoilers and schemers, far more dangerous to the well-being of our Nation and our democracy than all those who have been deported from our shores in all time as undesirable citizens. And in the end the story is one of the crushing of brilliant careers when finally the light was played upon those who schemed those unhealthy schemes born in darkness."
—Gerald Nye, February 25, 1928,

Lies to the Senate

Donald Trump Is Choosing His Cabinet. Here’s the Latest List. 12/2/16. Hearings Will Unmask ‘Swamp Creatures’ in Trump’s Cabinet. “We should know what direction this administration is headed in,” Mr. 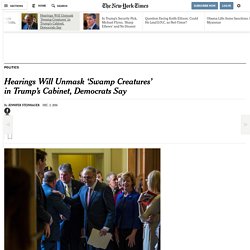 Schumer said. “They didn’t win the election by saying they were going to hire people who want to cut and Medicare. I will also be looking for any ethical transgressions.” Photo For starters, Democrats announced this past week that they would push for a rule requiring all cabinet-level nominees to provide Congress with their tax returns, a move made to suggest that some of Mr. Democrats have themselves to blame for their weakened position in challenging a nominee. “At the end of the day, we were the ones who changed it to 51,” said Senator Claire McCaskill, Democrat of Missouri, who voted for the measure. It is highly unusual for Congress, even in an era of divided government, to outright cabinet nominees.

In one telling move, Senator Susan Collins gave a fast nod to Mr. OPEN Graphic In short, Republicans say, bring it on. But Democratic lawmakers can make the process afflictive. Mr. And for whatever bumps Mr. Mr. Whos in Donald Trumps Cabinet? When President-elect Donald Trump takes the oath of office on Friday, he may have a few members of his Cabinet in place alongside him.

But the bulk of Trump’s nominees—including most of his economic team—won’t be joining him for several days or even weeks. Three days before the inauguration, the Senate has not scheduled a single confirmation vote for Trump’s Cabinet, and none of the president-elect’s picks have even cleared committee approval. Senate Republicans still hope to confirm members of Trump’s national-security team on Friday, and the likeliest to receive votes are retired General James Mattis as defense secretary, retired General John Kelly as homeland security secretary, and Representative Mike Pompeo as CIA director. Elaine Chao, the nominee for transportation secretary, could also win Senate approval on Friday. …It looks as though Trump is assembling the crew for a pirate ship. Donald Trump's Cabinet-in-waiting: What we know so far. The rumor mill is churning out names as Washington watches to see who President-elect Donald Trump will select for to fill his Cabinet. 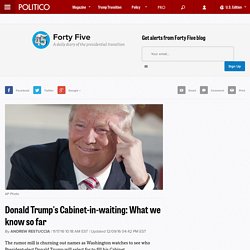 The people Trump picks will not only be tasked with running entire departments, they'll be the best indication of how Trump intends to govern and which of his many (and sometimes contradictory) policy positions he intends to pursue. Here are the picks announced so far for Cabinet and Cabinet-level jobs: Chief of staff Republican National Committee Chairman Reince Priebus will be Trump’s chief of staff. Treasury secretary Steven Mnuchin, a 17-year-veteran of Goldman Sachs, is Trump’s pick for Treasury secretary. 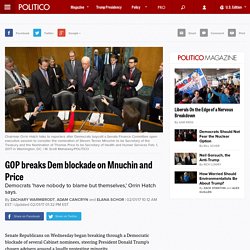 After Democrats boycotted committee votes on Trump's Treasury and health secretary picks for the second straight day, the GOP unilaterally changed the panel's rules to approve both nominees without their votes. Democrats also sat out a committee vote on Trump's Environmental Protection Agency nominee, but Republicans vowed to push past that roadblock as well. Story Continued Below The GOP offensive drew vocal protests from Democrats, and further heightened partisan tensions gripping the Senate as Democrats press for a 60-vote margin to confirm Trump's Supreme Court nominee, Judge Neil Gorsuch.

But while the Democratic rebellion against Treasury nominee Steven Mnuchin, Health and Human Services nominee Rep. "They have nobody to blame but themselves,” Utah Republican Sen.