A Peek Into The Future With 10 Jobs Of 2050. This article originally appeared on Vulcan Post. 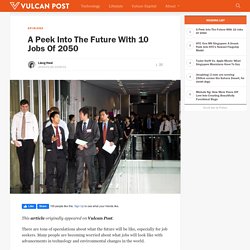 There are tons of speculations about what the future will be like, especially for job seekers. Many people are becoming worried about what jobs will look like with advancements in technology and environmental changes in the world. NTUC Secretary-General (SG) Lim Swee Say has said that anticipating the future of service and embracing new technologies is critical to future business success. With the tight manpower situation in Singapore, this has become more relevant. The Labour Movement in Singapore has announced that they are pulling out all the stops to equip all workers with Future-Ready skills so that businesses can achieve technological and process breakthroughs even with a lean workforce. The Employment and Employability Institute (e2i) intends help incubate businesses with new breakthroughs and ideas, and provide support to facilitate training for workers at every level to gain newer and better skills.

Medical Roboticist. Three ways employers can prepare for the future of work. Download Top 10 Workplace Trends Impacting HR & Facilities. Top 10 Jobs in 2030: Skills You Need Now to Land the Jobs of the Future - Crimson Education. Do you remember what life was like before iPhones? 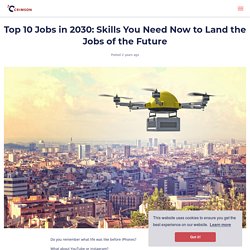 What about YouTube or instagram? By 2025, we’ll lose over five million jobs to automation. However, there will also be a vast array of new jobs available to university graduates - mostly related to knowledge creation and innovation. While advancements in machinery and technology may combine to provide graduates with the tools to explore, experiment and find interesting solutions to complex problems, they will also open up a world of new career opportunities. The 30 best high-paying jobs of the future. Careers of the Future: 42 Professions of Tomorrow - The Startup - Medium. Here are 7 Potentially Interesting Jobs of the Future. "Times they are a-changin'" as Bob Dylan famously said, none less so than the job market of the future. 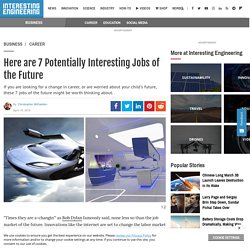 Innovations like the internet are set to change the labor market beyond all recognition in the future. But, just like the Industrial Revolution, newer technologies always make older jobs redundant - especially as automation replaces human beings in many roles. This creative destruction should, however, be embraced rather than feared. It will open up new potential jobs, many we can not even conceive of. Who, for example, could possibly have imagined jobs like software engineers, SEO specialists, etc back in the 1920s or even 1950s? Top jobs in 2040 will involve virtual reality, artificial intelligence & robotics. Emerging technologies such as virtual reality (VR), artificial intelligence (AI) and robotics will strongly influence the careers we do in the future, according to new research from BAE Systems. 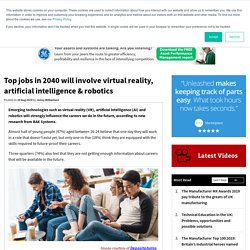 Almost half of young people (47%) aged between 16-24 believe that one day they will work in a role that doesn’t exist yet, but only one-in-five (18%) think they are equipped with the skills required to future-proof their careers. Three-quarters (74%) also feel that they are not getting enough information about careers that will be available in the future. Image courtesy of Depositphotos. 20 common jobs in 2040. German industrial giant, Siemens, recently hosted an Innovation Day that I participated in at their Chicago design center to give thought leaders in the U.S. a first look at many of the cutting edge technologies they’re working on. 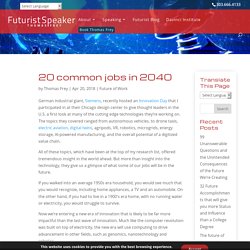 The topics they covered ranged from autonomous vehicles, to drone taxis, electric aviation, digital twins, agripods, VR, robotics, microgrids, energy storage, AI-powered manufacturing, and the overall potential of a digitized value chain. All of these topics, which have been at the top of my research list, offered tremendous insight in the world ahead. But more than insight into the technology, they give us a glimpse of what some of our jobs will be in the future. If you walked into an average 1950s era household, you would see much that you would recognize, including home appliances, a TV and an automobile. On the other hand, if you had to live in a 1900′s era home, with no running water or electricity, you would struggle to survive. 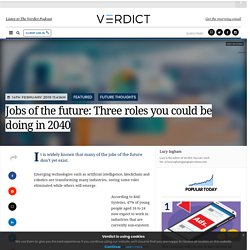 Emerging technologies such as artificial intelligence, blockchain and robotics are transforming many industries, seeing some roles eliminated while others will emerge. According to BAE Systems, 47% of young people aged 16 to 24 now expect to work in industries that are currently non-existent. For many of us, future-proofing our long-term careers will involve significant retraining and skills acquisition. This is something younger people are acutely aware of, with BAE finding that 68% want to ensure that their careers are protected from the changing impact of technology. Report Predicts Top 6 Jobs in 2040. Careers of 2040: jobs of the future, according to BAE Systems - Brite Innovation Review.

Back in February, British aerospace company Orbex unveiled a completely engineered prototype of its Prime rocket at the opening of its new facility in Forres, near Inverness, in the beautiful surroundings of the Scottish Highlands. 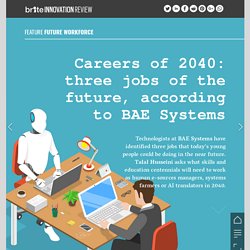 The factory will bring rocket manufacture closer to the proposed UK vertical launch spaceport on the A’Mhoine peninsula in Sutherland on Scotland’s north coast, about an hour and a half by rocket-toting truck; perfect for the polar orbit market Orbex is targeting. Orbex was part of the consortium with Lockheed Martin and Highland and Islands Enterprise (HIE) to bid for the Sutherland spaceport and received £4.5m of the funding when the project moved to the next stage in July 2018. Prime is a second stage rocket, and this first example was built at Orbex’s existing facility in Copenhagen before Forres takes over manufacturing. What skills will be needed for the jobs of 2040? Advances in tech mean young people believe their future jobs do not yet exist, and few believe they have the skills required to future-proof their careers. 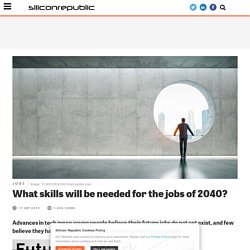 Many young people believe the speed of technological advances means they will one day have a job that does not yet exist, according to new research. A survey of young people in the UK found that almost half (47pc) of 16 to 24-year-olds believe they will work in a role that does not currently exist. Additionally, less than one in five think they have the skills required to future-proof their careers and 68pc said they want to do so by becoming more familiar with emerging technologies that will likely become common in the workplace, such as AI, big data and robotics. What skills would an AI ethicist need? The forecast included roles such as an AI ethicist, who would be responsible for ensuring artificial intelligence was underpinned by robust ethics.

The job market in year 2040 - Data Driven Investor - Medium. As a futurist, I’m often asked about the future of jobs. 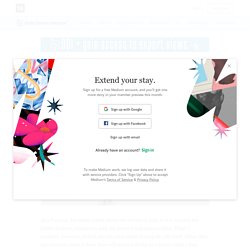 It is a concern for policy-makers, employers and the general population alike. What I realized, however, is that no one cares about losing the job itself. What they are worried about is how they will make a living in a future where they have become obsolete. And yes, the fear of artificial intelligence (AI) is real. The McKinsey Global Institute estimates AI can automate 50% of all paid tasks today.

The speed at which AI is improving is astounding. In fact, developments in AI is so impressive and there is so much money invested by major well-known multinationals right now that most AI experts expect a human-level AI to emerge before the year 2040. What will the top jobs be in 2040? - u&u. A baby is born today. 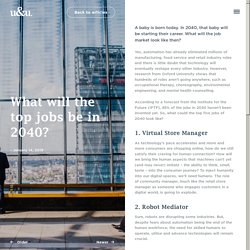 In 2040, that baby will be starting their career. What will the job market look like then? Yes, automation has already eliminated millions of manufacturing, food service and retail industry roles and there is little doubt that technology will eventually reshape every other industry. Best Jobs of the Future: 2020 to 2050. The job market is constantly changing and the changes are coming faster and faster. Today it is very different from your grandparents’ generation. The jobs your grandparents held might not be in demand now. What does this mean for 2020, or even 2050? We know the job market will change even faster as technology advances increases. The 10 surprising jobs that will be huge in 2050. We’re about to lose millions of jobs to automation and robotic replacements. A report, published in September last year, concluded that half of all ‘work tasks’ will be capable of being carried out by machines by 2025. Will humans work in 2050?

Professor Richard Susskind has bad news for your children. “We’re training young people to be good at what machines are already good at,” he says during a discussion with Emma Barnett at FutureFest 2016. In Susskind’s latest book, co-authored with his son, he explores the very real possibility that future experts will lose their jobs to artificial intelligence. So confident in this is he that he thinks thousands of students are driving down a career cul-de-sac without realising it. You might be rolling your eyes at this point, feeling that warnings of robots taking your job are overblown, trite, or both, but Susskind – an expert in law and AI – has a history of being dismissed by peers.

Top 10 Jobs That Will Disappear by 2050. Will jobs exist in 2050? There’s no question that technology is drastically changing the way we work, but what will the job market look like by 2050? Will 40% of roles have been lost to automation – as predicted by Oxford university economists Dr Carl Frey and Dr Michael Osborne – or will there still be jobs even if the nature of work is exceptionally different from today? To address these issues, the Guardian hosted a roundtable discussion, in association with professional services firm Deloitte, which brought together academics, authors and IT business experts. These 7 new jobs will exist by 2050 – including an ‘extinct species revivalist’

Jobs of the future include commercial space pilots, mind-transfer specialists and 3D-printed food engineers. Bringing extinct species back to life and solving the global waste crisis with robotic earthworms is not a far-fetched idea. And students can futureproof their careers with qualifications in science, technology, engineering and mathematics (STEM), says Rebecca Pretorius, country manager for Crimson Education. A report by the World Economic Forum predicts that machines will do more than 50% of all labour globally by 2025. Top 10 Future Careers: 2050 and 2100. In 2001 Glen wrote a blog called Top 10 Future Careers. Now here’s what we’re thinking about future employment.

Making Technology Work for Workers. Globally, the McKinsey Global Institute estimates that by 2030, up to 375 million workers (14% of the workforce) will need to switch occupational categories in order to meet the needs of a shifting labor market. Moreover, all workers will need to adapt – acquiring new knowledge and skills – as their jobs evolve alongside increasingly capable machines. Technical report. What does the future of jobs look like? This is what experts think. What new jobs will exist in 2035? By 2035, workplace changes will see us looking for jobs as remote pilots or online chaperones. 5 things to know about the future of jobs.

This is what work will look like by 2030. Will technology kill jobs and exacerbate inequality, or usher in a utopia of more meaningful work and healthier societies? While it is impossible to know what tomorrow holds, research by global professional services company PwC explores four possible futures – or “worlds” – driven by the “mega trends” of technological breakthroughs, rapid urbanization, ageing populations, shifting global economic power, resource scarcity and climate change.

What the future of work will mean for jobs, skills, and wages: Jobs lost, jobs gained. The future of work: jobs and skills in 2030. Internet and Jobs: What Do Young People Think of the Future of Work? The Future of Work in Tech: Work, Workforce, Workplace - CIO Journal - WSJ. Preparing the healthcare workforce to deliver the digital future: a conundrum that needs to be resolved - Thoughts from the Centre. By Karen Taylor, Director, Centre for Health Solutions. Deloitte CEO on Building Future Workforce. Future of Work. Digital transformation of the workforce white paper. WEF FOW Eight Futures. MERCER 3 alternative visions for the future of work.

Have copied full essay with image, will add to Google Drive. – wendyinfutures