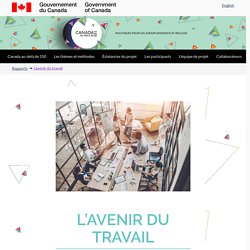 Prochaines étapes Équipe. Future of work. The Future of Work Globalisation, technological progress and demographic change are having a profound impact on OECD labour markets, affecting both the quantity and quality of jobs that are available, as well as how and by whom they are carried out. 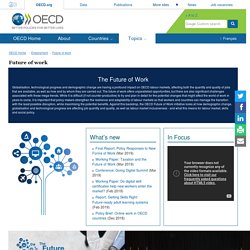 The future of work offers unparalleled opportunities, but there are also significant challenges associated with these mega-trends. While it is difficult (if not counter-productive) to try and plan in detail for the potential changes that might affect the world of work in years to come, it is important that policy makers strengthen the resilience and adaptability of labour markets so that workers and countries can manage the transition with the least possible disruption, while maximising the potential benefits. 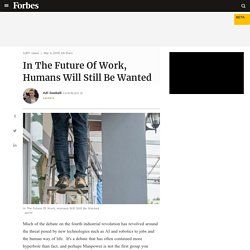 It's a debate that has often contained more hyperbole than fact, and perhaps Manpower is not the first group you would think of to try and add some sense to the debate, but that's what they've tried to do with a recent paper published to coincide with the World Economic Forum shindig in Davos. Lest we forget, Manpower was arguably the forerunner of the gig economy that is so hot today, with the company driving the temporary labor market since its foundation back in 1948. They reveal that yes, employers are investing heavily in automated technology, but that they also appear to be investing heavily in human talent too. Working with machines In another pleasing development, companies seem to be growing their investment in training and development of staff.

Centres des compétences futures. Future of Work. As technology develops at an accelerated pace, cognitive abilities and tasks that were once thought to be reserved for humans are increasingly being carried out by machines, causing growing concern about the impact on jobs and the subsequent risks for government, business and people. 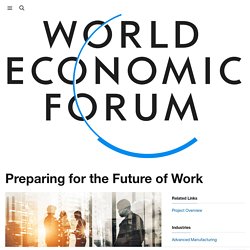 In addition, globalization, demographics, climate change and geopolitical transformations are already making a significant impact on the work landscape. There is a window of opportunity now for individuals, business and government to understand and proactively manage the transition to a new future. The Preparing for the Future of Work Project seeks to bring clarity to an often polarized and ill-informed debate on the future of work through the dissemination of accessible, balanced and sector-specific knowledge as well as the development of actionable insights to help business and governments manage these dramatic shifts. The project is doing this in four ways: 1. 2. 3. 4. What does the future of work look like? Last week, I attended a leadership workshop hosted by MaRS about the future of work. 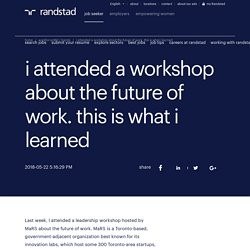 MaRS is a Toronto-based, government-adjacent organization best known for its innovation labs, which host some 300 Toronto-area startups, as well as some big names (like Facebook, Google, Samsung, and CIBC, among others.) All of these organizations come together in the MaRS Discovery District, which unites educators, researchers, scientists, entrepreneurs, and business experts. All of these specialists are interested in driving change in science, technology, government, and other fields.

As a champion of workplace innovation, with a direct line of sight into startup culture, MaRS is well positioned to see where workplaces are headed in the future. Here are some of the insights I took away from the workshop. change is happening faster than ever The timeframe it takes for new innovations to be adopted by the masses is shrinking. Another example: consider how dress codes have shifted in the last decade. Publications.