‘Hurricane amnesia’: Why we might forget the lessons from Hurricane Laura By Kate Yoder on Aug 31, 2020 at 3:59 am. The worst storms loom large in the memory. 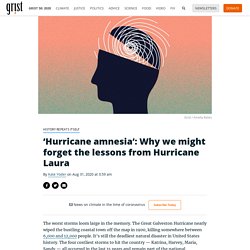 The Great Galveston Hurricane nearly wiped the bustling coastal town off the map in 1900, killing somewhere between 6,000 and 12,000 people. It’s still the deadliest natural disaster in United States history. Disasters are driving a mental health crisis. The only federal program to address it is underfunded. By Dean Russell and Jamie Smith Hopkins, Center for Public Integrity on Aug 30, 2020.

This story was originally published by the Center for Public Integrity and appears here as part of the Climate Desk collaboration. 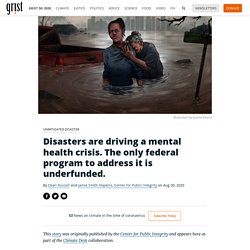 Barbara Herndon lay in the center of her bed, muscles tensed, eyes on the television. She was waiting for the storm. All morning on that day in late May, the news had covered the cold front slouching south from central Texas. By late afternoon, dense ropes of clouds darkened her Houston neighborhood. Rain whipped the windows. Herndon, who as a child in southern Louisiana saw her share of hurricanes and thunderstorms, had never thought much about them. Herndon is among the 50 percent of Houston-area residents who have wrestled with powerful or severe emotional distress since Hurricane Harvey deluged the city in 2017, according to a Rice University survey to be published Wednesday.

Smoke, heat, and COVID-19: Californians are caught between public health crises By Alexandria Herr on Aug 27, 2020. Wildfires have blazed across the West this month, burning millions of acres in California, Colorado, and Montana. 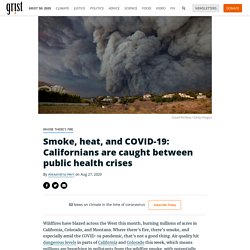 Where there’s fire, there’s smoke, and especially amid the COVID-19 pandemic, that’s not a good thing. Air quality hit dangerous levels in parts of California and Colorado this week, which means millions are breathing in pollutants from the wildfire smoke, with potentially dangerous impacts for public health. Fine particulate matter, or PM 2.5, is the biggest culprit for bad air quality following a wildfire event. Fine particulates are tiny solid and liquid particles that are suspended in the air, and wildfires produce lots of them. In Louisiana, grief surges with another storm. So does hope. By Princella Talley on Aug 28, 2020 at 3:55 am. Princella Talley is a public voices fellow of the OpEd Project and the Yale Program on Climate Change Communication, and an outreach coordinator and development associate with Citizens’ Climate Education. 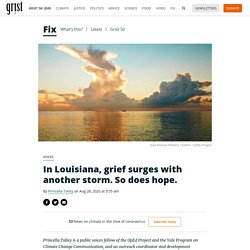 I live in the great state of Louisiana. It’s a state where you’ll most frequently hear two things from tourists and residents: The food is good, and the weather can make you feel as hot as the boil we dump our crawfish in. This week, the double whammy of storms Marco and Laura have placed Louisiana in a state of emergency just as we come upon the 15-year anniversary of Hurricane Katrina. That storm destroyed more than 800,000 homes and killed some 1,800 people, leaving thousands of New Orleans and South Louisiana residents with no place to call home, labeled “refugees” as they fled the costliest and most destructive storm in United States history.

It’s a time many of us wish we could forget. Fifteen years later, the psychological and economic destruction have not left us. As V.S. A California plan for wildfires that actually matches the scale of the problem By Nathanael Johnson on Aug 28, 2020 at 3:59 am. After four years of choking summer smoke, massive wildfires are starting to seem like they are a permanent fixture of life in the West. 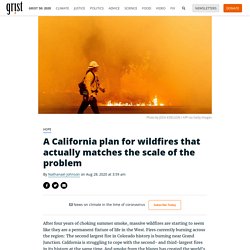 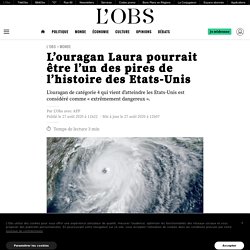 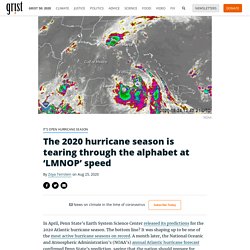 The bottom line? It was shaping up to be one of the most active hurricane seasons on record. A month later, the National Oceanic and Atmospheric Administration’s (NOAA’s) annual Atlantic hurricane forecast confirmed Penn State’s prediction, saying that the nation should prepare for between 13 and 19 named storms — an abnormally active hurricane season. Well, it’s not even September, and we’ve already seen 13 named storms.

Early Tuesday morning, post-tropical cyclone Marco — which briefly became a hurricane over the weekend before falling apart — made landfall near the mouth of the Mississippi River. “Both of these storms pose a flooding threat to the Louisiana coast regardless of whether they weaken or not,” Michael Mann, a climate scientist and one of the Penn State forecasters, told Grist on Monday. One solution to California’s blackouts? The world’s biggest battery. By Emily Pontecorvo on Aug 24, 2020 at 3:55 am. Move over, Australia — California has stolen the claim for largest battery installation in the world. 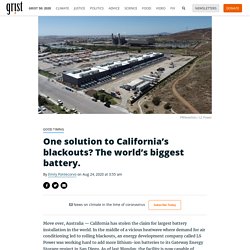 In the middle of a vicious heatwave where demand for air conditioning led to rolling blackouts, an energy development company called LS Power was working hard to add more lithium-ion batteries to its Gateway Energy Storage project in San Diego. As of last Monday, the facility is now capable of storing and dispatching 230 megawatts to the Golden State’s grid for one hour, and is set to beef up to 250 megawatts later this month. Why does Joe Biden call climate change an ‘enormous opportunity’? By Kate Yoder on Aug 24, 2020 at 3:59 am. Flanked by American flags, Joe Biden delivered an optimistic speech to accept the Democratic nomination for president last week, laying out his vision for the future of the country. 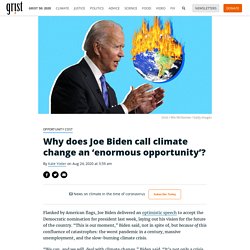 “This is our moment,” Biden said, not in spite of, but because of this confluence of catastrophes: the worst pandemic in a century, massive unemployment, and the slow-burning climate crisis. “We can, and we will, deal with climate change,” Biden said. “It’s not only a crisis, it’s an enormous opportunity. An opportunity for America to lead the world in clean energy and create millions of new good-paying jobs in the process.”

You’ve heard some version of this before: Every crisis brings with it an opportunity. Autour de la baie de San Francisco, les images de la Californie dévorée par les flammes Publié le 21 août 2020. If it’s August, the West must be on fire By Nathanael Johnson on Aug 21, 2020 at 3:58 am. The West is burning. 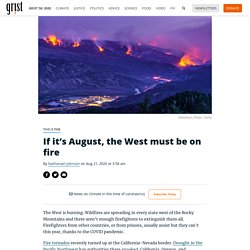 Wildfires are spreading in every state west of the Rocky Mountains and there aren’t enough firefighters to extinguish them all. Firefighters from other countries, or from prisons, usually assist but they can’t this year, thanks to the COVID pandemic. Fire tornados recently turned up at the California-Nevada border. Will fossil fuel sponsors be allowed at the next U.N. climate conference? By Emily Pontecorvo on Aug 20, 2020 at 3:55 am. For the first time ever, the most important international climate change conference will put its money where its mouth is. Or rather, other people’s money.

The irony: ConocoPhillips hopes to freeze thawing permafrost to drill more oil By Shannon Osaka on Aug 19, 2020 at 3:56 am. Living on a heating planet always comes with some ironies. For one thing, the people who are most to blame for global warming (the rich and powerful) are also shielded from its worst effects. Meanwhile, airlines push fossil-fuel burning tourist flights to see Antarctica’s melting ice, and cruise companies hype energy-intensive trips to see polar bears in the Arctic before they’re gone. The latest plan by ConocoPhillips may top them all. The Houston-based energy giant plans to produce 590 million barrels of oil from a massive drilling project in Alaska’s National Petroleum Reserve. But climate change is melting the ground in the reserve so fast that the company may be forced to use chilling devices to keep the ground beneath roads and drilling pads frozen. Yes, you read that right: An oil company is prepared to freeze melting permafrost in order to keep extracting oil.

The first undeniable climate change deaths By Daniel Merino on Aug 18, 2020. This story was originally published by Slate and is reproduced here as part of the Climate Desk collaboration. July 23, 2018, was a day unlike any seen before in Japan. It was the peak of a weekslong heat wave that smashed previous temperature records across the historically temperate nation. The heat started on July 9, on farms and in cities that only days earlier were fighting deadly rains, mudslides, and floods.

As the waters receded, temperatures climbed. Melting ice is a gift to the fossil fuel tankers navigating the Arctic By Maria Gallucci on Aug 17, 2020 at 3:59 am. A stocky blue 980-foot-long tanker named Christophe de Margerie sailed from Russia’s far-north Yamal Peninsula to the Bering Strait near Alaska in May, two months before such ships usually pass through a major Arctic sea route. The vessel carried and ran on liquefied natural gas, accompanied by the icebreaker Yamal on the 12-day journey.

Record-low ice levels along the route allowed its Russian owner, Sovcomflot, to ship the fossil fuel to China, completing the earliest voyage of its kind yet. If the milestone signals big opportunity for oil and gas producers, it also embodies two troubling trends for the rest of the planet. More large ships Like the Christophe de Margerie are running on liquefied natural gas, or LNG. That switch is resulting in higher emissions of methane, a potent greenhouse gas, according to a new report by international shipping experts.

The possibilities for hydrogen power seemed endless: It could fuel our cars, heat our homes, and even power our airplanes. But today, 175 years after the creation of that first “gas battery,” the technology has yet to reach its full potential. True, some of hydrogen power’s initial promise has borne fruit — there are cars running on compressed hydrogen cells (producing a trickle of water instead of toxic exhaust) and even some small H2-powered planes in development. Now, normally, H2 isn’t exactly a “clean” form of energy.

Green hydrogen could be crucial to decarbonizing industrial manufacturing. BP is dumping a ton of oil … from its energy portfolio By Emily Pontecorvo on Aug 5, 2020 at 3:55 am. Back in February, in the “before times,” oil giant BP announced a major new ambition: It would become a net-zero company by 2050. Although the company was very much stretching the definition of that phrase, and it didn’t intend to stop extracting, producing, or selling fossil fuels, the goals that it identified were significant. BP said it would work to reduce the emissions created by the products it sells — and in doing so, took much more responsibility for its role in climate change than any of its peers to date. Want to save lives? Name heat waves like hurricanes, experts say. By Shannon Osaka on Aug 5, 2020 at 3:58 am.

Last summer, a monstrous heat wave descended on the United States. Arctic fires released more carbon in two months than Scandinavia will all year By Maddie Stone on Aug 4, 2020. Extreme heat is worse in redlined neighborhoods. Peatlands could become a climate feedback loop we definitely don’t want to trigger By Alexandria Herr on Aug 3, 2020 at 3:56 am. Peatlands, a unique kind of wetland that stores high amounts of carbon in its soils, may start to release carbon as the climate warms, according to a new study from the Department of Energy’s Oak Ridge National Laboratory. Peatland bogs represent 3 percent of the earth’s land mass — primarily in the subarctic and in parts of the tropics — but store one-third of the earth’s total soil carbon. Trump Just Gutted One of the Most Important Environmental Protection Laws. Don’t Let Him Get Away With This! Undefined.