Kriticalmass : Powering Good. CrowdFunding platform for start-ups that ‘power good’ launches. Online Fundraising Website to Raise Money Online for a Cause. It will take anywhere from 3 seconds to 1 minute for your pic to upload, depending on how big it is. 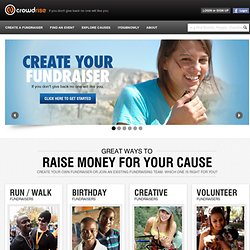 You're going to see this message every time you post a new pic. So, we're making the text really long so that it'll take you at least five picture uploads to read it all. Here's what we're thinking...While your first picture is uploading think about someone you want to kiss. When you upload your second pic think about one friend who you can beat in a race. On your third photo upload think about your favorite food that begins with the letter H. - where philanthropy meets entrepreneurship. Nonprofits Can Now Hold Fundraisers on Crowdtilt - Liz Gannes. Ioby.org (ioby)

Viral Philanthropy: The Impact of Crowdsourced Compassion. Ten reforms to grow the social investment market. The Origin of the Report Ten Reforms has been a long time in the making. The proposals set out in the report represent two years’ worth of detailed thought and reflection on the framework for social investment. Some of the early thinking on the issues covered in Ten Reforms is reflected in my report Investing in Civil Society: A Framework for a Bespoke Regime, which was published by NESTA in June 2011. This report led to my secondment to the Cabinet Office from August 2011 to January 2012 to advise the Government on steps it could take to remove legal and regulatory barriers to social investment. The Promise of Crowdfunding for Social Enterprise. Posted by Doug Rand on June 28, 2012 at 06:15 PM EDT Earlier this month, the White House hosted a briefing for the American Sustainable Business Council, a national network serving social enterprises from early-stage startups to established success stories, like Patagonia and Ben & Jerry’s. 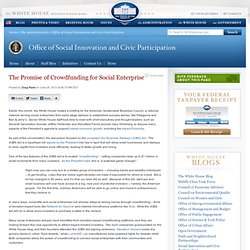 Last week, the Senate passed the Jobs Act, which contains equity crowd-funding legislation, an idea, as I wrote in a previous post, whose time I believe has come. 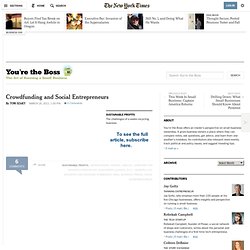 Having led TerraCycle through its early days and subsequent rounds of funding, I believe that crowd-funding holds real promise for early-stage social entrepreneurs. Equity crowd-funding would allow start-ups to raise seed capital from any number of investors in small amounts through emerging equity crowd-funding platforms like Launcht in the United States and Crowdcube in the United Kingdom. These online platforms will shepherd start-ups through the process and put their businesses in front of a network of investors who want to support new companies. Rally helps with crowdfunding for social causes. Crowdfunding can be a pretty wonderful thing. 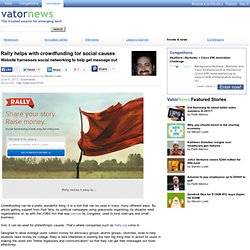 It is a tool that can be used in many, many different ways. By artists getting support from their fans, by political campaigns using grassroots organizing, by disaster relief organizations or, as with the JOBS Act that was passed by Congress, used to fund start-ups and small business. And, it can be used for philanthropic causes. Crowdfunded company takes a cue from Toms shoes. Previously, securities laws required equity investors to be “qualified,” meaning they had to show they had the wealth to invest. 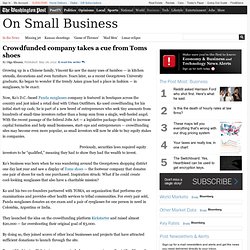 Ko’s business was born when he was wandering around the Georgetown shopping district one day last year and saw a display of Toms shoes — the footwear company that donates one pair of shoes for each one purchased. Inspiration struck: What if he could create cool-looking sunglasses that also have a charitable mission? Ko and his two co-founders partnered with TOMA, an organization that performs eye examinations and provides other health services to tribal communities.

Ideas Marketplace Mission. What is the Respekt.net Projects: www.respekt.net. The StartSomeGood Difference. Dave Boyce Of Fundly Offers Advice On Crowdfunding - Business News. With the concept of crowdfunding spreading to allow for small investments in new companies, we thought it was a smart idea to check in with someone who has shown the model can work in the nonprofit and cause space. 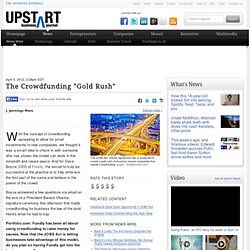 And for Dave Boyce, CEO of Fundly, the secret to truly be successful at the practice is to fully embrace the first part of the name and believe in the power of the crowd. Boyce answered a few questions via email on the eve of a President Barack Obama signature ceremony this afternoon that made crowdfunding for business the law of the land. Crowd funding, clean technology, renewable energy, We The Lobby. Raise5: Fundraising Through Micro-Volunteering for Charities, Non-Profits. GreenUnite (greenunite) Microfinance from CARE International UK. Globe Forum. Crowd funding is an option for non-profit organizations?

Start Some Good: Igniting Ideas, Investment & Impact. WeDidThis. Crowdfunding charity workers’ wages. The only crowdfunding site that combines creative projects, events with charitable fundraising. Using Crowdfunding To Fuel Urban Renewal. It’s estimated that there are as many as 40,000 abandoned properties and vacant lots in Philadelphia, 75% of which are owned by private landlords who are unwilling or unable to make them safe and livable spaces. The neglected properties often attract crime, creating major challenges for a city whose homicide rate for 2011 was number one out of the top 10 largest cities in the U.S. 11 Innovative Crowdfunding Platforms for Social Good.

TakePart - News, Culture, Videos and Photos That Make the World Better. Grozny Project crowdfunding campaign - why it's crucial to support us NOW. It has been amazing journey of almost two months since we launched our campaign on Emphas.is – the website that offers photojournalists a chance to interact directly with the public and to secure funding outside of the mainstream media. 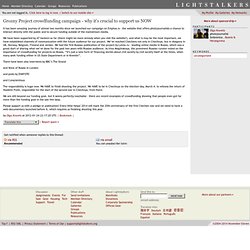 We have been supported by 47 backers so far (there might be more already when you visit the website!) , and what is may be the most important, we have established channels of communication with the future audience for our project. Personal Internet Fundraisers. Lucky Ant - Welcome to Lucky Ant! Crowdfunding charity workers’ wages.

How Crowdsourcing Is Improving Global Communities. The Global Innovation Series is supported by BMW i, a new concept dedicated to providing mobility solutions for the urban environment. 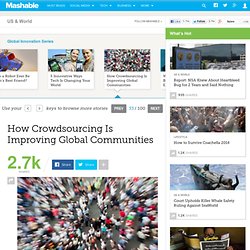 It delivers more than purpose-built electric vehicles — it delivers smart mobility services. Visit bmw-i.com or follow @BMWi on Twitter. You can crowdsource almost anything these days — news, music videos, fashion advice, your love life or even your entire life. While these examples are all very useful (or just plain amusing), there are a plethora of examples of how innovative entrepreneurs and eager philanthropists are using crowdsourcing techniques to improve local and global communities in real, substantive ways.

Below are examples of how individuals are taking part in crowdsourced microloans, direct funds and volunteer efforts aimed at bettering their communities. GiveCorps. Crowdfunding Case Study: How appbackr Worked for Popvox. Marci Harris, CEO of Popvox JakeBrewer/Flickr Marci Harris, CEO of Popvox, explains why the online advocacy and legislative data platform turned to crowdfunding site appbackr to finance its mobile offering for members of Congress. When the U.S. House of Representatives began allowing members to use iPads on the House floor this year, Marci Harris saw an opportunity. Sustainability and Green Initiatives: United Nations organized “crowdfunding” to raise money to stop oil drilling in the Ishpingo-Tambococha-Tiputini oil fields in Ecuadorian Amazon region.

Entrepreneurs see a chance for profit in niche crowd-funding for charities. 13 Essential Resources for Socially Responsible Companies. Worldwide Crowdfunding Initiative Pays Ecuador $116m to Save Rainforest. Crowdfunding helps people unite for a good cause, new forms of online charity emerge. How Crowdfunding Saved 722 Square Miles of Rainforest - Environment. In 2007, Rafael Correa, president of Ecuador, made an offer to the rest of the world. 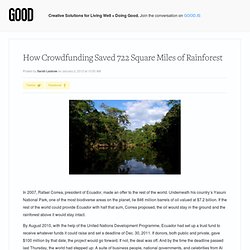 Underneath his country’s Yasuni National Park, one of the most biodiverse areas on the planet, lie 846 million barrels of oil valued at $7.2 billion.