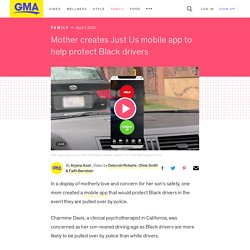 Another study conducted by Harvard researchers found that Black people were more than three times as likely to be killed during a police encounter. The Guardian view on Boris Johnson's race review: you cannot be serious. Boris Johnson’s race review reported on Wednesday, although one might be forgiven for thinking that its conclusions were written out long ago. 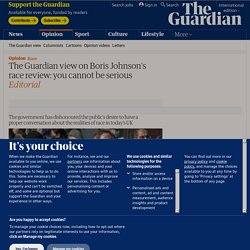 Setting up the commission last summer, the prime minister described its job as to “change the narrative so we stop the sense of victimisation and discrimination”. The head of his policy unit, Munira Mirza, has attacked what she calls “the anti-racism lobby and … its culture of grievance”. The personnel seem to have been appointed accordingly. Steve Bell on the Commission on Race and Ethnic Disparities report – cartoon. The Sewell report displays a basic misunderstanding of how racism works. When Boris Johnson established a new commission on race and ethnic disparities after the Black Lives Matter protests last year, many doubted how serious this body would be. 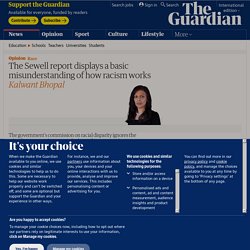 Its chair, Tony Sewell, had in the past openly questioned the existence of institutional and structural racism. Now the commission’s first report has been published, it’s even clearer that its purpose was to whitewash the problems of racism in Britain. The 264-page report argues that the UK has become a “more open society” in which issues of race and racism are becoming less important for explaining persistent inequalities. According to its authors, the report’s findings challenge the view that Britain has “failed to make progress in tackling racial inequality”, and suggest that the “well-meaning ‘idealism’ of many young people who claim the country is still institutionally racist is not borne out by evidence”. How Hollywood Is Complicit in Violence Against Asians in America - Variety. Reading the comments is rarely a good idea. 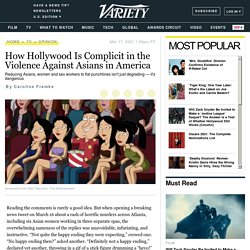 But when opening a breaking news tweet on March 16 about a rash of horrific murders across Atlanta, including six Asian women working in three separate spas, the overwhelming sameness of the replies was unavoidable, infuriating, and instructive. How to Diversify Your British Literature Class - Building Book Love. Harnarayan Singh reflects on Hockey Night in Canada play-by-play debut. Last week was a dream come true for Harnarayan Singh. 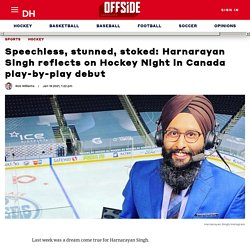 The longtime voice of Hockey Night Punjabi was asked to call play-by-play for an NHL game on Sportsnet last week — in English — for the first time. This would be a big moment for any broadcaster, but it’s especially noteworthy for Singh, who is a pioneer for the South Asian community. Then on Saturday, Singh got an even greater honour, calling a game for Hockey Night in Canada. “I was absolutely speechless, I was stunned, and I was stoked,” Singh told Daily Hive when asked what his reaction was to getting tapped to call the Canucks-Oilers game last Wednesday. GitHub apologizes for firing employee who warned of Capitol attack Nazi link. GitHub, a technology firm owned by Microsoft, apologized on Sunday for what its COO, Erica Brescia, called “significant errors in judgment” following outrage that it had fired an employee, who is Jewish, for warning that “Nazis” were among the pro-Donald Trump mob who attacked the US Capitol on 6 January. 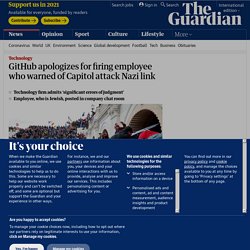 “In light of these findings, we immediately reversed the decision to separate with the employee and are in communication with his representative,” Brescia wrote in a blogpost. “To the employee, we wish to say publicly: we sincerely apologize.” According to Insider, which first reported the firing, the tech firm terminated the employee two days after he predicted the insurrection’s potential Nazi links in a company chat room. The message allegedly cautioned “stay safe homies, Nazis are about”. The firing garnered immediate outcry among staff.

Ginella Massa is revolutionizing Canadian television…again. The history-making journalist discusses diversifying newsrooms and the conversations Canada needs to have before she premieres her new primetime show, Canada Tonight with Ginella Massa Courtesy of CBC Ginella Massa is hosting her own primetime news and current affairs talk show on CBC News Network. 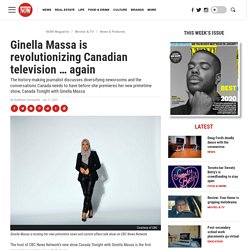 Nike (NKE) Brings Social Justice Ads to Japan. The Results Are Mixed. Photographer: Nike/YouTube Two years ago, Nike Inc. put politics at the center of its U.S. marketing strategy, embracing Black activist and former NFL quarterback Colin Kaepernick as the face of its 30th anniversary “Just Do It” campaign. 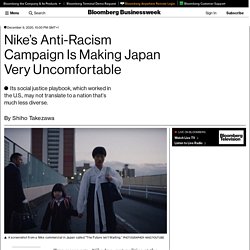 Now it’s testing a new market for its anti-racism message: Japan. Nike Japan’s latest ad, released in late November, features three young women, including one who’s biracial and one who’s ethnically Korean, who grapple with racism and bullying but find refuge and joy in their excellence on the soccer field. The company said the ad was inspired by accounts from real athletes in Japan. Top Canadian film producers push back against Telefilm’s diversity measures. Members of the film community have said the Canadian film funding system is archaic and unfair, arguing for an overhaul to make room for greater representation among the movie projects that get government financing. 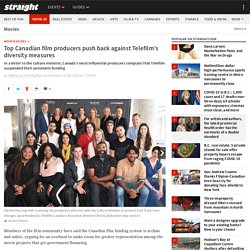 Over the past few months, Telefilm Canada has been responsive to increased calls for more transparency and diversity, while initiating a process to change film funding rules. But a small group of top producers who benefit the most from the national agency’s funding have written a letter to Minister of Canadian Heritage Steven Guilbeault asking for an intervention. We obtained multiple versions of the letter, each with a growing list of producers. The letter focuses largely on the fate of a Telefilm funding program for top Canadian producers called Fast Track.

“We wrote a letter that we thought was going to a specific person for our specific cause,” says Rhombus Media producer Niv Fichman (Enemy, Possessor), adding that the letter was never meant to be public. Instagram censored one of these photos but not the other. We must ask why. Last week brought an issue to the attention of millions of Instagram users – one that we in marginalised communities have been aware of for years: the Instagram algorithm favours thin, white, cisgendered people and effectively censors the rest of us. 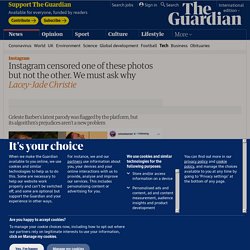 On Friday, Australian comedic juggernaut Celeste Barber posted the latest in her #CelesteChallengeAccepted series of parody images to her audience of 7.3 million: a side-by-side photo of her imitating a post from former Victoria’s Secret model Candice Swanepoel, clutching her bare breast and exposing side boob. But while both photos revealed the exact same parts of each body (Barber, in fact, added a string bikini), Instagram wouldn’t let fans share Barber’s post, notifying some users that it “goes against our community guidelines on nudity or sexual activity”.

Violent video games and rap songs had nothing to do with it; nor did poverty, education, two-parent homes or the international “bootstraps” shortage. When a judge tasked researchers with explaining why Massachusetts’ Black and Latinx incarceration was so high, a four-year study came up with one conclusion. Racism. Untitled. Legacies of British Slave-ownership. The Centre for the Study of the Legacies of British Slave-ownership has been established at UCL with the generous support of the Hutchins Center at Harvard.

The Centre will build on two earlier projects based at UCL tracing the impact of slave-ownership on the formation of modern Britain: the ESRC-funded Legacies of British Slave-ownership project (2009-2012), and the ESRC and AHRC-funded Structure and significance of British Caribbean slave-ownership 1763-1833 (2013-2015). Colonial slavery shaped modern Britain and we all still live with its legacies. Untitled. Untitled. Write what you know. It’s oft-cited advice for writers both beginning and established. Thus, Jules, the teenage boy at the center of Christian Cooper’s It’s a Bird, the first entry in DC Comics’ digital-first anthology series Represent!

, is a birdwatcher, like the author. And the binoculars that were a 50th birthday gift from Cooper’s father, a Korean War vet and Civil Rights activist, serve as models for the ones Jules is none too thrilled to receive, despite his grandpa’s belief that they possess special powers. Cooper, who was was Marvel's first openly gay writer and editor, introducing a number of queer characters before devoting himself to science writing, also draws on recent personal history that is more fraught.

Although the location has shifted from New York City’s Central Park to a suburban green space bordered with large, well-kept homes, including Jules’, the young man’s encounter with an indignant white woman and her off-leash dog should ring any number of bells. Read Represent! Untitled. Student's response to a school assignment bravely challenges its cultural assumptions. When we hear about racial bias in education, we might picture things like disparities in school funding, disciplinary measures, or educational outcomes.

But it can also show up in the seemingly simplest of school assignments—ones that some of us wouldn't even notice if we don't look outside our own cultural lens. Ericka Bullock-Jones shared one such instance on Facebook, with her daughter's responses to questions on a high school ancestry assignment. "My kids go to a pretty much all white school," she wrote. "They got an assignment yesterday asking them to talk to their relatives and document how their families came to 'immigrate' to the US. The teacher asked for details about the 'push and pull of the decision' and really made it sound like a light hearted assignment. Untitled. Walking along Union Street next to the Dunsmuir Viaduct isn't so grey and dreary anymore.

Jessica Krug is a symptom of a bigger problem: the way blackness is appropriated. Sign up for the Week in Patriarchy, a newsletter​ on feminism and sexism sent every Saturday. What leads a person to white supremacy? One man’s story. Leonardo Santamaria For over two decades, Christian Picciolini, who once led a white supremacist organization, has worked as a peace advocate and “hate breaker”, helping disengage people — including neo-Nazis, white nationalists and Islamist jihadists — from extremist groups. In his new book Breaking Hate, he draws on the experiences of people that he’s met, revealing how violent movements target the most vulnerable and exploit their human desires and how the right interventions can save lives.

Online Exhibition - Angela Davis OUTspoken — GLBT Historical Society. With her national visibility increasing, Davis received hate mail and death threats, but she persisted in speaking out. Visions of Angela Davis: An archivist shares her rare political poster trove. Angela Davis’ image is one the most widely recognized in the world. But what generations of activists, especially those born of the Internet era, might forget is that behind the prevalence of her inspiring face were the tedious, steadfast efforts of collectors and archivists. Coming to Terms With My Father's Racism. I live in Cleveland, where a 12-year-old black boy named Tamir Rice was recently shot and killed by a white police officer. The community at large professed outrage, but when I attended his public funeral it was filled with black mourners, and I left wondering if maybe most of us white people think this isn’t our problem anymore.

Untitled. The end of slavery, and the war that brought it about, transformed American funerals across races. It was the massive death toll of the Civil War—the bloodiest conflict in U.S. history—that brought the modern American funeral industry into being. With so many soldiers dying on battlefields far from home, families scrambled to ship bodies home. Until the war, embalming was practiced primarily by doctors and scientists.