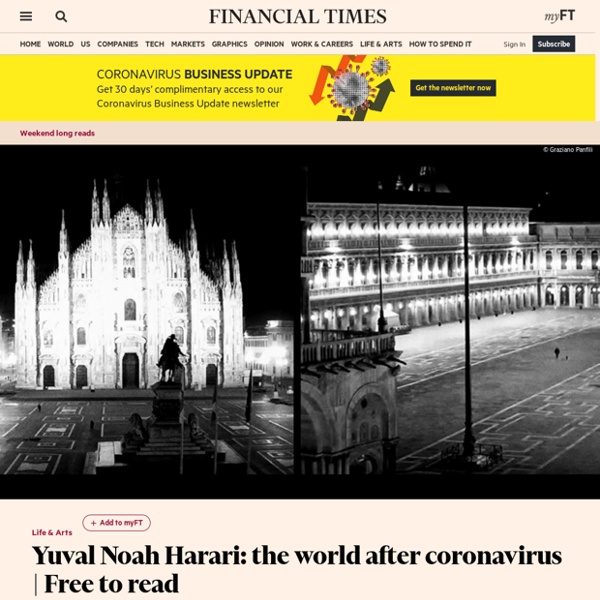 Humankind is now facing a global crisis. Perhaps the biggest crisis of our generation. The decisions people and governments take in the next few weeks will probably shape the world for years to come. They will shape not just our healthcare systems but also our economy, politics and culture. We must act quickly and decisively. We should also take into account the long-term consequences of our actions. Many short-term emergency measures will become a fixture of life. In this time of crisis, we face two particularly important choices. Under-the-skin surveillance In order to stop the epidemic, entire populations need to comply with certain guidelines. In their battle against the coronavirus epidemic several governments have already deployed the new surveillance tools. About the photography The images accompanying this article are taken from webcams overlooking the deserted streets of Italy, found and manipulated by Graziano Panfili, a photographer living under lockdown The emergency pudding

A list of resources for supporting the Black Lives Matter movement A week on from the brutal killing of George Floyd by white police officers in Minneapolis, it’s almost impossible for many of us to even comprehend the pain and anger that many in the Black community are feeling right now, both in the US and around the world. The fact that, for many, this doesn’t represent a watershed moment, but instead is something that’s dealt with on a daily basis, only serves to deepen the anguish. There’s nothing we can say that hasn’t already been said far more poignantly by countless others. So instead of rehearsing those thoughts and sentiments, we want to use our small corner of the internet to share resources; to amplify Black voices; and to support the demonstrations currently going on in any other ways we can.

Coronavirus has not suspended politics – it has revealed the nature of power We keep hearing that this is a war. Is it really? What helps to give the current crisis its wartime feel is the apparent absence of normal political argument. The prime minister goes on TV to issue a sombre statement to the nation about the curtailment of our liberties and the leader of the opposition offers nothing but support. Regional Director - Statement – Invest in the overlooked and unsung: build sustainable people-centred long-term care in the wake of COVID-19 Statement to the press by Dr Hans Henri P. Kluge, WHO Regional Director for Europe 23 April 2020, Copenhagen, Denmark

Trade unions urge EU to investigate Amazon effort to spy on workers European trade union leaders, including three UK unions, have called on the European commission to open an investigation into Amazon’s “potentially illegal” effort to spy on workers for union activities. The heads of some of Europe’s biggest unions, representing more than 12 million workers, wrote to the commission to demand an investigation into Amazon’s work practices across the continent. The move comes after the US tech firm advertised jobs for which part of the description was investigating the threat of organised labour against the company. Paddy Lillis, the general secretary of Usdaw, along with Mick Rix, a national officer of GMB, and Dave Ward, the general secretary of the Communication Workers Union, are among the 37 signatories to the letter. They also include the German union ver.di, the French Democratic Confederation of Labour and Spain’s biggest trade union, CCOO. Amazon has been contacted for comment.

Canterbury Tales is first major literary work developed as an app A University of Saskatchewan-led international team has produced the first web and mobile phone app of Geoffrey Chaucer's The Canterbury Tales—the first major literary work augmented by new scholarship, in any language, presented in an app. "We want the public, not just academics, to see the manuscript as Chaucer would have likely thought of it—as a performance that mixed drama and humor," said University of Saskatchewan (USask) English professor Peter Robinson, leader of the project. "We have become convinced, over many years, that the best way to read the Tales is to hear it performed—just as we imagine that Chaucer himself might have performed it at the court of Richard II." The free app is the first edition in a planned series. The app features a 45-minute audio performance of the General Prologue of the Tales—the masterpiece work by the most important English writer before Shakespeare—along with the digitized original manuscript. This document is subject to copyright.

Regional Director - Statement – Transition to a ‘new normal’ during the COVID-19 pandemic must be guided by public health principles Statement to the press by Dr Hans Henri P. Kluge, WHO Regional Director for Europe 16 April 2020, Copenhagen, Denmark Good morning. Thank you for joining us once again.

Corporate Surveillance in Everyday Life Google and Facebook, followed by other large platforms such as Apple, Microsoft, Amazon and Alibaba have unprecedented access to data about the lives of billions of people. Although they have different business models and therefore play different roles in the personal data industry, they have the power to widely dictate the basic parameters of the overall digital markets. The large platforms mostly restrict how other firms can directly obtain their data; in this way, they force them to utilize the platform’s data on users within their own ecosystems and gather additional data from beyond the platforms’ reach. Although the large multinationals in different sectors that have frequent interactions with hundreds of millions of consumers are in a somewhat similar position, they not only acquire consumer data collected by others, but often also provide data.

Explainer: what is systemic racism and institutional racism? At the 2020 BAFTA awards, Joaquin Phoenix called out systemic racism in the film industry in his acceptance speech for leading actor. He said: I think that we send a very clear message to people of colour that you’re not welcome here. Coronavirus pandemic leading to huge drop in air pollution The coronavirus pandemic is shutting down industrial activity and temporarily slashing air pollution levels around the world, satellite imagery from the European Space Agency shows. One expert said the sudden shift represented the “largest scale experiment ever” in terms of the reduction of industrial emissions. Readings from ESA’s Sentinel-5P satellite show that over the past six weeks, levels of nitrogen dioxide (NO2) over cities and industrial clusters in Asia and Europe were markedly lower than in the same period last year.

'We did it to ourselves': scientist says intrusion into nature led to pandemic The vast illegal wildlife trade and humanity’s excessive intrusion into nature is to blame for the coronavirus pandemic, according to a leading US scientist who says “this is not nature’s revenge, we did it to ourselves”. Scientists are discovering two to four new viruses are created every year as a result of human infringement on the natural world, and any one of those could turn into a pandemic, according to Thomas Lovejoy, who coined the term “biological diversity” in 1980 and is often referred to as the godfather of biodiversity. “This pandemic is the consequence of our persistent and excessive intrusion in nature and the vast illegal wildlife trade, and in particular, the wildlife markets, the wet markets, of south Asia and bush meat markets of Africa… It’s pretty obvious, it was just a matter of time before something like this was going to happen,” said Lovejoy, a senior fellow at the United Nations Foundation and professor of environment science at George Mason University.

What Does It Mean to ‘Solve’ the Problem of Discrimination in Hiring? by Javier Sánchez-Monedero, Lina Dencik, Lilian Edwards Abstract Discriminatory practices in recruitment and hiring are an ongoing issue that is of concern not just for workplace relations, but also for wider understandings of economic justice and inequality. Yet the way decisions are made on who is eligible for jobs, and why, are rapidly changing with the advent and growth in uptake of automated hiring systems (AHSs) powered by data-driven tools .A recent report estimated that 98% of Fortune 500 companies use Applicant Tracking Systems of some kind in their hiring process.

to control such disease, citizens around the world are giving up their freedom and information in order to be assured safety by their government. A trend in security will definitely be something we will be seeing. by maymanatshayan Mar 31