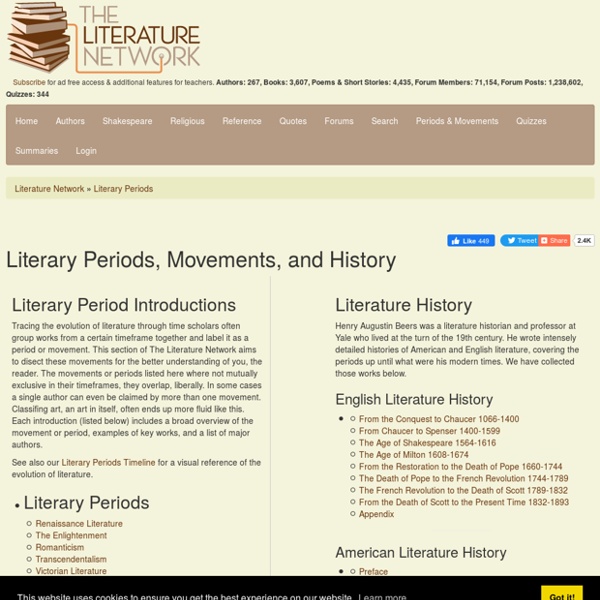 45 Great Sourced Quotes about Books The best quotes about books, from some of the most famous writers in the world Here is a list of our favourite quotes about books from various writers, some famous, some not so famous. We’ve only included those quotations for which we’ve managed to track down a source, whether in print or online, so you know these are authentic quotes about books, rather than of the amusing-but-apocryphal kind. When I was a child I read books far too old for me and sometimes far too young for me.

The Romantic Age: Topic 2: Overview The Gothic begins with later-eighteenth-century writers' turn to the past; in the context of the Romantic period, the Gothic is, then, a type of imitation medievalism. When it was launched in the later eighteenth century, The Gothic featured accounts of terrifying experiences in ancient castles — experiences connected with subterranean dungeons, secret passageways, flickering lamps, screams, moans, bloody hands, ghosts, graveyards, and the rest. By extension, it came to designate the macabre, mysterious, fantastic, supernatural, and, again, the terrifying, especially the pleasurably terrifying, in literature more generally. Closer to the present, one sees the Gothic pervading Victorian literature (for example, in the novels of Dickens and the Brontës), American fiction (from Poe and Hawthorne through Faulkner), and of course the films, television, and videos of our own (in this respect, not-so-modern) culture.

How English and German are related and how their vowel sounds developed Once long ago there were a group of people known variously as the Saxons, Angles, Jutes and Franks. We don't know what they called their language but we call it Proto Germanic. It is called this because it is the ancestor of all Germanic languages. The Germanic languages include languages like English, German, Dutch, Frisian, German, Luxembourgish, Swedish, Danish, Norwegian, Icelandic, Faroese and others. My favourite part of linguistics is looking at how languages change over time. 13 Essential Literary Terms by Dictionary.com Slideshow 13 Essential Literary Terms [met-uh-fawr, -fer] Aristotle wrote that mastery over the art of metaphor is a sign of genius, but what does this ubiquitous literary term mean in its most basic form?

96 Incredibly Useful Links for Teaching and Studying Shakespeare The idea of tackling Shakespeare in school has sometimes sent chills down both students’ and teachers’ spines, but the truth is that studying Shakespeare doesn’t have to be so daunting. His plays and sonnets are filled with themes that are relevant even today, are humorous, lyrical, and provide important historical content. Most importantly, Shakespeare knew how to tell a good story. One Language, Many Voices - Accents and dialects Short description: Recordings in this collection can be played by anyone. This selection of recordings documents the way that people define their own accent. The collection, created between November 2010 and April 2011 by visitors to the British Library exhibition, Evolving English: One Language, Many Voices includes descriptions of accents influenced by geography, education, friends, family, occupation, social class and the media.

Download 20 Popular High School Books Available as Free eBooks & Audio Books Every year, thousands of American high school students read a common selection of great novels — classics loved by young and old readers alike. Today, we have selected 20 of the most popular books and highlighted ways that you can download versions for free, mostly as free audio books and ebooks, and sometimes as movies and radio dramas. You will find more great works — and sometimes other digital formats — in our twin collections: 600 Free eBooks for iPad, Kindle & Other Devices and 550 Free Audio Books. So please give them a good look over, and if we’re missing a novel you want, don’t forget Audible.com’s 14 day trial.

Ian McKellen Reads a Passionate Speech by William Shakespeare, Written in Defense of Immigrants The identity of William Shakespeare has been a literary mystery for four hundred years, inspiring theory after theory, book after book. There has been, indeed, little biographical evidence to work with, though paleographer and “literary detective” Heather Wolfe has very recently filled in some critical gaps. It was long thought that Shakespeare’s will, in which he bequeaths to his wife his “second best bed,” was the only document in his hand, aside from a few signatures here and there. Since around the turn of the 20th century, however, scholars have come to agree that three pages of a manuscript in an Elizabethan play called Sir Thomas More contain Shakespeare’s handwriting. The play, writes the British Library—who house the physical pages and have digital scans at their site—tells the story of “the Tudor lawyer and polymath who was sentenced to death for refusing to recognise Henry VIII as Supreme Head of the Church in England.”

No-deal Brexit: 10 ways it could affect you Image copyright Getty Images Prime Minister Boris Johnson has vowed to leave the EU "come what may" by the 31 October - the date the UK must depart if no deal has been reached. An extra £2.1bn of funding has been announced to prepare for such a no-deal Brexit. How could you be affected if the UK does leave the EU without an agreement? 1. The Four Things Students Need to Create Good Book Trailers Creating book trailer videos is a great alternative to a traditional written book report assignment. In a book trailer video students highlight their favorite elements of a story and try to entice viewers to read the book themselves. Much like a movie trailer that tries to get viewers to watch the full movie, a book trailer should give viewers just enough to be interested in the full story without giving away the conclusion to the story. If you have heard of book trailers and wanted to try having your create book trailers, here are the four things they'll need to get started after reading a book. A script/ outline: Before I let students start to assemble a video, I make them write a script or outline for the video.

George Orwell Explains How "Newspeak" Works, the Official Language of His Totalitarian Dystopia in 1984 As we noted yesterday, and you likely noticed elsewhere, George Orwell’s classic dystopian novel 1984 shot to the top of the charts—or the Amazon bestseller list—in the wake of “alternative facts,” the latest Orwellian coinage for bald-faced lying. The ridiculous phrase immediately produced a barrage of parodies, hashtags, and memes; healthy ways of venting rage and disbelief. But maybe there is a danger there too, letting such words sink into the discourse, lest they become what Orwell called "Newspeak." It’s easy to hear “Newspeak,” the “official language of Oceania,” as “news speak.” This is perfectly reasonable, but it gives us the impression that it relates strictly to its appearance in mass media.